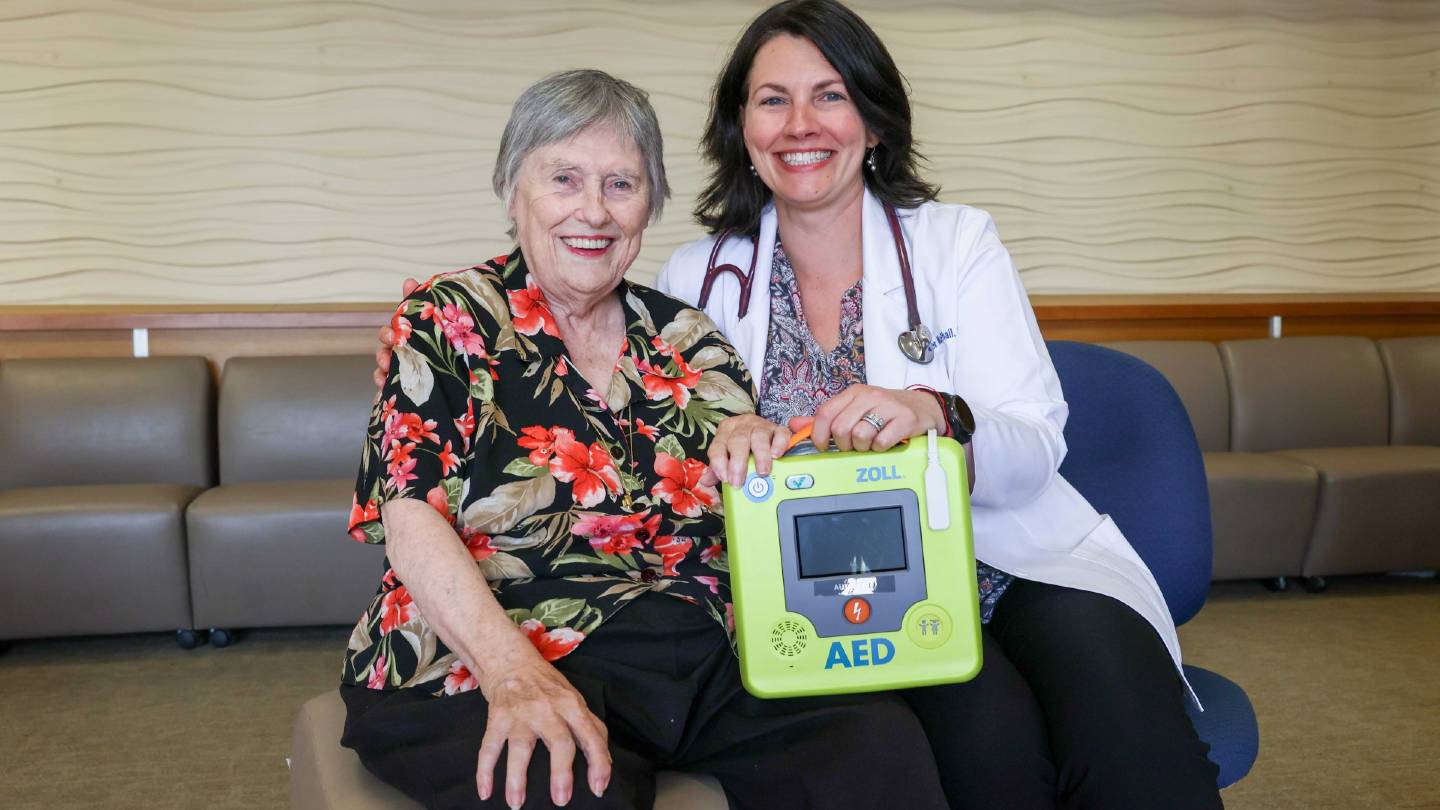 For alumna Amber McPhail (BSN, Nursing, 2001; MSN, FNP, 2003), an afternoon of routine appointments at the Faculty and Staff Clinic turned into anything but one fateful day in April 2017. That was the day a life-and-death emergency struck like a spring thunderbolt on the campus of The University of Alabama in Huntsville (UAH), a part of The University of Alabama System.

McPhail is the UAH Director of Student Health Services and Interim Director of UAH Health Services, located on the third floor of Wilson Hall. Five years ago, Patricia “Miss Patti” Patrick was attending a group discussion in the same building only two floors down as a member of the Osher Lifelong Learning Institute at UAH (OLLI at UAH). Neither of them could have guessed how dramatically their lives were about to intersect, a moment in time they both will likely remember for the rest of their lives.

“I have been a member of OLLI for several years and have taken a number of classes,” Miss Patti Patrick says. “On that day I was taking a class called Socrates Café where we discussed current controversial events. We had discussed a lot of things politically for a year or so, and this was the very first day of spring class, one o’clock on Monday, April 17, 2017. I was sitting there in my wheelchair, and I started the class by saying I had finally found something I agreed with the President about! And then I died!”

Meanwhile, two floors above in the Faculty Staff Clinic, McPhail was attending to an ordinary office visit with no idea of the drama unfolding below her, when someone burst into the clinic.

“I was in the FSC clinic seeing a patient, when our Office Manager came to get me out of the exam room,” McPhail recalls. “She said that Ms. Altenkirch was here and said someone had passed out downstairs on the first floor.”

“Ms. Altenkirch” turned out to be none other than Beth Altenkirch, wife of then UAH President, Robert A. Altenkirch. She was there attending the same OLLI course as Miss Patti as part of the member-based learning community for adults age 50-plus.

“I followed Ms. Altenkirch down to the lobby where Mrs. Patti was sitting, slumped over and gasping,” McPhail says. “I couldn't feel a pulse, so I moved her over to the carpet to lay her down to check her ABCs (Airway, Breathing, Circulation/pulse). I directed one of the OLLI staff to go get the AED.”

AED stands for ‘automated external defibrillator,’ a portable device used as a rapid response method to save lives during a cardiac arrest. If you've ever watched a TV medical drama, chances are you've seen someone shocked back to life by a health care provider who yells "Clear" before delivering a jolt of electricity to the person's chest to get the heart beating again. AEDs don’t require a prescription and can be used at home and in schools and are also found in a number of public places, such as malls, office buildings, sports arenas, gyms and airplanes.

“There are 93 AEDs on campus, to include Redstone,” says Kristi Dendy, Campus Safety Specialist in the Office of Environmental Health and Safety at Shelbie King Hall. “This is the first time one has actually been used that we know of.”

The units are located on odd numbered floors in campus buildings, usually near an elevator. Once switched on, the lightweight device provides the operator with step-by-step voice instructions. “The AED doesn't require anyone to actually have any special training to use it, as long as they can follow directions,” McPhail says. “As long as they think to actually get the AED – they can do it!  It tells you when to shock, and it won't let you shock if it is not advised/indicated.”

AEDs are designed to be used in the sort of situation where speed can make all the difference in patient outcomes, exactly the case when Miss Patti collapsed.

“She was barely breathing, and I couldn't feel a pulse,” McPhail says after examining Miss Patti on the floor of the lobby in front of the Wilson Hall Theatre. “So I immediately applied the AED pads to her chest and turned on the device. It announced that it was analyzing and said not to touch the patient.”

Cardiac arrest usually occurs when a disruption in the heart's electrical activity causes a dangerously fast heartbeat (ventricular tachycardia) or a fast and irregular heartbeat (ventricular fibrillation). Either of these irregular rhythms keeps the heart from pumping effectively and can cause it to stop. When this happens, the brain and other vital organs don't get the blood and oxygen they need and requires treatment within minutes to prevent death. Also, the sooner the heart's rhythm is restored, the greater the chance there won't be permanent damage to the brain and other organs. Cardiopulmonary resuscitation (CPR) after cardiac arrest can keep blood flowing to the heart and brain for a time, but often only defibrillation can restore the heart's rhythm.

Once the AED had rapidly completed its analysis of Miss Patti’s condition, it was time to signal the defibrillator to deliver its lifesaving jolt.

“It said, ‘Shock Advised, please clear the victim,’” McPhail remembers. “I then cleared her and pressed the 'shock' button which delivered a defibrillation to the patient. After that, it told me to continue with CPR/chest compressions. I started chest compressions and at that same time the EMTs arrived.”

What some might call an astonishing series of fortunate circumstances working for her survival, Miss Patti sees as nothing short of miraculous set of events.

“There were so many factors that happened!” she says. “The wife of the then president of UAH was a member of our group, and she was there and saw what had happened. That was miracle number 1! She had just toured the medical facilities on the third floor of Wilson Hall, so she ran upstairs and brought the nurse down, which was miracle number 2! The fact that they had the paddle thing [AED] in the hall, that was miracle number 3!”

McPhail made sure the miracles didn’t go for naught by continuing CPR and monitoring the AED until the EMTs arrived on the scene. “They kept her on our AED while we continued chest compressions, gave her breaths using their ambu bag and started an IV,” the Nursing alumna says. “The AED again announced it was 'analyzing patient and to pause compressions.’ After a few seconds it said, ‘Shock advised, please clear the victim.’ I again cleared the patient and pressed the 'shock' button. After the defibrillation, they continued compressions and switched the heart monitor over to their machine. Then they loaded her onto their stretcher and proceeded to transport her to the hospital emergency department.”

One might wonder what Miss Patti herself was experiencing during such intense trauma as several strangers battled to save her life.

“It was a total blank!” she reports. “I just disappeared; everything was totally gone. I have no memory of anything from that moment on until about five days later, because they had to do all kinds of things to save my life, like put me into a coma in a very cold situation to preserve my primary organs. I had to be in rehab for two and a half weeks. I looked awful. My niece was there when I woke up, and the first thing I said was, where’s my purse! She knew for sure I wasn’t brain dead!”

Just 11 days before, the OLLI student had had a colonoscopy, “and it wiped out my potassium,” Miss Patti says. “My heart doctor knew right off what had happened. I have to take potassium every night for rest of my life.”

But that’s a minor annoyance, as she approaches each day with new zest since having been given her life back.

“I’m 82, but I can remember stuff way on back,” Miss Patti says. “The neurologist pointed to the heavens like ‘you had a really good break there.’ I had some of the normal feelings. Why me? Why did I survive this? It was such a close call. Maybe that’s all there is, but I’ve had too many things in my life that have happened that make me think there is something else afterwards. That’s what I’m left with: there’s too much evidence afoot.”

Miss Patti has weathered a number of severe personal ‘storms’ in her life, including cancer, a heart attack and losing everything she owned to hurricane Katrina. “I shouldn’t have lived through that,” she says. “So now I tell myself, get over it, be grateful!”

As for the person who saved her life? McPhail and her patient have forged a special bond.

“Her brother came by to see me and tell me that she was stable,” McPhail says. “She was in the ICU, but she had a good prognosis since the cardiac arrest was most likely due to a severe potassium deficiency. So often in the hospital we never got to see patients once they transferred out of our units or went home. When she came in to meet me in September 2017, she was doing great. It was awesome to see that her life was saved and she was back to normal functioning!”

Fast forward to 2022, almost exactly five years after the incident, and Miss Patti showed up recently at the clinic for her COVID booster shot. “It was so great to see her again, and she is as sharp as ever,” McPhail reports. “It shows you what a difference CPR can make! She’s had five years added on to her life and is still going strong!”

That fact is thanks in large part to McPhail’s cool nerves and quick thinking, with an assist from medical technology and her training.

“Amber had never been able to meet people she had helped save,” Miss Patti says. “My brother found her, and I got to meet her. She’s great! It’s really something to be able to hug the person who literally saved your life because of her training and desire to do that. Now the people at OLLI laugh about it, saying they will use me as promotional material! I told them, just make sure you spell my name right!”