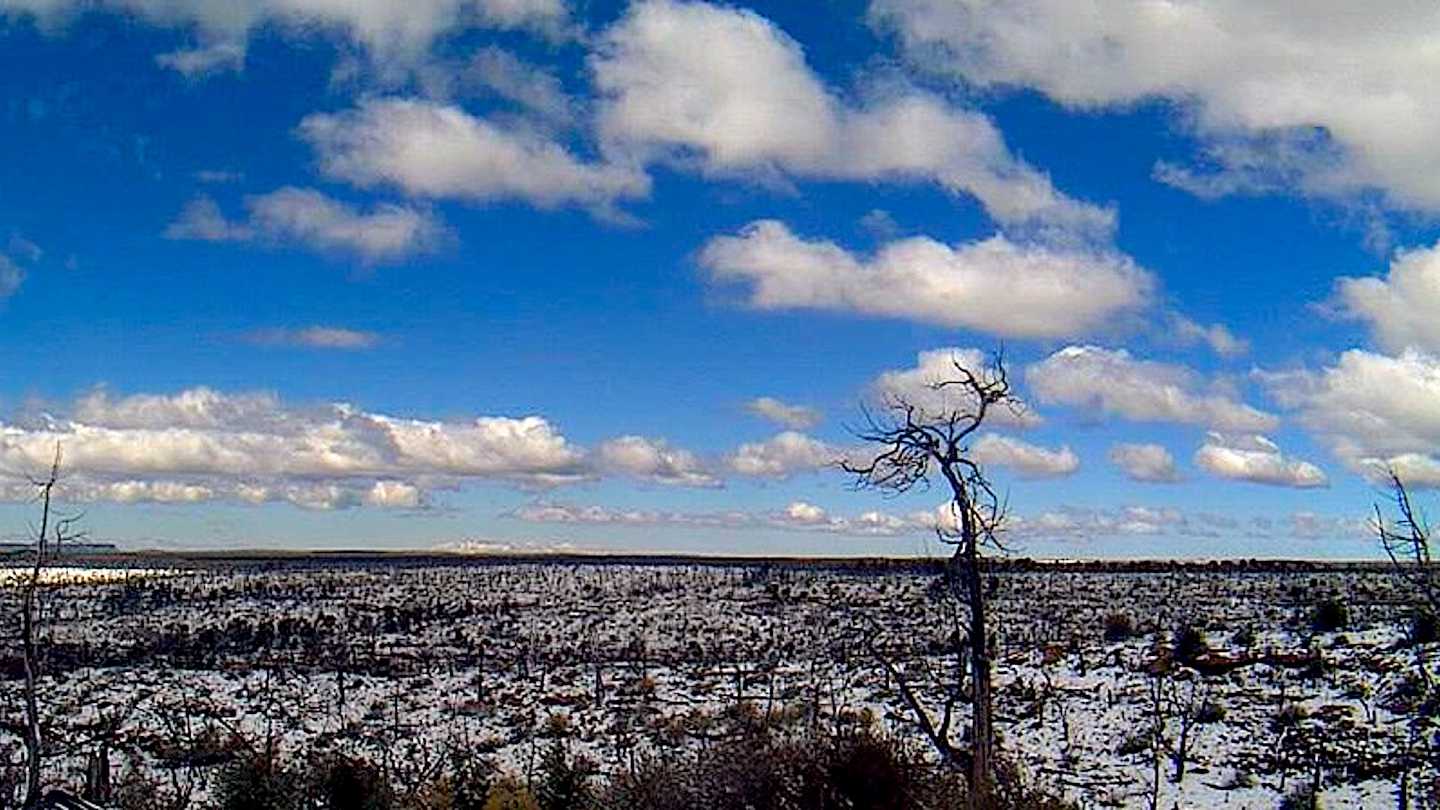 View to the southwest from a dust monitoring webcam in Mesa Verde National Park.

A University of Alabama in Huntsville (UAH) student says his examination of the combined influence of dust and smoke on surface atmosphere temperatures in sub-Saharan Africa likely applies to conditions in the American West, now in its worst drought in over 1,200 years.

In the West, dust and desertification likely form a positive feedback loop that leads to drying because of less variation between daytime and nighttime temperatures, says Christopher Phillips, a doctoral student in atmospheric science at UAH, a part of the University of Alabama System.

That’s what Phillips found happens with surface atmospheric temperatures in Africa, where the Sahara is growing in size.

“Smoke is a bit different, though. Smoke cools the daytime without warming the nighttime. This removes part of the feedback,” says Phillips, who is advised by associate professor of atmospheric science Dr. Udaysankar Nair. “We found that dust dominates over smoke in Africa, so I don’t think it would change the overall picture of surface warming.”

Smoke’s small dark carbon particles are very good at blocking sunlight, which scientists call shortwave radiation. Because they are less than two-tenths of a micron in size, the small particles don’t interact very much with what scientists call Earth’s longwave radiation, which is the planet’s reradiation of solar energy.

“So, when smoke is dense it cools down your daytimes a lot because it blocks sunlight, but it doesn’t change the nighttime energy budget because smoke aerosols don’t interact with the Earth’s longwave radiation emission,” Phillips says. 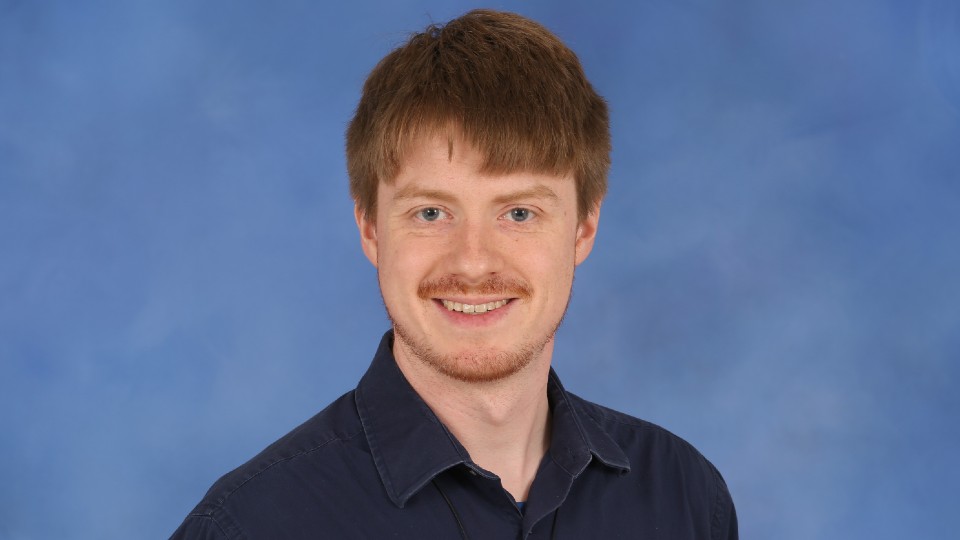 Christopher Phillips says that in the West, dust and desertification likely form a positive feedback loop that leads to drying because of less variation between daytime and nighttime temperatures.

While his work focuses on surface warming, Phillips also commented on implications of the results.

“Conceptually, both dust and smoke stabilize the atmosphere during the day, making it less likely for clouds to form,” he says. “Without clouds, you won’t find rain. Further, other studies show that African rainfall occurs in a seasonal cycle that is tied to the temperature of the Atlantic Ocean. When dust and smoke are blown over the ocean, they cool the water, which could make the seasonal rains less likely to form over sub-Saharan Africa.”

When dust warms the nighttime, the amount of dew that forms on plants can be reduced, stressing them more, Phillips says.

“If plants die off, then more dust can be lofted into the atmosphere, stabilizing the atmosphere and warming the night even more. This is the heart of the feedback loop,” he says.

Dust has much larger particles than smoke. They can be several microns in size and dust does block sunlight like smoke does, but it also absorbs a fraction of Earth’s thermal radiation.

“That absorbed fraction doesn’t go out to space but is instead radiated back towards the surface. Essentially, dust acts like a blanket insulating the ground at night.”

That’s similar to how the greenhouse gas CO2 behaves, and that was one of the motivations for Phillips’ research.

“In these arid, dusty places, how do we separate the impact of dust from greenhouse gas warming? We found that you can quantify how much nighttime warming is caused by dust, using weather models, but you have to look at combinations of smoke and dust,” Phillips says.

“That’s because too much smoke means that you cool your days without the blanket effect at night,” he says. “We found that when smoke is more than about half, the daytime cooling becomes greater than the nighttime warming.”

To study these effects in Africa, Phillips used a computer modeling approach with a single-column weather model that only looks at vertical processes like energy transfer in the atmosphere. He employed UAH’s Matrix high-performance computing cluster.

“It’s not quite a supercomputer like at the big national laboratories, but it is close,” Phillips says. “Overall, I think we had close to 5,000 simulations to analyze, which would not have been possible without some sort of high-performance computer.”

The model was developed by pairing weather balloon and aerosol measurements from the 2006 Dust Biomass-burning Experiment, which used aircraft to measure the vertical structure of dust-smoke plumes over Africa, and weather balloon data from two U.S. Department of Energy and NASA research sites in Niger.

“We found two broad processes that act to modify surface temperature. First is the radiative processes that we already talked about, where aerosols block sunlight but trap the Earth’s thermal radiation,” Phillips says.

“The second is tied to how aerosols stabilize the atmosphere. The air near the surface is known as the planetary boundary layer. It grows when heat at the surface creates turbulent eddies that mix the atmosphere, but adding dust and smoke keeps the boundary layer shallow. By trapping heat in a smaller layer, surface temperatures increase.”

Phillips found that this effect competes with shade created by dust and smoke and complicates how daytime temperatures respond to dust. At night, however, the radiative and boundary layer effects combine to cause warming.

“These two processes will be the same whether you’re here in the U.S. or in sub-Saharan Africa,” Phillips says.

While careful to note that the atmosphere is a very complex and constantly evolving system, Phillips says that continuing drought in the U.S. West creates many positive feedback loops that perpetuate it, like a decrease in plant cover that both decreases water vapor movement from ground to air and also increases atmospheric dust loads. Both effects can decrease rain chances.

“I would certainly expect extended drought to cause an expansion of the U.S. deserts, and maybe even transform semi-arid regions into arid ones,” he says.

On the plus side, Western agriculture tends to be well-irrigated, and Phillips says research shows that practice helps increase rainfall.

Large climate patterns will also help, he says. Cycles like el Nino and la Nina substantially change rainfall over the U.S., and they can overwhelm local factors like dust and smoke.

“Needless to say, nature is incredibly complex, and dust and smoke are only one piece of the puzzle,” Phillips says.

“That’s why it’s so important to keep pushing scientific progress and performing ever more comprehensive studies that look at each piece together,” he says. “I’m proud to say our paper is a step in that direction by tying together how aerosols impact both radiative transfer and boundary layer growth.”