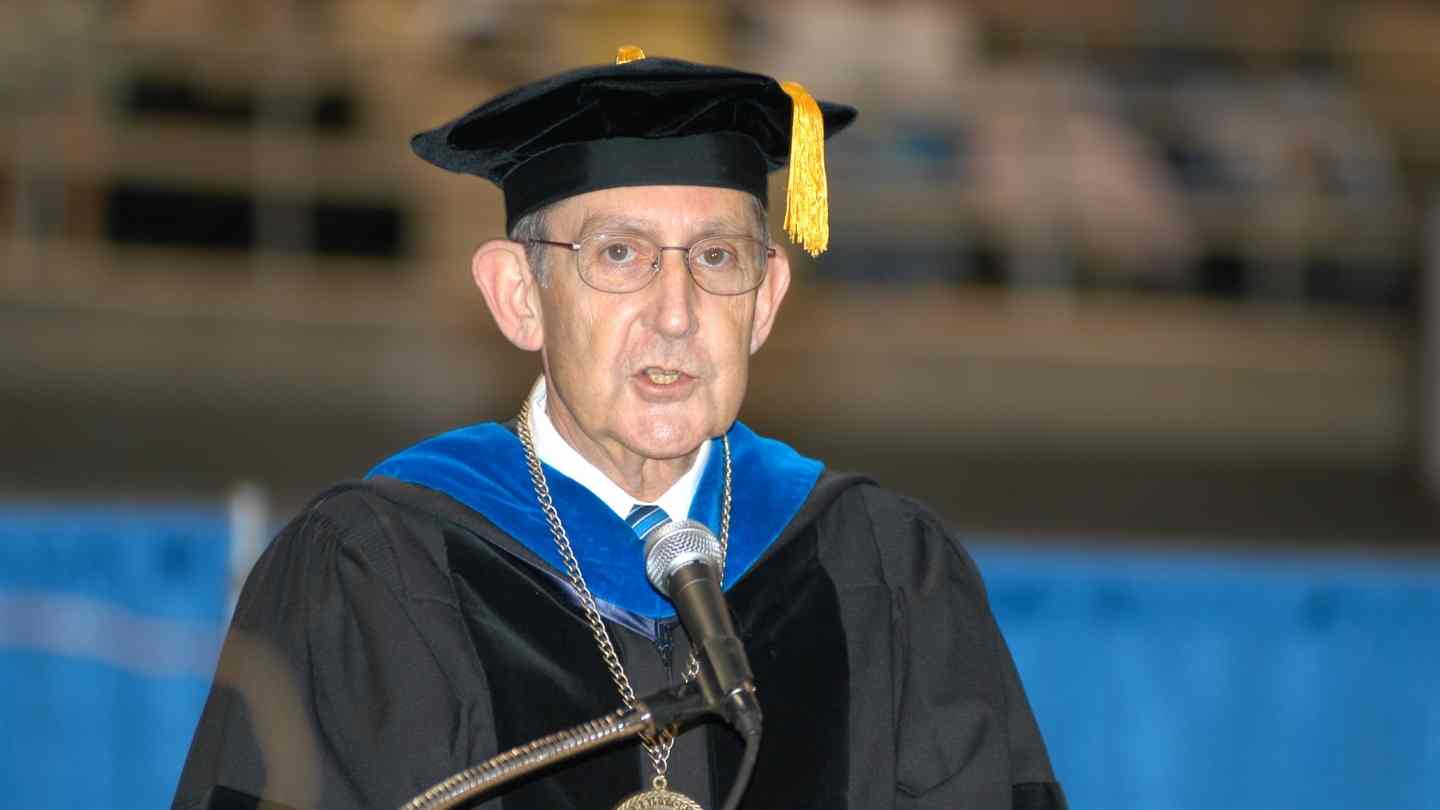 Dr. Frank Franz, the fifth and longest-serving president of UAH, died on Aug. 4.

Dr. Frank Franz, the fifth and longest-serving president of The University of Alabama in Huntsville (UAH), who instituted the creation of a campus strategic plan, oversaw the expansion of campus facilities and grew UAH’s research programs and academic prowess, died on Aug. 4 after a long illness.

Dr. Franz served UAH, a part of the University of Alabama System, for nearly 16 years after his appointment in 1991, taking over as campus president from interim president and Huntsville business leader Joseph Moquin. Dr. Franz retired on June 30, 2007.

“It has been a great privilege to work with the students, faculty, staff, administration and friends of UAH in building a fine institution that serves so well both the people of Alabama and our extended constituencies,” Dr. Franz said when he announced his retirement to the University of Alabama System Board of Trustees.

While he was president, Dr. Franz oversaw a university restructuring that strengthened core academic programs and changed the UAH academic calendar to a semester system. He led numerous construction projects on campus that followed the campus strategic plan he developed, and created a more pedestrian-friendly environment.

Under his leadership, two new residence halls on the north end of the campus added rooms to accommodate 547 students, and one was named for him. The campus added Olin B. King Technology Hall, Shelbie King Hall, an expansion to the library, an expansion of the university food service area and the University Fitness Center.

As Dr. Franz retired, construction of the 200,000-square-foot Shelby Center for Science and Technology was nearly complete and five fraternity and sorority houses were under construction. Construction had begun on a baseball, softball and soccer complex on campus, and planning was underway for the campus’ three-story intermodal parking facility.

As well, Dr. Franz implemented programs and policies to improve student recruitment, retention and success; improved the university's performance and stature in externally funded research; and improved the quality of academic life at UAH.

“He was a very good listener, and the students and faculty loved him,” said his wife Judy, a professor emeritus of physics at UAH and the former executive director of the American Physical Society in College Park, Md.

Dr. Franz served as chair of the Alabama Council of College and University Presidents from 1995-97.

“Frank was a great guy, and he and Judy were both just so great for the university,” said Dr. Ron Greenwood, who was UAH’s vice president for research from 1998-2008 and was a professor of business.

“Frank had a unique style of leadership and I think that really served him well in the transition,” Dr. Greenwood said. “In every situation, he did not want a loser. He wanted everyone to be a winner, and at a university that’s very important. He could solve a problem and nobody felt that they had lost.”

Dr. Franz had a strong vision of UAH being the very best academically that it could and also being a strong research institution, Dr. Greenwood said.

“I think what Frank recognized in coming here was that he wanted the university to be more conventional. He wanted to provide the students with a traditional academic experience. So, there would be dormitories, places to socialize, and it would become a destination. He was trying to create a student experience that was closer to what a traditional university would be like.”

“He worked to create a very large research program,” Dr. Greenwood said. “The thing that he did to support us in establishing that, and something that was a real boon to the campus, was establishing the National Space Science Technology Center.”

Located on the UAH campus, the center blends NASA, National Weather Service and other government researchers with academics and students in a unique way.

“He was very supportive of that and it was a very different relationship between the government and the university, and a very positive model,” Dr. Greenwood said.

A native of Philadelphia, Dr. Franz was a researcher in experimental atomic physics who also held the rank of professor of physics at UAH.

Prior to being appointed UAH president, Dr. Franz served as provost and vice president for Academic Affairs and Research at West Virginia University in Morgantown from 1985-91. From 1967-85 he was at Indiana University in Bloomington, first as a professor of physics and then as associate dean of the College of Arts and Sciences. He was appointed dean of the faculties in 1977.

Dr. Franz received a bachelor’s degree in physics from Lafayette College in Easton, Penn., then completed master's and doctor's degrees in physics at the University of Illinois. He received fellowships from the American Physical Society and the Alfred P. Sloan Foundation, and was a postdoctoral fellow of the National Science Foundation and the Swiss Federal Institute of Technology in Zurich, Switzerland.

He is survived by his wife and son Eric, who is an attorney in Atlanta.