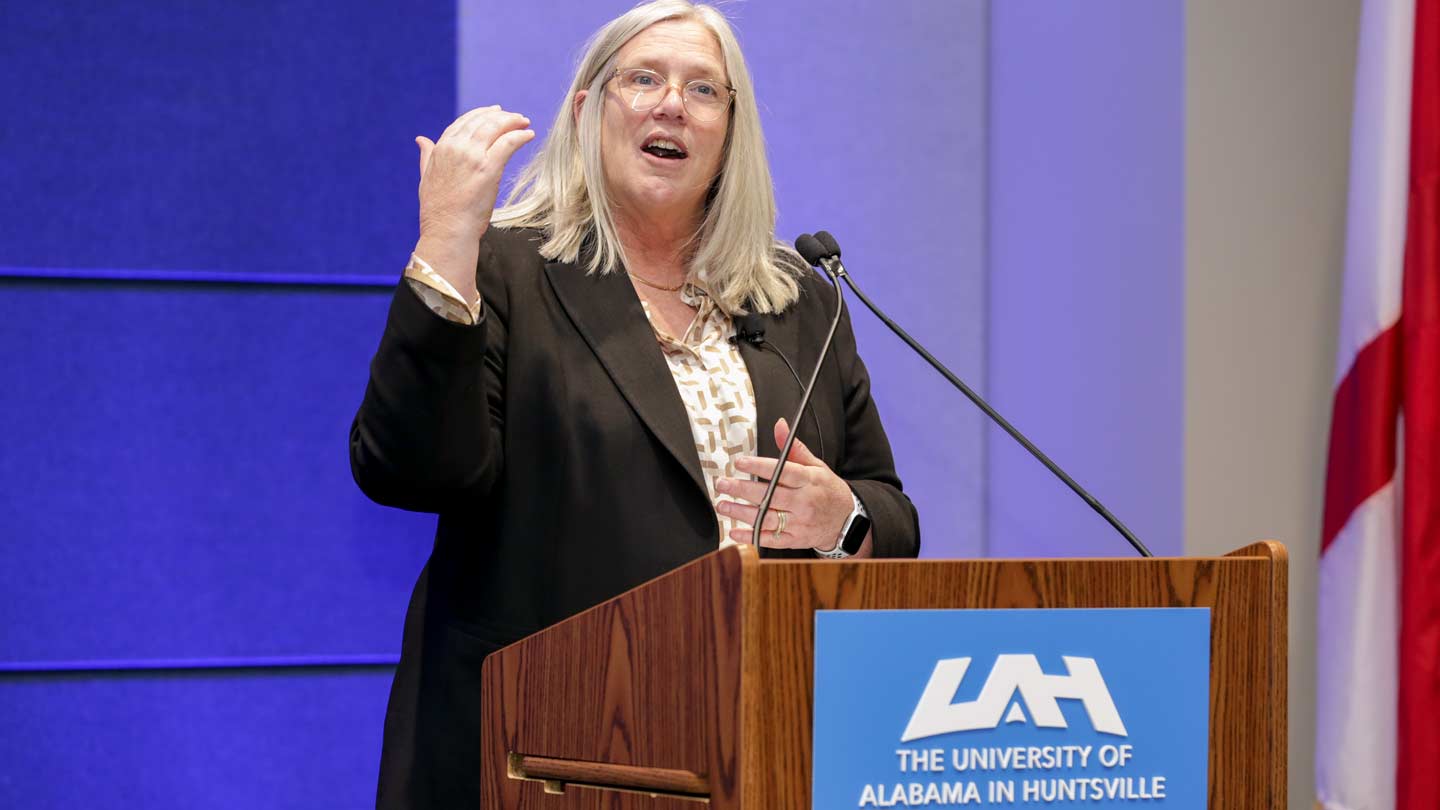 The world has evolved from power projected by nation-states to power projected in cyberspace, and low barriers to digital entry require national intelligence and national security communities to embrace uncertainty in decision-making.

"The world is changing, and this change is big," Gordon said. "We’re going to have to create anew. This point goes undiscussed in a time of hyper-partisanship and hyperbole."

National security requires new models for government in a digital world, she said.

"The conflict we are having between our physical world and the digital world is really starting to show how we need to understand this."

As PDDNI, Gordon co-led the Office of the Director of National Intelligence and oversaw the entire intelligence community, comprised of more than a dozen agencies that collect information on threats against the United States.

She spoke at UAH as part of the university’s Distinguished Lecture Series. The series brings nationally recognized guest speakers to Huntsville to enhance community collaboration and assist the development of Redstone Arsenal. It fosters better understanding of current events and future trends, how they impact the federal organizations at Redstone and how they could influence U.S. reaction to world events and the nation’s future exploration, discovery and technological development.

With more than three decades of service, Gordon led at every level of the intelligence community with roles spanning numerous organizations and disciplines. Prior to assuming the role of PDDNI, Gordon served as the deputy director of the National Geospatial-Intelligence Agency (NGA) from 2015 to 2017. Before her NGA assignment, she served 27 years at the Central Intelligence Agency and was involved in some of the most monumental operations in U.S. history, including the raid on Osama Bin Laden. During her tenure, she rose to senior executive positions in each of the agency’s four directorates: operations, analysis, science and technology, and support.

Gordon said America is faced with a moment of global strategic uncertainty and that the country needs a new framework for national security that’s more reliant on new sources of intelligence including big data and public sources of information.

All of that is happening as nation-centered power is on the wane, she said.

"Now cyber is just the way that every aspect of national security is conducted," said Gordon. "Cyber and space are the way national interests will be affected."

Since the fall of the Berlin Wall, the rise of non-state actors and individual threats against all levels of U.S. government have placed new demands on the intelligence community, she said.

"Now we’re in an era where threats are through information," Gordon said. "There is greater adversary access to data."

That allows bad actors to create chaos on the battlefield and ubiquitous technology is their toolbox, according to Gordon.

"Every technology is available to everyone and the first to get it benefits by exploiting it," she said. "We are nearly perfectly digitally connected. It has changed our adversaries’ operations and goals."

In the new world of no borders, theft of private sector information and intellectual property has been weaponized and that requires a different kind of national security approach, she said.

Traditional U.S. intelligence approaches are adapting as the intelligence community struggles with how to incorporate big data and uncurated public data into its information mix.

"We in the intelligence community don’t want to be wrong in our assessments and so we tend to deal with just the data that’s in front of us," Gordon said.

"Once you build a model that’s like a model you used to use, then it’s ineffective because that’s a model based in the past."

With today’s challenges, the intelligence community can’t rely on information gathering techniques of the past, she said. It must make greater use of unclassified information in the mix, make decisions much faster and be open and flexible in attitudes toward the future.

"We’re decision averse," she said. "We’re going to have to get over that."

The national security apparatus of the future will need integration of information systems to get the data it needs where it is needed, Gordon said, and that means that the intelligence community needs to know how to use artificial intelligence and machines as information partners.

Making that evolution will require the community to track and maintain the required talent pool, she said, and it will demand that universities supply students eager to take up the necessary tasks.

"We need innovation in the tradecraft of people who are producing the things that are outside of the system that we are currently operating in," Gordon said.

A public-private partnership will be necessary to deal with a world of shifting threats and "pesky sovereignty," according to Gordon. In a democratic society that effort will need to be more transparent.

"We need to trust our decision-makers," Gordon said. "If there are two things that we have to invest in most as a free and open society, they are trust and truth."

Artificial intelligence can help determine what’s true, and national security demands that data collection is designed to fit the end use rather than broadly collected, she said.

"We are spending lots and lots of money on lots of things that are all good but none of them is having much effect," Gordon said.

"I think our adversaries and competitors can’t decide where the lines are anymore so they are vibrating," Gordon said.

She used Iran’s response to the killing of Gen. Qasem Soleimani as an example of a nation "underreacting" to an event because frameworks nations used in the past to relate to each other are in flux.

U.S. national security requires that the public-private partnership underpinning it adapt and respond to that flux.

"I’m hopeful," Gordon said, "because we’ve got the right system and it allows free and open competition and improvement."