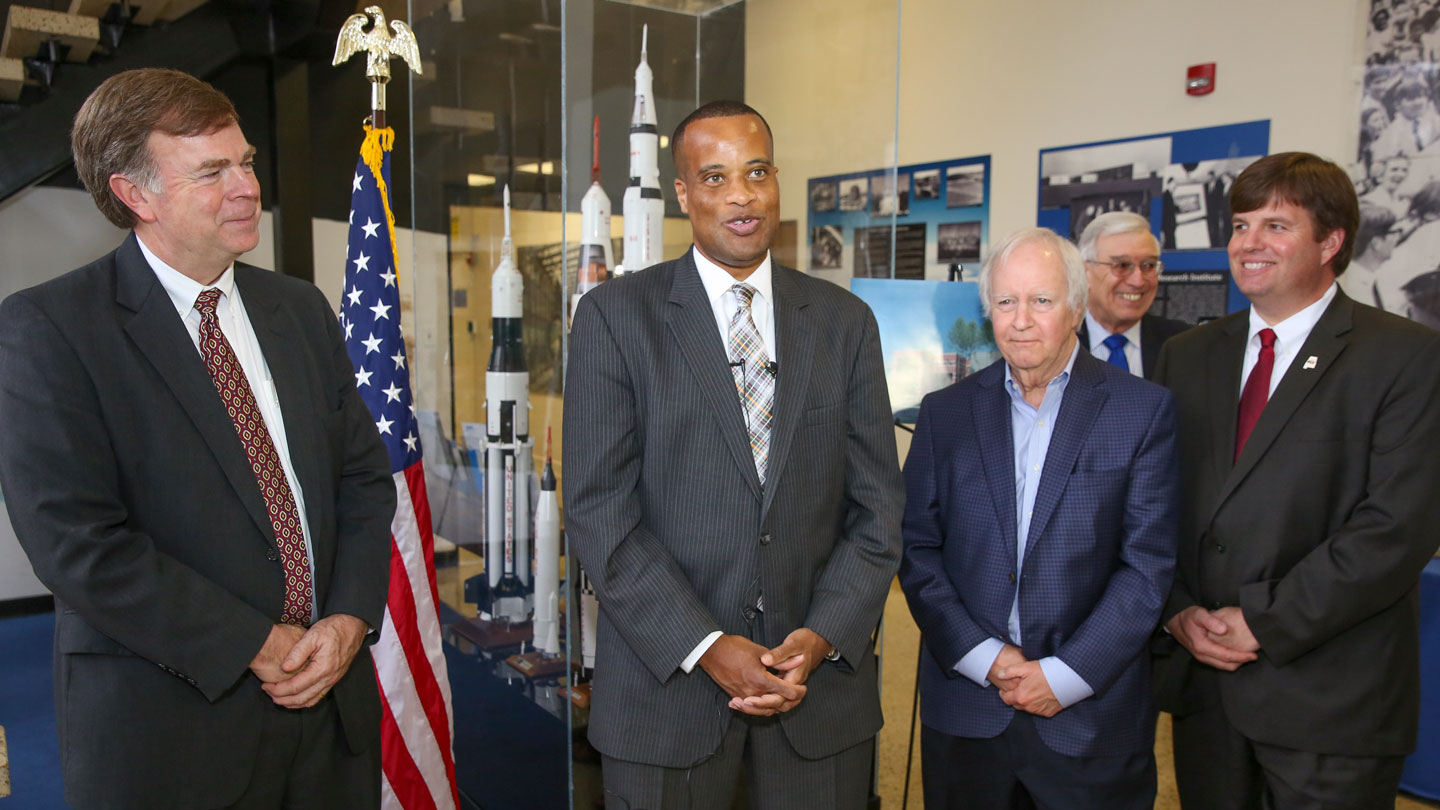 Officials at The University of Alabama in Huntsville (UAH) joined with Huntsville Mayor Tommy Battle and Madison County Commission Chairman Dale Strong on Monday to brief U.S. Dept. of Commerce Assistant Secretary for Economic Development Jay Williams about progress on a coming technology business incubator at the university.

The $9 million Innovation to Invention Center (I2C) was recently provided an organizational jump-start by a $500,000 grant from an Obama Administration program at the U.S. Dept. of Commerce Economic Development Administration (EDA). The grant will allow the I2C to hire personnel and put in place policies and procedures for its operation in advance of construction of its facility.

"It was a competitive application and ultimately it caused us to look beyond what we normally would have funded," Williams said. "As we go on now to other communities, we can use this as an example and sort of push them in this direction."

In addition, EDA earlier invested a separate, $3 million grant in the I2C building. Construction of the facility, which will house up to 40 startup businesses and provide them with office and laboratory space, is expected to begin in about a year, UAH Architect Larrell Hughes said. The 45,000-square-foot building should be completed in an additional two years, he said.

"To the extent that there are a whole host of entrepreneurs here who are interested in bringing these technologies forward, this is an important project," Williams said.

Meanwhile, UAH will use the EDA investment in the university's Virtual Proof of Concept Center (POCC): The Growth & Acceleration of Products (GAP) Project to begin creating the functions that will be housed in the I2C.

"There's a tremendous amount of growth and energy involved here," Williams said. "It's not until you come to talk to the stakeholders that you fully appreciate the impact of the programs. This is the appropriate role of the federal government, to make these investments, in our estimation and in the president's estimation."

The incubator will utilize university resources at UAH to bring "shelved" technologies into the marketplace through identification and funding of entrepreneurs in a 15-county region and at UAH, and will provide a range of services to convert ideas, research and prototypes into viable commercial products. Startup companies that result will reside at the incubator for about three to five years before launching on their own.

"Redstone Arsenal submits and is awarded more patents than any other entity in the Southeastern United States," Dr. Altenkirch said. "This incubator is going to have many more companies coming into it from the outside than it will have from the university."

The end result is expected to be a company and jobs creation engine that can power economic diversity and opportunity in the region.

"We want to take the applied sciences and the patents we have, and the patents at Cummings Research Park and out on Redstone Arsenal and at NASA, and take those technologies to use them to start brand-new companies," said Dr. Vaughn. "And really, when it comes to science and engineering, our community right now doesn't have an incubator for those."

Dr. Suzy Young said the completed I2C facility will also include room for anchor tenants, and noted that it will be designed to facilitate interplay between campus academics and researchers and business executives to "mine" so-called throwaway technologies that have been discovered yet shelved. These technologies will be assessed and then developed to be commercially viable through startup companies.

"A lot of that investment is just sitting there, and if it could be commercialized, it would have a huge impact on new business development in the region," Dr. Young said.

Williams was briefed on UAH, university research, the UAH Office of Technology Commercialization, the relationship the university has with Redstone Arsenal and NASA and the I2C project by a team of university officials.