HUNTSVILLE, Ala. (June 26, 2013) - When Gloria Adhami started taking group fitness classes at the University Fitness Center (UFC), her only goal was to stay in shape. But little did The University of Alabama in Huntsville (UAH) student know that, a couple of years later, she would end up teaching that very same class.

"One day I was taking BODYATTACK™ and after class the instructor came up to me and asked if I'd be interested in teaching," says Adhami, who was just 18 years old at the time. "I was like, Sure! Why not?"

And then she found out. "You do the training and you're like, Oh my gosh! This is incredibly hard and time-consuming!" she says with a laugh. But in April of 2010, she earned her certification, first in BODYATTACK, then in StepJam, and then in BODYPOWER. Now, she teaches all three.

Of course, that's not the normal route to becoming an instructor, says Laurie Griffin, director of group fitness and facility programming at the UFC. It's not even one that she would necessarily recommend for someone as young as Adhami was when she began. 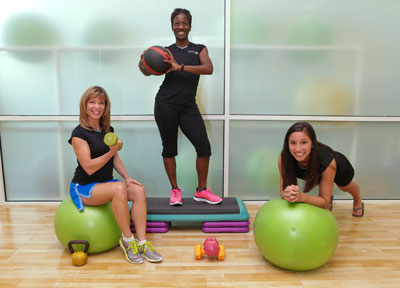 "Gloria was a really great participant, but it takes a lot of confidence to stand up in front of people," she says. Especially in front of people who may be a lot older, as many of UAH's non-traditional students often are.

"People can project on you if they've had a bad day, even though they don't mean it that way," says Griffin. "And you have to be careful about what you say because they're dealing with their own issues."

Griffin experienced that first-hand when she started teaching group fitness classes some twenty years ago. "I was the young girl once where everyone thought my life was perfect. Then I got older and got some credibility," she says with a laugh. "And now I'm like their mom!"

Indeed, Adhami says she has experienced the occasional negative comment. "Sometimes I feel like people are thinking, 'She's younger than me. What does she know?'" she says. "But I just don't really think about it. Mostly the members here just really want to work hard in every single class."

If I have a bad day and I get
to come and teach, it’s automatically a good day.

That's because fitness goes much deeper than just exercise. "If it was just exercise, we would all be size zero," she says with a laugh. But instead, it's supremely personal. So personal, in fact, that Edwards has had people fall into her arms crying at the end of class.

"We can be as close to them as their therapist, because when people take your class, they think they know you," she says. "And when people allow you into that space, you have to take that personally too."

Edwards knows more about that, perhaps, than the average instructor. A therapist by training, with two degrees to her name, she says she began her counseling career "overweight, depressed, and miserable." And she ended it by getting fired.

"It wasn't my fault but I didn't fight it and I was glad," she says. "The best thing that ever happened to me was getting fired." Because that ultimately led her to Huntsville, and shortly thereafter, her first group fitness teaching certification. It changed her life.

"Counseling was hard for me. I believe I went into it to hide from my own issues," she says. "But teaching group fitness allows me to feed into people and myself, and it's healthy for me not just physically but emotionally. It's really an honor."

It's precisely this kind of attitude that Griffin looks for when she recruits instructors. And why she can say, with pride, that the level of instruction at the UFC is the best she has seen. "The only people who work here are people who are really good," she says.

And that doesn't go unnoticed, she continues. She's had a number of people approach her with outright shock at the quality. "They say, 'Who'd have thought I'd get such a good class in Huntsville, Alabama?'" she says with a laugh.

Good instructors aren't the only reason the UFC is so popular, however. "Being part of a university, it's a one-stop shop," says Edwards. "It draws in college students and their friends, their parents who might not otherwise come in, seniors who want to use the pool, and kids who participate in the UFC's youth programs."

The center also speaks to a larger cultural movement toward fitness in general. "I've seen a lot of students come through those doors that were not in shape," she says, "and now they're in great shape."

That's important, adds Edwards, because "unhealthy college students miss classes, and when you miss classes, you drop classes." So keeping them fit and moving and healthy, she says, "motivates them to get on with their lives" and stay in school.

As for those people who have yet to visit the UFC? Edwards says to just give it a try. "Take a step through the doors," she says. "You can't experience it by hearing about it. You have to experience it for yourself."

And don't be intimidated, either. "Even though people perceive this gym as one way from the outside, inside there is every type of body, every type of person, every type of background," she says. "You could have a sixty year old and a college student in the same class. But everybody can do something."

Griffin agrees. "This is the one place where you can come where you're sure to find someone like you - young, old, women, men. You can find someone you identify with," she says, "and that should make you feel at home."

That applies to the instructors as well, says Edwards. "We're accessible. We're not so far gone that we're above anyone we teach," she says. "We have goals too." Indeed, several of the instructors have full-time non-fitness jobs, including nurses and doctors.

Or, as in Adhami's case, being a student. But even when she graduates in December and leaves for occupational therapy school, she says, she will keep teaching. "I really like it. It's a good stress reliever," she says. "If I have a bad day and I get to come and teach, it's automatically a good day."

Inevitably, she'll probably still be the youngster of the group. But as always, she won't let it faze her. And certainly not if she continues to follow her colleague Edwards' sage advice: "Work hard in silence and let your success make the noise."