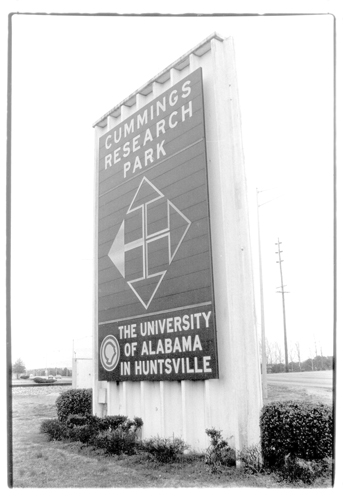 HUNTSVILLE, Ala. — Envision rolling hills, picturesque pastures with row crops dotting the landscape in an area that makes up the western boundary of Huntsville in the late 1950s. Today, in that same location, what you find is a collection of buildings and a network of roads that connect 285 companies and 25,000 employees. That is the transformation that has taken place since the creation of Cummings Research Park five decades ago.

Cummings is now the second largest research and technology park in the United States, and fourth largest in the world. The internationally recognized research park is home to some of the most prominent high-tech businesses in the world, including 20 Fortune 500 companies as well as numerous local companies. The Association of University Research Parks recognized Cummings as the Most Outstanding Research Park in the world in 1997.

Companies located in Cummings Research Park have been involved in many of the world’s most far-reaching technology developments during the past 50 years, and the trend continues today. The diversity of businesses includes software design, aerospace and defense, engineering services, computers and electronics, research and development and biotechnology.

UAHuntsville and its nonprofit foundation, the UAH Foundation, were instrumental in the establishment and nurturing of Cummings Research Park, and continue to play a major role today through enhancing and promoting the site, and providing the intellectual capital for future development.

It’s a partnership that some said was overly aggressive when the park was developed a half century ago. It’s also one that most people today concede as being the driving force behind Huntsville’s growth and success as a community.

“Cummings Research Park has had a profound effect on our community,” said Ray Jones, the former longtime chairman of the UAH Foundation. “It’s impossible to know for sure what Huntsville would be today without it, but it would be easy to speculate.”

Jones points out that nearby Decatur “was much more advanced than we were at the time.” Based on 1950 population data, Huntsville was the 13th largest city in Alabama with a population of about 16,000. Today, the Huntsville metropolitan area is the state’s second largest with 417,593 residents.

The area literally began to take off as Huntsville became an important link to America’s space program through NASA’s presence. The U.S. Army brought Wernher von Braun and his team of rocket scientists to Huntsville to develop a national missile defense, and then later in efforts to help America win the space race with the Russians and land the first human on the moon.

As part of enhancing the area, Dr. von Braun encouraged local leaders to abandon the recruitment of smokestack manufacturing industries and focus more on high-tech industries. It turned out to be an approach that forever changed Huntsville. UAH and the university’s foundation continue to be a critical part of that process.

Milton Cummings, president of Brown Engineering at the time, had earlier suggested that Huntsville create and develop an industrial park. Dr. von Braun, as director of the Marshall Space Flight Center, told local leaders they would be wise to establish a zoning district in the park to restrict development to R&D enterprises.

The strategy led to the creation of the UAH Foundation, a needed entity to provide credibility and the all-important nonprofit status. Without the non-profit status for the organization that would oversee park operations, Dr. von Braun said the park would likely fail because potential investors would assume founders would be more interested in making money for themselves instead of establishing a park to serve the long term good of the city.

The UAH Foundation was born from that belief. The foundation was charged with developing the property and marketing it to potential economic development interests.

“It began as a group of businessmen who took the lead on developing the park,” said Mike Ward, who is vice president of governmental relations for the Chamber of Commerce of Huntsville/Madison County. Ward has written a book outlining how the UAH Foundation helped shape Huntsville’s history.

“Milton Cummings planted the idea, but this group of local leaders ran with the original idea,” Ward said. “They saw something with much bigger potential. They convinced a lot of people, after the foundation was created, to donate property, buildings and other assets to the foundation. In return, they got a tax write off. They also purchased other property that was auctioned. By having control of the property and developing the park, they could market and sell it.”

Cummings Research Park was established in 1962, known then as Huntsville Research Park. It was renamed after Cummings shortly after his death in 1973.

“The foundation was started to support the vision von Braun brought and was embraced by the community,” Jones said. “We did all we could to complement that vision, but it was successful because everyone was working for one theme.”

The board also followed Dr. von Braun’s lead and supported the move to create the new zoning ordinance that prohibited heavy industry from locating in the park. City leaders later declared more than 3,000 acres at the Cummings property as a "research park district."

There are 3,843 acres in the park today, with UAHuntsville campus situated as the anchor tenant.

Another key component of UAH taking an active role in the effort was the need for the foundation to be affiliated with the university in order to qualify for nonprofit status. Although the foundation remains a separate entity, the affiliation has attracted professors and students who have excelled in researching and developing technological advances in a variety of fields.

It is this partnership that has led to many successful pursuits, said current UAH Foundation Chairman Dag Rowe.

“In an environment where most university foundations function as ‘hat-in-hand’ solicitors and passive managers of alumni donations, the UAH Foundation, through creative initiatives, partnerships, and investments, has nurtured this research venue, which is second to none as both an economic engine, and as an incubator for pioneering research and breakthrough technologies,” Rowe said. “The resulting synergies with the exceptional research and teaching at UAH cannot be overestimated.”

This successful model was the type of partnership envisioned by Dr. von Braun when he addressed the Alabama Legislature in 1961 in an attempt to get financial assistance from the state in building the research institute at UAH, which would make the Huntsville campus unique from other campuses in the University of Alabama System.

“It’s the university climate that brings the business,” Dr. von Braun told the legislators. “Let’s be honest with ourselves. It’s not water, or real estate, or labor or cheap taxes that bring industry to a state or city. It’s brainpower.”

UAHuntsville began in the 1950s as an extension center for the University of Alabama, and the Research Institute initially functioned separately from the university. However, they were merged into one institution in the mid-1960s and the campus began offering degrees before the turn of the decade.

“When the research park began, it made it logical for the research institute and university to be one,” Ward said. “The course offerings at UAH were geared toward research that supported activities we had here – NASA, the Army and others.”

Local officials said companies have come to Cummings Research Park, in part, because of the university and its ability to research, develop and solve problems.

Jones added it was the intent of those leaders to make the university as technically oriented as possible. “UAH was the goo in the glue that held the hi-tech community together. If we didn’t have the university, it would have been hard to do what we’ve done here,” he said.