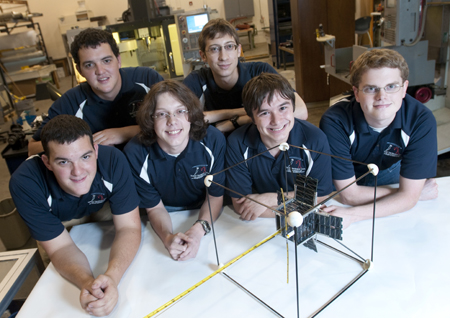 HUNTSVILLE, Ala. — Next week, seven students from The University of Alabama in Huntsville will fly to NASA’s Johnson Space Center in Houston to test their miniature satellite in a microgravity environment. But that flight will be tame compared to what they will experience as they find out how strong their stomachs are on multiple flights aboard NASA’s “Vomit Comet.”

The modified Boeing 727-200 will carry the Space Hardware Club members on multiple microgravity flights in order to test the club’s first “cubesat,” designated ChargerSat1. The small cubic satellite measures only about 10 centimeters on each side and weighs 950 grams, just over two pounds. At that weight, the cubesat falls into the “picosat” category – nanosatellites that weigh more than 100 grams but less than 1,000 grams. “If we keep it under 1,000 grams this becomes the first picosat to successfully deploy a gravity gradient boom,” said team member Matt Rodencal.

NASA set up the Cubesat Launch Initiative in 2009 to provide research opportunities for small satellites to piggyback on planned launches as auxiliary payloads. Experiments are geared to explore areas of science, technology development, exploration, education or spaceflight operations.  This past February, UAH’s cubesat experiment was selected as part of a “third batch” of 33 nanosatellites to fly in 2013 or 2014. The parabolic flight segments that induce short periods of weightlessness approximate the microgravity environment of space, which they need to test the deployment of several antennas, solar panels, and a gravity gradient boom from the tiny satellite. Following several flights to get the seven-man team acclimated to weightlessness, four flights will be used to test five different parameters of cubesat performance. Often, those parabolic flights can upset the stomachs of those making the flight.

Space Hardware Club members making the trip to Houston will be brothers Eric and Mark Becnel, Matt Rodencal, Mason Manning, Phil Pemberton, Dean Gilmore and Justin Riegel.  The trip is underwritten by NASA with some funding from the Alabama Space Grant Consortium and UAH. True to the best traditions of NASA, the microgravity experiments are designed to test and verify in-flight performance. Club vice president Marc Becnel said the flights will show if the cubesat performs in zero gravity in the same manner as a computer simulation predicted.  The team feels this is the best way to test the cubesat in a microgravity environment prior to launch. “There are other ways to test microgravity. We could drop the satellite from a large tower where the satellite lands on a large cushion, but that’s not ideal for us because we have such a fragile satellite,” Rodencal explained.

Becnel said the cubesat, which resembles a large, metallic Rubic’s cube, has been shipped to Houston, and is virtually identical to the one they have planned to fly in orbit. The first flight will test orientation of the satellite, which Rodencal said is one of the most important parameters. If a reaction control wheel fails to properly orient the satellite in its simulated orbit, the team can deploy a gravity gradient stabilization boom to restore proper orientation. “We need to see how the boom changes the satellite’s orientation. It may cause the satellite to roll, in which case we’ll need to deploy the reaction control wheel to correct that,” said Becnel.

The next flights will allow testing of the cubesat’s communication properties with the deployment of dipole and monopole antennas designed to allow the satellite to communicate with Earth.  “At the end of the day, the cubesat is a small but sophisticated communications device,” Rodencal said. “We have to show we can get enough power to transmit at a reasonable power output, but we can’t waste our power transmitting into space.” In actual orbit, Rodencal said the dipole with its omni-directional pattern would be deployed first to provide instant communications. “It gives us communications right then and there.” Following that deployment, the monopole would be deployed which enhances communications by more tightly concentrating RF signals back to Earth receivers.

One of the flights would test the deployment of more than 100 tiny solar panels, each about the size of a thumbnail, used to convert sunlight into electric power. Rodencal explained that in this case, size does not matter. “At about 27 percent efficiency, these arrays are much more efficient than solar panels used on Earth, which are only about 15 percent effective,” said Rodencal.  ChargerSat1 team lead Eric Becnel said the experiment contains what he described as “novel activities” not common to any previous experiments from a mechanical perspective. “It will be interesting to see if everything works properly.  It will be something unlike what has ever been done before,” he said. Justin Riegel, team test manager, said that while mechanical glitches can occur, many hours of in-lab testing already performed makes that unlikely. “Everything has to be so rigorously tested, there is very little that could go wrong on these tests. The failure we are most likely to see, which is still incredibly unlikely, is that something doesn't deploy. We have several measures in place to prevent this.”

One of those glitches could be the simple failure of a monofilament line that prevents deployment to completely sever. In that event, the Command and Control station could adjust the duration of a “hotwire burn” that would cut through the monofilament and complete the deployment. Besides that, he said, only minor risks exist.  ChargerSat1 will be protected on the aircraft by a tough, lightweight carbon fiber frame that should prevent any damage to the cubesat.

The UAH Space Hardware Club team knows a lot is riding on the outcome of the microgravity tests. Mason Manning sums up team attitudes. “This will allow us to further improve our design, if need be, which will ultimately decrease the possibility of something going wrong once in orbit.”