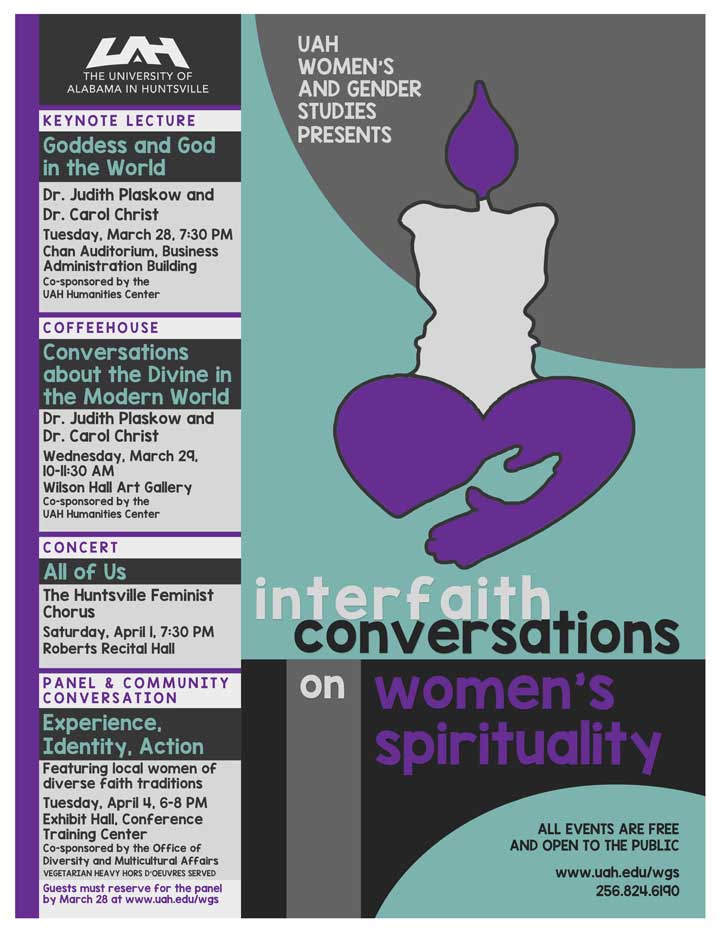 The University of Alabama in Huntsville's (UAH) Women’s and Gender Studies Program is sponsoring a new series this spring, “Interfaith Conversations on Women’s Spirituality."

The series showcases women’s voices, honor the role spirituality plays in women’s lives, contemplate the complexity of women’s experiences of spirituality, and celebrate the religious diversity of Huntsville and North Alabama. All events are free and open to the public, but reservations are required for the “Interfaith Panel and Community Conversation.” The event is co-sponsored by the UAH Humanities Center and the Office of Diversity and Multicultural Affairs.

While on campus, Dr. Judith Plaskow and Dr. Carol Christ will visit several classes. The two scholars will give a keynote lecture, “Goddess and God in the World: Conversations on Women’s Spirituality,” on Tuesday, March 28, at 7:30 p.m., in Chan Auditorium located in the College of Business Administration.

On Wednesday, March 29, from 10 a.m. to 11:30 a.m., in the Wilson Hall Art Gallery, Plaskow and Christ will also hold a Coffeehouse event, “Conversations about the Divine in the Modern World.” This event will provide an opportunity for informal interaction and conversation with the UAH community.

Plaskow and Christ are leading theologians in feminist spirituality and particularly examine the continuities between their own very different faith traditions: Plaskow’s Judaism and Christ’s goddess-centered spiritual practice. They have recently co-written their third book together, Goddess and God in the World: Conversations in Embodied Theology (2016), from which their UAH lectures will be drawn. Plaskow is Professor Emerita of Religious Studies, Manhattan College, and Christ was a tenured full professor at San Jose State University, before moving to Greece to direct the Ariadne Institute for the Study of Myth and Ritual. Plaskow and Christ met and began their scholarly collaborations as Ph.D. students at Yale University in the 1970s.

The Huntsville Feminist Chorus annual spring concert also explores women’s spirituality. The concert, titled “All of Us,” will be on Saturday, April 1, at 7:30 p.m. in Roberts Recital Hall.

The women’s spirituality series concludes with an Interfaith Panel and Community Conversation. This event, which will focus on “Experience, Identity, and Action” in women’s spirituality, will be on Tuesday, April 4, from 6 p.m. to 8 p.m., in the UAH Conference Training Center Exhibit Hall (formerly the University Center).

The panel will feature local women of diverse faith traditions sharing their experiences of how their spirituality shapes their lives. The event includes heavy hors d’oeuvres (vegetarian). This event is free and open to the public, but reservations are required by Tuesday, March 28. RSVP at www.uah.edu/wgs.