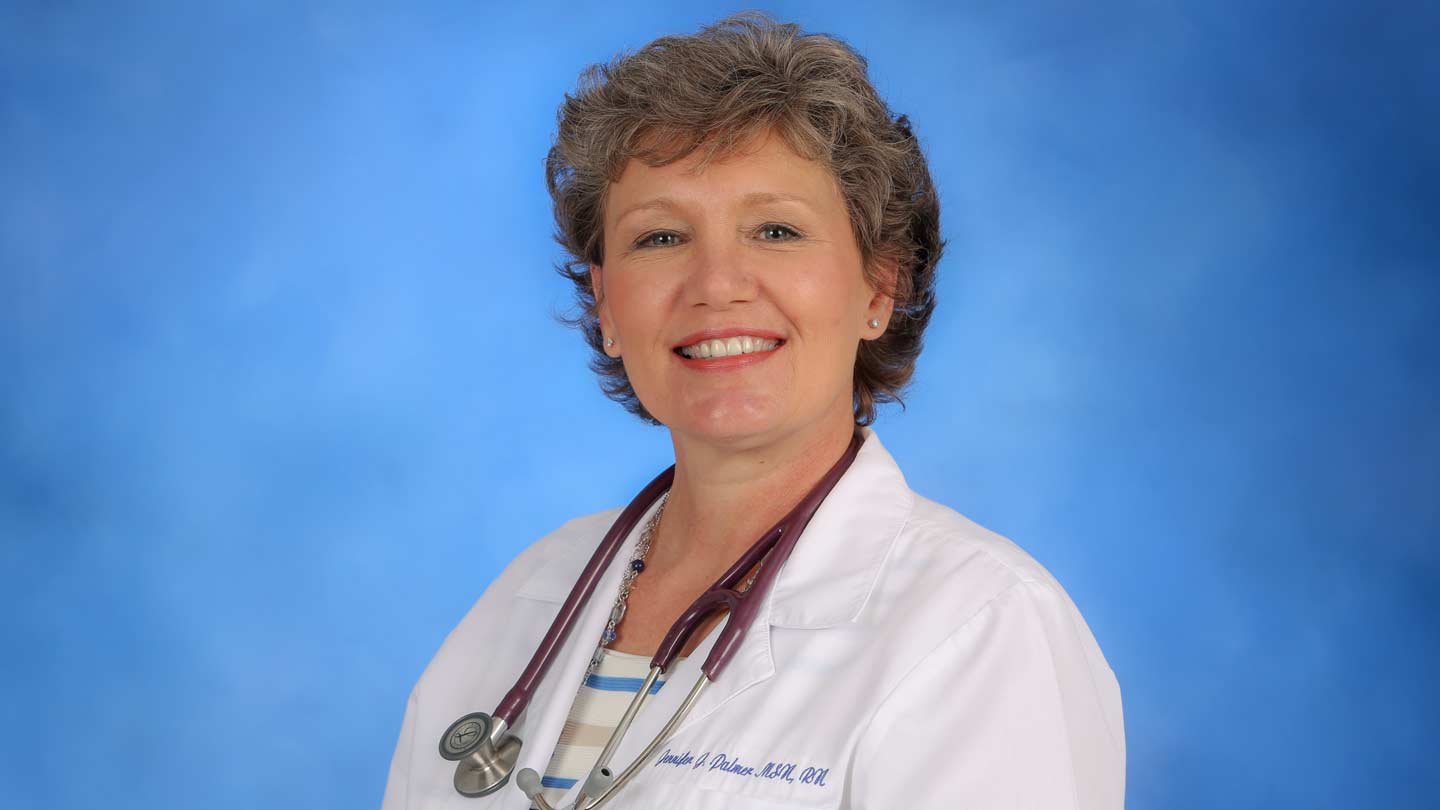 Jennifer Palmer fondly remembers as a young girl, how she aspired to "fix" whatever was ailing her family's animals. Then, her dream was to become a veterinarian. Now, a Clinical Instructor of Nursing at The University of Alabama in Huntsville (UAH) College of Nursing, she knows firsthand that the synthesis of animal science and nursing is not a vast cavernous hole.

"For anyone who has worked with animals, you know they cannot explain what their condition is, or where they are hurting. Their ailments are a mystery, waiting to be solved. It was the same with many of my patients. Some could explain where they were hurting, but didn't know why. Others, because of some ailment, could not explain what was wrong, but you could see in their eyes…that something was wrong. I feel the pursuit of my first degree in animal science has made me a more caring and compassionate nurse," said Palmer.

A native of Pontotoc, MS, Palmer's original goal was to attend the newly built Mississippi State University (MSU) College of Veterinary Medicine, but she quickly discovered her failure in preparing for college science and mathematics classes. "There was no such thing as accelerated coursework when I was in high school. Therefore, I had to change my major to animal science with the intention of working as a veterinary technician."

Palmer met her husband at MSU and the couple moved to Danville, VA, after graduation where he worked for a large corporation and she was employed as a veterinary technician. Palmer continued to work as a vet tech after the birth of her three children. Shortly after being transferred to Florence, AL, in 2000, Palmer's husband decided to return to graduate school to pursue an additional degree, and he suggested that she go back to college and major in nursing as an added form of job security for the family.

As a SOTA (Student Over the Traditional Age), Palmer realized she enjoyed not only the field of nursing but school as well. "As a non-traditional student, learning was easier even though I seemed to have less time. As a medical/surgical nurse at Helen Keller Hospital, I enjoyed floating to other floors where I could learn new nursing techniques in PCU, ICU, Pediatrics, OB, and Post-Surgery. I continued to learn through PALS, ACLS, and CEUs."

While conducting graduate study coursework, Palmer became interested in diabetes research. "After submitting my master's thesis the rural clinic where I was assigned became eligible to receive state money for a new microscope with monitor (to educate nursing students and patients), laboratory equipment, and software to facilitate patient education."

Palmer's research uses U.S. data from the Reasons for Geographic and Racial Differences in Stroke (REGARDS) study, and includes 30,239 black and white community-dwelling residents aged 45 years and older, over 6,000 of whom have diabetes. The project, sponsored by the National Institutes of Health, focuses on learning more about the factors that could increase a person's risk of having a stroke. Palmer said the purpose of the REGARDS Project is to understand why people in some parts of the U.S., commonly referred to as the "stroke belt" develop more strokes than other people in the country. Nationally, strokes rank third in the U.S. as the leading cause of death and disability. Both blacks and whites suffer from strokes - but more blacks die from strokes. Alabama is one of 11 stroke belt states. The other 10 states include Arkansas, Georgia, Indiana, Kentucky, Louisiana, Mississippi, North Carolina, South Carolina, Tennessee, and Virginia.

It is noteworthy to mention that stroke risk in Mississippi is one third higher than the national average. Palmer and other researchers focusing on diabetes research believe the higher than average rates of obesity, smoking and high blood pressure account for the increased risk of death from cardiovascular disease in the stroke belt. According to the 2015 Gallop-Healthways Well-Being Index® the national obesity rate rose to 28 percent last year, and Mississippi has the highest obesity rate in the nation. Also included in the states with the highest obesity rates were Arkansas, Alabama, Kentucky and Indiana - five of the stroke belt states.

"I am using logistic regression to assess whether widowhood is associated with diabetes self-management independent of demographics, socioeconomic factors, and lifestyle risk factors. Since diabetes affects older individuals disproportionately, many will experience widowhood," Palmer explained. There is great opportunity and interest in the practicing nurse workforce in addressing diabetes self-management in the older individual. My plans are that my study will provide missing information on the potential effects of widowhood on self-management behaviors, guiding nursing clinical care management and policy."

Palmer recently submitted the article "The Effect of Widowhood on Diabetes Self-Management," for publication in "The Journal of Nursing Scholarship". Last year, her article "Facilitators of Diabetes Self-Management Among Rural Individuals" was published in "Home Healthcare Nurse". Additionally, an abstract submission entitled "Neurocognitive Predictors of Driving in Older Adults with HIV: A Driving Simulator Study," co-authored by Palmer will be presented at the XXII World Congress of Neurology Oct. 31-Nov. 5, in Santiago, Chile.

Palmer is currently working on her Ph.D. She chose The University of Alabama at Birmingham (UAB) because of its online program of study. "This year, because I am so close to finishing my doctoral program, I began looking at universities not only heavy in quality nursing education but also research. UAH was my first and only choice for my teaching career. I have felt welcome from the moment I stepped in the doors of the nursing building. I will be team-teaching pharmacology and hope to bring a little of my hospital experiences to the classroom. Additionally, I will be teaching medical/surgical clinical, a class for which I feel I have prepared these past seven years."

She previously served as an adjunct clinical nursing supervisor at UNA. Palmer is a member of the International Council of Nurses, Sigma Theta Tau International Honor Society, and the Graduate Nursing Student Academy. She is also a member of the Northwest Alabama Community Health Association Board of Directors.

Palmer earned a BS in animal science from MSU, a BSN from UNA, and an MSN from UA. She is expected to receive her Ph.D. from UAB in 2016.