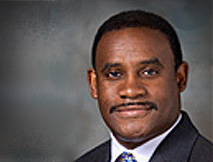 Toney's business address "Customer Service Around the Globe," will be presented on Thursday, Nov. 21 at 5:30 p.m., in the Chan Auditorium located in the College of Business Administration Building. The talk is free and open to the public. A reception will be held immediately after the presentation.

Toney joined Ford Motor Company in 2000. He has held numerous leadership positions in logistics, operations, and parts and service within the company. Most recently he served as executive director, Global Material Planning and Logistics, Ford's highest-ranking logistics executive.

Before joining Ford, Toney was employed at Caterpillar, Inc., for 16 years in a variety of managerial assignments. He also worked at American Honda Company for seven years, rising to the position of assistant vice-president, Procurement/Distribution.

In 2006, Toney was named a UAH Alumni of Achievement Honoree. While attending UAH, he played on the Charger basketball team during the 1973-74 season, and the 1974-75 season. He earned a Bachelor of Science degree in management from UAH, and a Master's of Business Administration from the University of LaVerne in LaVerne, Calif.

Toney serves on the Trustees Foundation at The University of Alabama, and on the School of Business Advisory Council at both his alma mater and at Central State University in Wilberforce, OH.

In 2007, World Trade Magazine named Toney as a Global Top 50 decision maker in the logistics field. Additionally, he has been featured in several publications including Bloomberg Businessweek, Automotive LOGISTICS, and Producer 10.