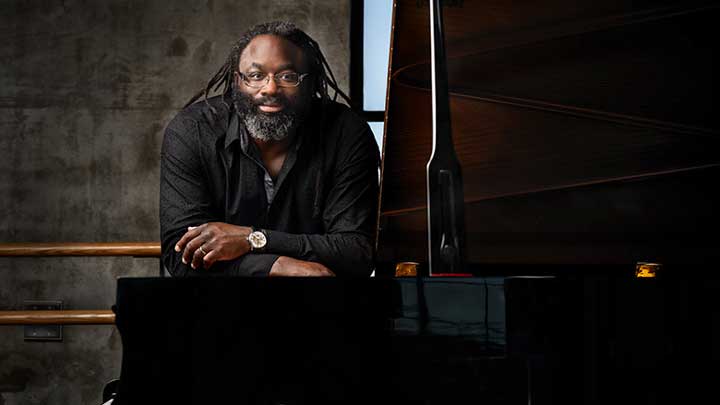 International pianist and Yamaha artist, Awadagin K. A. Pratt, will give a masterclass, and concert during a two-day visit April 6 and 7, on the campus of UAH.

Internationally acclaimed pianist and Yamaha artist, Awadagin Pratt, will hold a masterclass, and give a concert performance during a two-day event April 6 and 7, on the campus of The University of Alabama in Huntsville (UAH).

Pratt’s visit to campus is sponsored by the Department of Music, and is part of the UAH Constellation Concert Series showcasing the talents of world-class performers. On Friday, April 6, from 2 p.m. to 4 p.m., Pratt will lead a Masterclass featuring local and distance learning piano students, using groundbreaking Yamaha Disklavier (DCFX) technology over the Internet. The class is free and open to the public. And, on Saturday, April 7, at 5 p.m., Pratt will perform an exciting and eclectic concert, celebrating UAH’s new Yamaha DCFX concert grand piano. Both events will be held in UAH’s newly renovated Frances Roberts Recital Hall.

"The Department of Music is delighted to host Mr. Awadagin Pratt for a concert and masterclass utilizing our new Yamaha DCFX Concert Grand Piano and we remain grateful to our friends at AB Stephens and Yamaha Corporation of America for making his appearance possible," said Dr. C. David Ragsdale, UAH Department Chair, Music. "The Constellation Concert Series has already made an indelible mark on the culture of Huntsville, but Mr. Pratt’s performance at UAH, utilizing our new Yamaha DCFX Concert Grand Piano is, I hope, just the beginning of some amazing opportunities that the revolutionary instrument and successful concert series will unlock for the Huntsville community," Ragsdale added.

"We are thrilled that students and the Huntsville community will have first-hand experience in this innovating music weekend. It not only features Mr. Pratt’s versatile piano performance, but also his masterclass teaching for the first musical and technological collaboration between UAH and The University of Cincinnati – College Conservatory of Music," said Dr. K. Melody Ng, UAH Assistant Professor/Artist-Teacher of Piano.

"The non-traditional masterclass will be the first of its kind in the region, where students of UAH and CCM will perform together with a 400-mile distance, and give a joint piano duet live performance simultaneously in Huntsville and Cincinnati through the real-time distance connecting technology with our newly acquired Yamaha DCFX concert grand where each key is fiber-optics equipped," noted Ng. "This season finale also showcases UAH’s pioneering vision in fostering creative research and education in music, innovation, and technology. We are thankful for all the support to make this possible and know that this is only the beginning of many innovative Music-STEM joint ventures," she said.

Pratt is acclaimed for his musical insight and intensely involving performances in recital and with symphony orchestras.

Born in Pittsburgh, PA, he began studying piano at the age of six. Three years later, Pratt’s family moved to Illinois and he began studying violin. At the age of 16 he entered The University of Illinois where he studied piano, violin, and conducting. Thereafter, Pratt enrolled in The Peabody Conservatory of Music, where he became the first student in the school’s history to receive diplomas in three performance areas: piano, violin and conducting.

In recognition of this achievement and for his work in the field of classical music, Pratt recently received the Distinguished Alumni Award from Johns Hopkins.

In 1992 Pratt won the Naumburg International Piano Competition and two years later was awarded an Avery Fisher Career Grant. Since then, he has played numerous recitals throughout the US including performances at Lincoln Center, Kennedy Center, Dorothy Chandler Pavilion in Los Angeles and Chicago’s Orchestra Hall. His many orchestral performances include appearances with the New York Philharmonic, Minnesota Orchestra and the Pittsburgh, Atlanta, Baltimore, St. Louis, National, Detroit and New Jersey symphonies among many others. Summer festival engagements include Ravinia, Blossom, Wolftrap, Caramoor and Aspen, the Hollywood Bowl and the Mostly Mozart Festival in Tokyo.

As a conductor, Pratt participated in the American Symphony Orchestra League and Conductor's Guild workshops and the National Conducting Institute, where he worked closely with Leonard Slatkin and conducted the National Symphony at the Kennedy Center. He has also conducted the Toledo, New Mexico, Vancouver WA, Winston-Salem, Santa Fe and Prince George County symphonies, the Northwest Sinfonietta, the Concertante di Chicago and several orchestras in Japan.

A great favorite on college and university performing arts series and a strong advocate of music education, Pratt participates in numerous residency and outreach activities wherever he appears; these activities may include master classes, children's recitals, play/talk demonstrations and question/answer sessions for students of all ages.

Pratt has been the subject of numerous articles in the national press, including Newsweek, People Magazine and New York Newsday. He was named one of the 50 Leaders of Tomorrow in Ebony Magazine's special 50th anniversary issue and has been featured on National Public Radio's Performance Today, St. Paul Sunday Morning and Weekend Edition. On television, Pratt has performed on the Today Show, Good Morning America and Sesame Street, been profiled on CBS Sunday Morning and was one of the featured soloists on PBS's Live from the Kennedy Center - A Salute to Slava. In November 2009, Pratt was one of four artists selected to perform at a White House classical music event that included student workshops hosted by First Lady Michelle Obama and performed in concert for guests including President Obama. He has performed two other times at the White House, both at the invitation of President and Mrs. Clinton.

Pratt’s recordings for Angel/EMI include A Long Way From Normal, an all Beethoven Sonata CD, Live From South Africa, Transformations and an all Bach disc with the St. Lawrence String Quartet. His most recent recordings are the Brahms Sonatas for Cello and Piano with Zuill Bailey for Telarc and a recording of the music of Judith Lang Zaimont with the Harlem Quartet for Navona Records.

Concert general admission is $20 and the senior/student rate is $10. For directions to UAH Roberts Recital Hall, please visit: uah.edu/ahs/departments/music/contact.