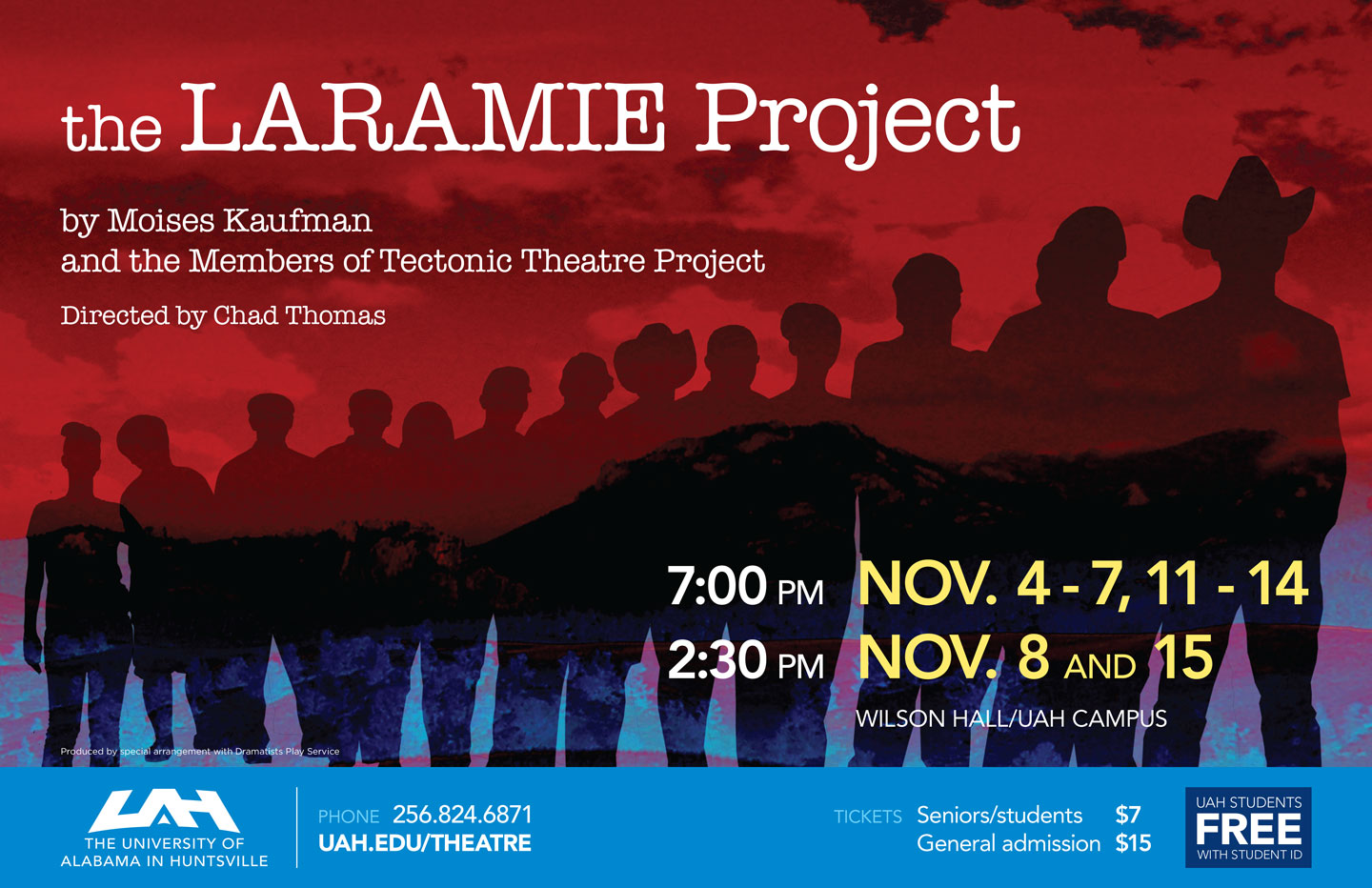 On the night of Oct. 6, 1998, a biker found the badly beaten body of Matthew Shepard, abandoned and tied to a cattle fence on the outskirts of Laramie. Shepard, a 21 year-old gay student attending The University of Wyoming would die six days after the brutal attack.

"The Laramie Project," an internationally successful play by Moisés Kaufman and the Tectonic Theater Project (based in New York city), will be performed by The University of Alabama in Huntsville (UAH) Theatre Program Nov. 4 -15, in the Wilson Hall Theatre. Specific show dates include Nov. 4-7, and Nov. 11-14, at 7 p.m., and Sundays, Nov. 8, and 15, at 2:30 p.m. General admission tickets are $15, UAH students free, and students from other schools and seniors $7.

Dr. Chad Allen Thomas, Assistant Professor of Shakespeare and dramatic literature in the English department at UAH, and Director of the Laramie Project, said the play is based on hundreds of interviews conducted by members of the Tectonic Theater Project. The play tells the true story of how a town reacts to the murder of Shepard, who was robbed, tortured and left to die because he was gay. The Wyoming community attempts to answer the question, "How could this happen in our town?"

"The play is now sixteen years old, yet it explores themes that remain entirely relevant today, which is why I advocated for the production," said Thomas. "Our presentation offers meditations on the nature of community, on the effect of 'othering' (whether intentional or not), and most notably on the power of words to have a real impact in the world, both positively and negatively. Thus, The Laramie Project, which kicks off the 11th season of theatre at UAH, offers lessons for both audiences and actors.

"I am consistently inspired by our audiences' dedication to and our students' commitment in presenting productions that exemplify the very best traits of theatre: collaboration, artistry, and truth," continued Thomas. "To that end, our actors and creative team include UAH students, alumni, faculty, and staff, as well as our wonderful neighbors from the larger Huntsville community. You may have seen some of the actors in The Laramie Project in previous shows at UAH, while others have appeared in shows at a wide range of Huntsville theaters, and still others are making their debuts; knowing that they dedicated their time, energy, and emotion so fully and so generously to this project gives me confidence that the Theatre Program at UAH, under David Harwell's watchful eye, must be getting something right." Harwell is Associate Professor of Communication Arts and Director of the UAH Theatre Program.

Shepard's mother, Judy Shepard, spearheaded "The Matthew Shepard Act," which expanded the federal-hate crime law to include crimes based on gender and sexual orientation.

In 2009, she authored the New York Times best-selling book, The Meaning of Matthew: My Son's Murder in Laramie, and a World Transformed. And, earlier this year the documentary "Matt Shepard is a Friend of Mine," revisits Matthew's murder and provides a new look into his life.