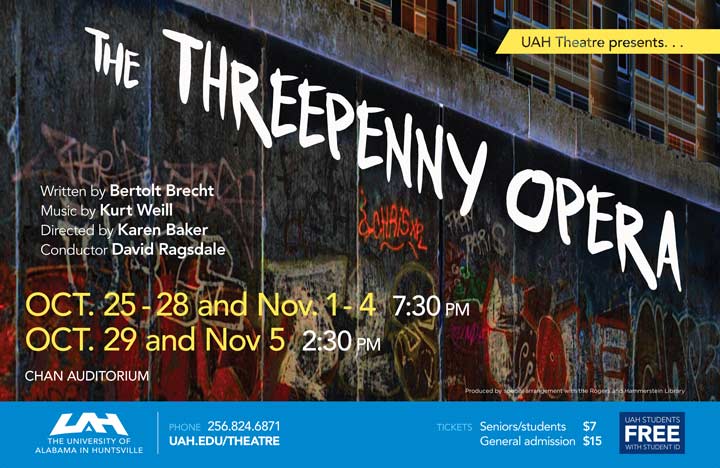 UAH Theatre continues its 2017-2018 season with the classic musical of crime and passion, "The Threepenny Opera," by Kurt Weill and Bertolt Brecht.

Brecht and Weill turned to John Gay's 18th-century "The Beggar's Opera" to fashion this savage, biting commentary on bourgeois capitalism and modern morality. The bitter tale is told of the predatory outlaw known as Mack the Knife. He secretly marries the daughter of Berlin's underworld boss but is soon betrayed by his sinister in-laws and sent to prison. After being freed by the police chief's daughter, he is again betrayed – this time by a prostitute – and sentenced to death. At the final hour, he manages a reprieve from the Chancellor, thus providing a menacing finale of ferocious irony.

Set in gritty, 1984, pre-unified Berlin, this punk take on a classic tale brings a fresh and colorful perspective to a familiar story and singable music. It is directed by Karen Baker, in collaboration with Dr. Chris Puckett and Dr. David Ragsdale from the Department of Music. Baker made the choice to set the play in a broken down Berlin, saying, "I grew up during the ’80s and watched the wall come down. The disparity of wealth in the 1980s that Brecht and Weill were addressing in 1928, is unfortunately still a relevant issue today."