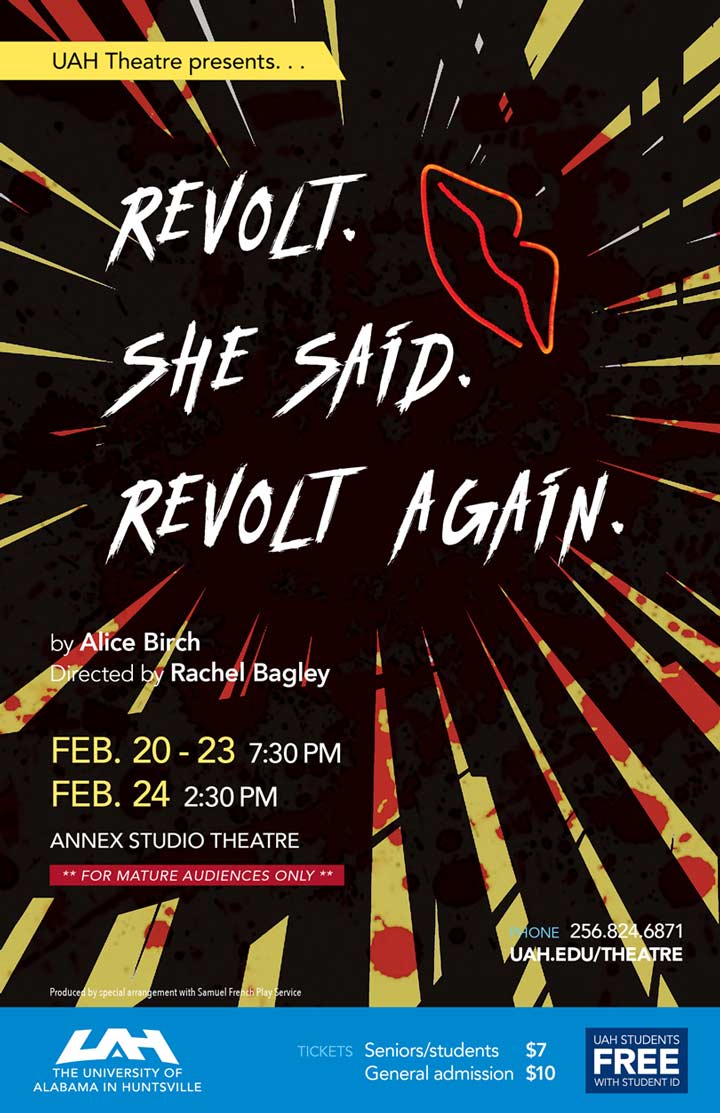 UAH Theatre continues its 2018-2019 season with Revolt. She Said. Revolt Again. Our most challenging show yet, this play is a contemporary and abstract exploration of the darkness that women must overcome to regain their agency.

Written by British playwright Alice Birch and originally produced at the Royal Shakespeare Company in London, Revolt. She Said. Revolt Again. pulls no punches in how it illustrates the current status of women in society. Birch is also the winner of the 2018 Susan Smith Blackburn Prize. This award is given annually to a woman who has written a play of “outstanding quality” for the English-speaking theatre.

Directed by UAH Theatre graduating senior Rachel Bagley, the play is a grouping of vignettes that asks how to revolutionize language, relationships, work, and life in general while bursting at the seams of conformity. Birch articulates the alternatives that come to women’s minds in dealing with how they as women are dealt with – as objects of love and lust, as employees and employers, as mothers and daughters. No matter the context, every response proves inadequate, as does, above all, the language in which it is codified.

In working on the production as the capstone project for her theatre degree, Bagley says, “I went through what felt like hundreds of scripts before I found this show. I knew I wanted a project that meant a lot to me, so I chose to stay within the LGBT and women’s issues genres. This play is about everyday issues faced by women and galvanized these problems to make an impact on the audience. At the end of the day it is highly unfortunate that a show like this even has to exist. The process of this show has been incredible. This play has forced the actors and myself to question gender roles and the societal views that are pushed on us all on a daily basis. This is the kind of show that sticks to your brain after leaving the theatre. It is shocking, provocative, informative, and most importantly, empowering.”

This play is for mature audiences only. Trigger warnings for language, vulgarity, violence, nudity, and rape.