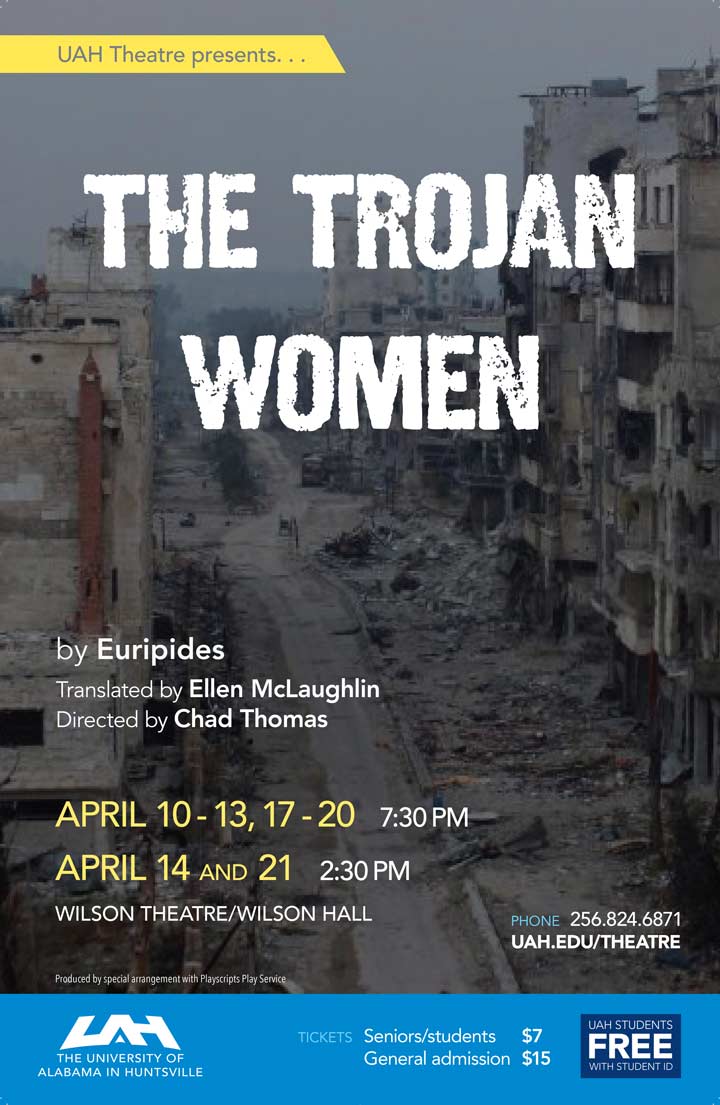 UAH Theatre finishes its 2018-2019 season with the ancient Greek tragedy about war and loss, "The Trojan Women." In a new translation and adaptation by noted playwright Ellen McLaughlin, this play asks audiences to consider the cost of war.

Originally written in the Ancient Greek Golden Age by Euripides, "The Trojan Women" isn’t about the heroes and legends we know from the Trojan War, like Achilles, Agamemnon, Hector, or the Trojan Horse. It’s about those left behind once the city of Troy is defeated. The women of Troy wait to be parceled off to the victorious Greeks as sex slaves, and try to find a way forward in this new reality that faces them. Led by their queen, Hecuba, they encounter the beautiful Helen of Troy, the cause of all their misery, and a loss they could have never anticipated. Starkly beautiful and tragic, "The Trojan Women" broke new ground in its time by asking its Greek audiences to think about the Trojan War from a new perspective.

Directed by Dr. Chad Thomas, associate professor in the Department of English, the play is a chance to feature the strong women actors of the UAH Theatre program. In working on the production, Thomas says, "Although Euripides's play is 2,500 years old, Ellen McLaughlin's adaptation gives the impression of a very modern work of theatre. The ways the characters in this version of "The Trojan Women" express their feelings seems so honest, so real, and so relatable. I think it's easy, especially when a country has been at war for a long time, to lose sight of the humanity one's adversaries; our production goes out of its way to stress that idea through the commonality of emotion and suffering. Plus, from a dramaturgical standpoint, Greek tragedy is one of the most important genres of theatre, and a style with which our students should be conversant, and one of the best ways to assist in this process is to stage a production; so, in that respect, this play does double-duty by engaging with the historical past and emphasizing a lesson in humanity for the present day."

"The Trojan Women" runs April 10-13 and April 17-20 at 7:30pm and April 14 and 21 at 2:30pm in the Wilson Theatre on the UAH campus. Tickets are $10 for general admission, $7 for seniors and non-UAH students, and free for UAH students with ID. Tickets can be purchased at the door or online at eventbrite.com.