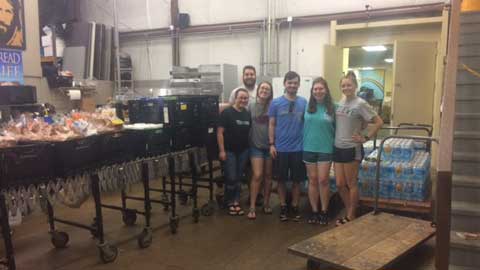 Students at The University of Alabama in Huntsville (UAH) are using leftover Food Service Dining Dollars to purchase non-perishable food, drinks and hygiene products to be distributed to those in need by local community organizations under an innovative program created by a student.

UAH C.H.A.R.G.E. (Chargers Hope and Resourcefully Give Essentials) is the brainchild of UAH nursing senior Elizabeth Gates, who is president of the student organization. It has attracted the interest of other universities wishing to start their own versions.

“Yes, C.H.A.R.G.E. was my idea, but I had a lot of help from friends, faculty and fellow students,” says Gates, who is from Union Grove, Ala. The idea arose from conversations she had with fellow students about their leftover Dining Dollars. “I heard about students going and buying cases of water, Red Bulls and candy bars from the store at the end of the semester because they didn't know what else to do with it.”

“He put me in touch with Sukesh Parameswaran with Sodexo, who partnered with me to create the package and make purchasing possible,” she says. “Sodexo's marketing manager, Makinsie Gault, helped a great deal with marketing and getting the actual purchasing kick-started.”

C.H.A.R.G.E. has partnered with the on-campus C-Store managed by Sodexo, the campus food service provider. Students with unused Dining Dollars on their account can go the C-Store within the last two weeks of fall or spring semesters to purchase a C.H.A.R.G.E. care package. The package includes food, water and hygiene items.

“All of the Sodexo team at the C-Store was very helpful throughout the entire process,” Gates says.

Maxon says he saw immediately how C.H.A.R.G.E. would be an excellent way to address two academic year-end challenges that UAH faces every May.

“It allows our students to put their unused dining dollars that remain on their accounts and are going to be forfeited at the end of the spring semester to good use in support of a very good cause,” Maxon says. “And it also will help Sodexo with their inventory control in the C-Store as they prepare to close it for the summer. I am continuously amazed at how creative and innovative our students are here at UAH.”

“We know our items were used in this weekly distribution,” says Richards. “A portion of the water donated was given to schools in the area, as the school could not provide enough water to hydrate the students at recess, lunch and various other activities.”

Students can also donate individual items, which can be dropped off during two C.H.A.R.G.E. tent days, or students can email charge@uah.edu to set up a pick-up time.

C.H.A.R.G.E. members Michelle Weithop, Audrey Johns, Cydney Amos, Holly Smith, Emily Ford and Shaun Gates each worked toward building the structure and system of C.H.A.R.G.E., as well as the marketing, collection and distribution efforts. During item collection and information distribution, there were several other students who assisted in the work, and C.H.A.R.G.E. also received donations from some faculty members.

C.H.A.R.G.E. has provided UAH students with a way to directly give necessities and hope to those in need in the community, Gates says.

“This has been evident through speaking with the director and volunteers at Manna House. Manna House stated that they do not often receive bulk donations from individuals or small groups like this,” she says.

“I believe that students often feel that in their current walk of life they cannot benefit many others, due to lack of funds or time, but this has provided an outlet to serve in an easy yet meaningful way,” Gates says. “I truly believe that this has the potential to make bigger and bigger impacts in the Huntsville community as we grow and the word spreads.”