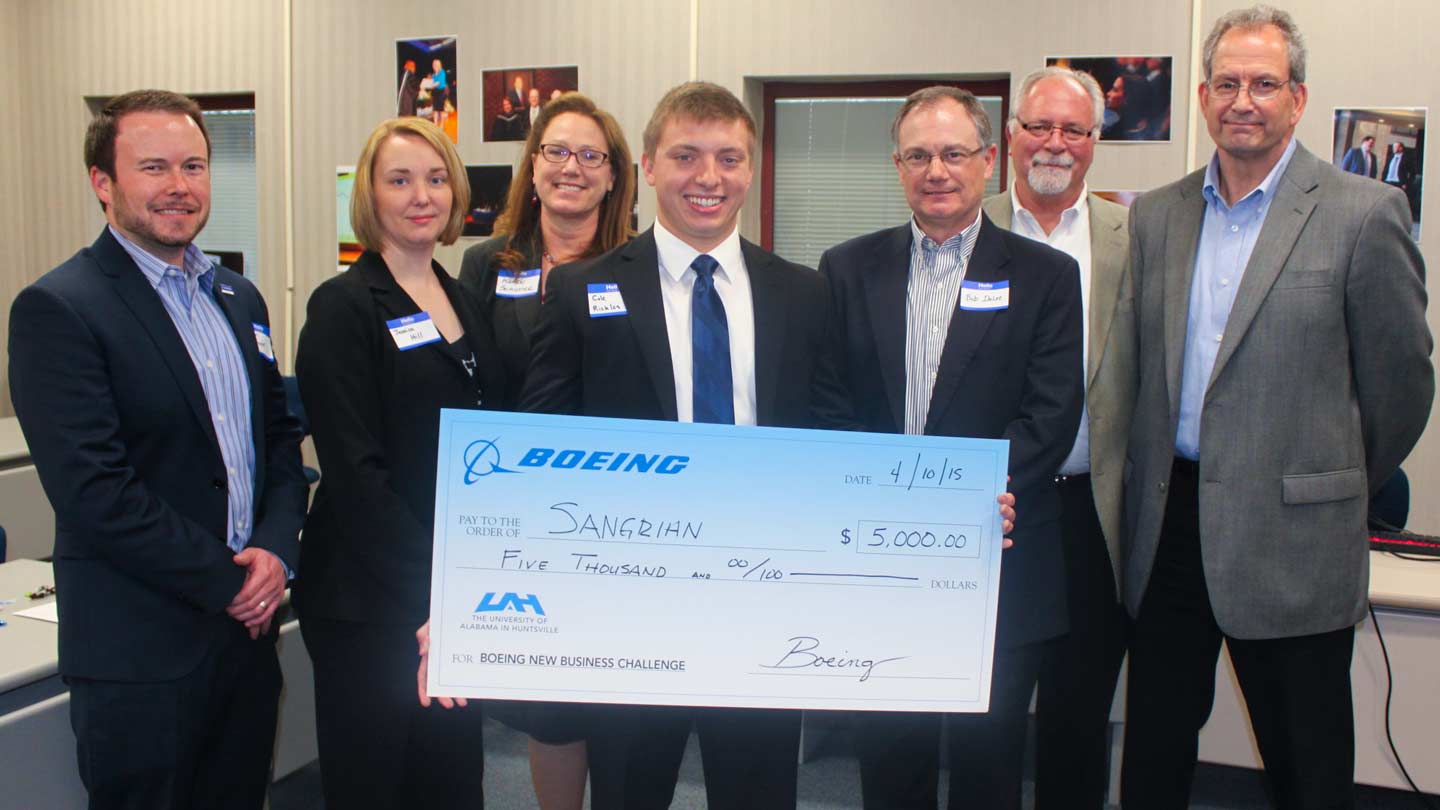 Cole Rickles, a senior business management major at The University of Alabama in Huntsville (UAH), took home the top prize and a $5,000 tuition scholarship in the 2015 Boeing New Business Challenge held Friday, April 10. The competition, which is coordinated by the Innovation, Commercialization, and Entrepreneurship (ICE) Lab in the College of Business Administration, challenges UAH students to conceive, plan, and pitch new business concepts.

"It's an immensely valuable contribution that promotes entrepreneurial thinking among our students," said Dr. John R. Whitman, visiting professor and director of the ICE Lab. Of Rickles' victory, he added, "Cole has been an outstanding student in two of my courses and it is gratifying to see his success applying what he has learned, fueled of course, with his own creativity and entrepreneurial enthusiasm." 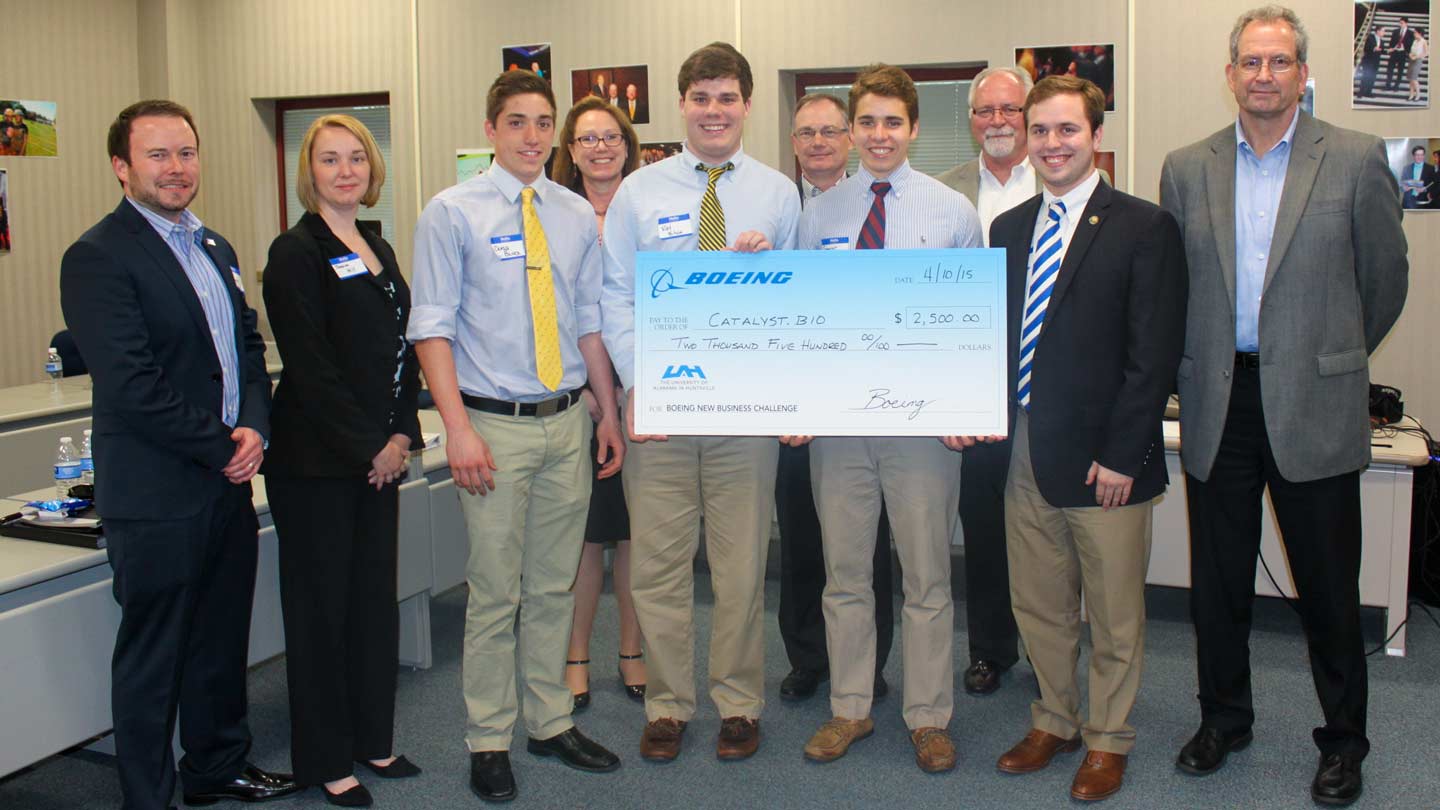 "Boeing is delighted to sponsor this event for the third consecutive year, and we are always amazed at the creative concepts and plans for the new business ventures by the UAH teams," said Kachelman, who also coordinates Boeing's Business Intern Program . "Several of the top teams had very good plans for implementing their ventures and demonstrated real promise in being implemented as a new business."

Rickles, a native of New Hope, Ala., wowed the judges with the comprehensiveness of his pitch for a business that would streamline the process to make blood and plasma available to researchers. In particular, he said, Sangrian would target college students for blood and plasma donations, paying them a small fee and rewarding them with a loyalty program. "Branding will be a large part of the success of Sangrian by consistently providing excellent care for the participant while in the process of giving their plasma."

With Boeing presenting a total of $10,000 in scholarship money, however, Rickles wasn't the only winner. Craig Block, Spencer Jones, Garrett Wilson, and Reid Wilson received a $2,500 tuition scholarship for their second-place entry, Catalyst.Bio. Wilson, a junior biology major, described the venture as "Alabama's first biotech accelerator," offering lab space and mentorship to help scientists and entrepreneurs turn their ideas into products. 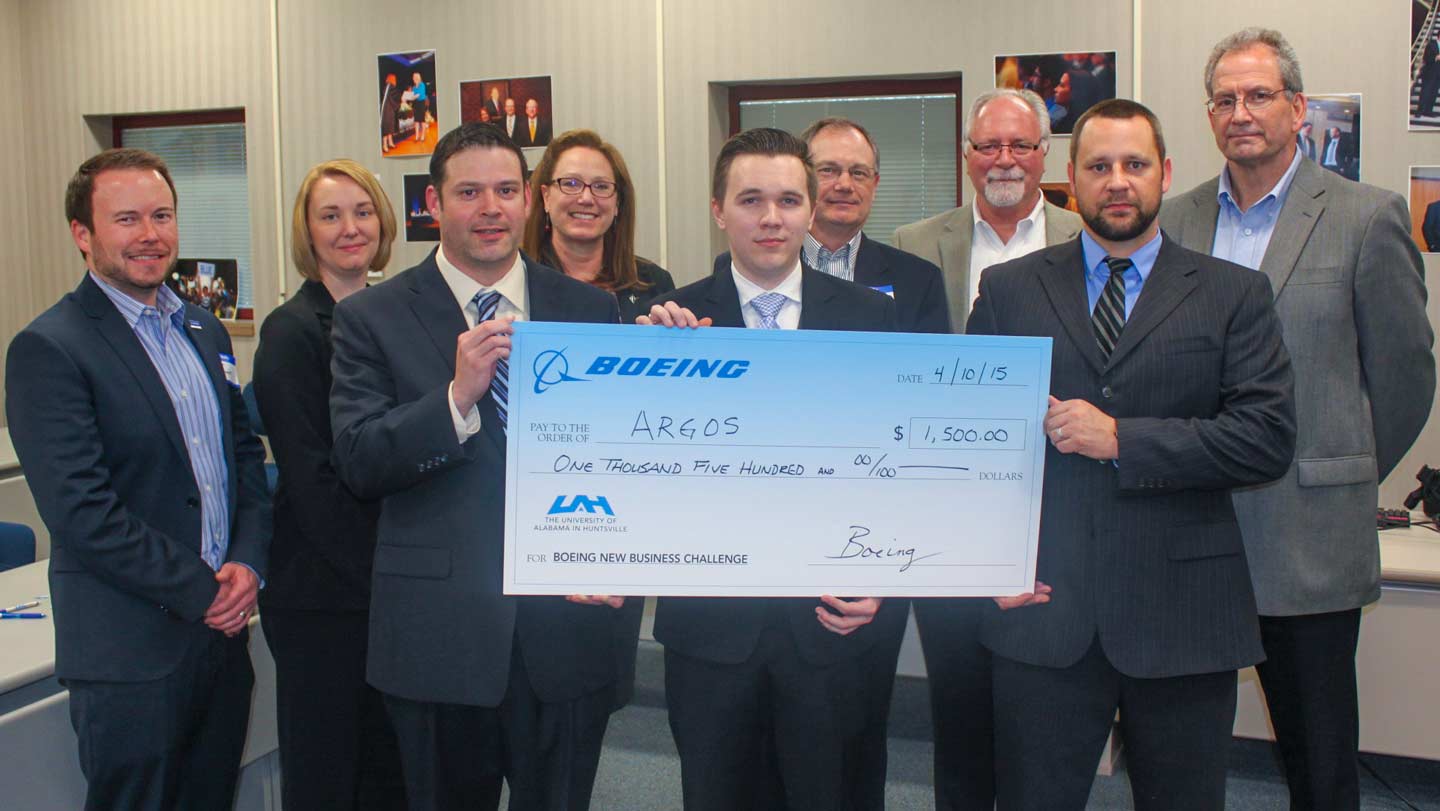 Matt Ashby, Andrew Morgan, and Stefan Riddle received a $1,500 tuition scholarship for their third-place entry, Argos. "It's a company that creates virtual and augmented reality software for the purpose of education," said Riddle, a graduate student in UAH's MBA program.

And two entries received equal tuition scholarships of $500. The first, a flexible film called Skin Defender that would protect soldiers from chemical and biological toxins, was pitched by Laura Walker. Encouraged by her success, the freshman chemistry major said she would "re-enter and perfect the weaker portions" of her proposed business next year.

The second, a one-stop home-care service for the elderly called Challenge Accepted, was pitched by Brandon Ferguson and Dominic Hanna. Hanna, a civil engineering major from the Bahamas, said the challenge yielded "invaluable experience and feedback from the judges and administrators of the program." Sophomore business major Tchaasu Taylor also received an honorable mention for his proposed real estate business.

But while Rickles said the monetary prize was "something great to take away," what really stood out for all the competitors was the experience itself. "It challenged me intellectually to think in new ways and it really forced me to think like an entrepreneur," he said. "I gained a great experience where I learned a lot and received great feedback for when I do start my own business."

And that, ultimately, is the intent of the challenge - that the process of creating and pitching their own companies will give students the confidence to take the next step after graduation. Said Kachelman, "We hope they move forward with launching their ideas - and we hope that next year we can have a record participation by teams from the UAH student body!"