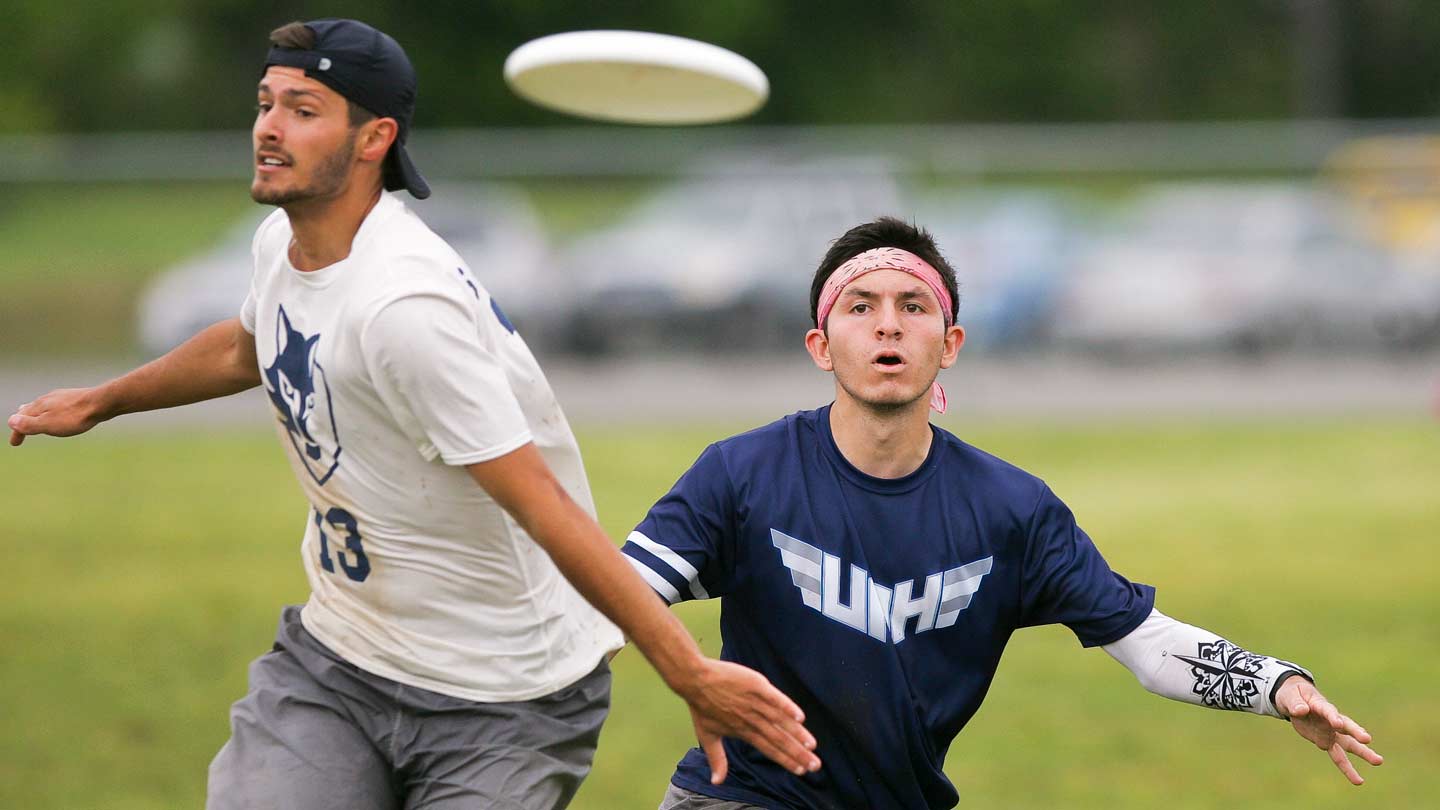 There is no substitute for guts and grit, especially in a club sports team with a relatively short history, and the UAH Nightmares Ultimate Frisbee team achieved success this year, finishing third in national tournament play against stiff competition after becoming just the second team ever to earn a national bid from the Southeast region.

Now commonly known simply as Ultimate, the non-contact flying disc game evolved from the Frisbee-loving counter-culture of the 1960s, and the UAH campus is home to a disc golf course.

"UAH Student Government Association and the UAH Office of Recreation have been hugely helpful in paying for a lot of the costs we incur during the season," says Werline.

UAH grabbed a ninth seed spot among the 16 teams at the National Championship in Lexington, Ky., after a clean 6-0 record at the D3 Southeast Regional Tournament in Foley, Ala.

UAH defeated North Georgia, Georgia College, Samford, Embry-Riddle (Fla.), Berry and Union on the way to being crowned regional champion and earning the only bid to the D3 National Championship out of the Southeast Region.

Because this is a club sport, the national berth presented the team another challenge, which it also exceeded by raising $3,025 from the community for travel.

"As difficult as it was, we dealt with ‘living in the moment’ more than anything all year," says coach Radcliffe, sounding a bit like an acolyte of mindful meditation expert Dr. Jon Kabat-Zinn. "We knew that it didn't matter what happened in the past, or what could potentially happen in the future; if we didn't take care of what we needed to do in the moment, then none of that matters.

"We tried to keep the guys away from worrying about tournament seeding, national rankings, or worrying about even the score of the game they were in," he says. "‘Create’ was a word we kept saying. Telling our guys to stop looking into the future, and instead look at the situation they are currently in, and create something that they can control. Things like effort, emotions and mindset."

Focusing on the now paid off handsomely.

"We didn't allow our guys to say the word ‘nationals’ throughout the entire year, trying to help emphasize how important living in the moment was," Radcliffe says. "So our journey to nationals was a day-by-day battle of improving skill, testing mental strength, and fine tuning performance. We took it one step at a time, and tried to do it the right way."

The Kentucky nationals exposed the Nightmares to a new level of play.

"We saw better talent from teams like Davidson, Dartmouth and Air Force than we had seen most of the year," Radcliffe says. "Teams made us work hard, play the right way, and made us pay when we made mistakes. No team ever gave us a single game, we had to fight for every point, and that's valuable experience that our guys will take with them the rest of their playing career. It was a great experience for each of these guys, since nationals is a bucket-list item for every Ultimate player who has ever played this sport."

"The sectionals semifinal was an extremely tight game against Union, that really tested our ability to stay resilient and play the game the right way. It was a great segue way win for us into regionals," Radcliffe says. "Regionals brought a variety of challenges that pushed us to stay mentally strong, physically determined and hungry for every point. We pushed the characteristic of humility, to know that no matter how well the last point went, this next point had to be earned. Our guys won our pool on Saturday, and walked into Sunday itching for a win. We stayed focused and hungry, and the team dominated that game from start to finish."

Club sports offer a perfect solution to participating in competition and athletics for those who want to balance them with other goals, says Nightmares president Werline.

"It is not as intense as the varsity sports run by the university and we create our own schedule and rules. This allows our players to still be able to focus on their academics, jobs or other clubs," Werline says. "For me personally, I enjoy working towards a common goal with other guys, and the competition against other college groups. This team has given me friendships that otherwise would not have happened and the sport itself gives me a reason and method to stay active."