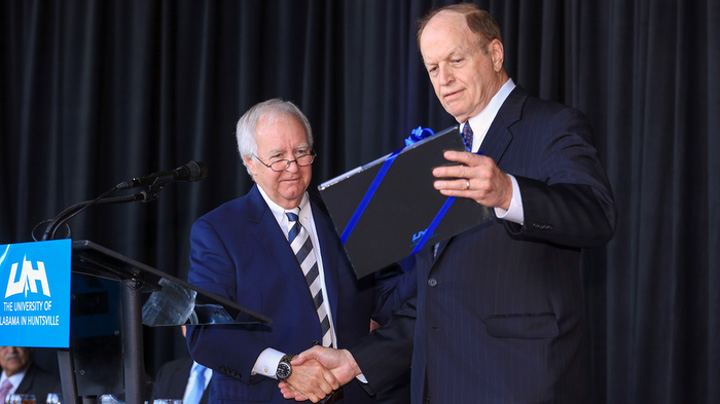 U.S. Sen. Richard C. Shelby lauded The University of Alabama in Huntsville (UAH) Thursday as "one of the premier research and educational institutions in the United States" and urged local and regional officials to support the university's efforts in a speech at the U.S. Space & Rocket Center's Davidson Center for Space Exploration.

"I believe that supporting our research universities, like UAH, is one of the smartest ways for Alabama to secure high-quality jobs and to secure the United States' competitive edge in the global economy in which we live today," Sen. Shelby said. "That is why I encourage all of you, the leaders of this community, to join me in strongly supporting UAH and the innovative thinking it contributes to Huntsville.

"Many of you may remember when I said that UAH is well on its way to becoming the 'MIT of the South,'" he said. "Today, I would like to share a few of UAH's impressive accomplishments with you."

Shelby mentioned UAH's Tier 1 national university listing by U.S. News & World Report, the university's No. 5 ranking nationally in aeronautical and astronautical engineering research, its Very High Activity Research ranking by The Carnegie Foundation for the Advancement of Teaching, and the fact that UAH has the largest research expenditures of any public university of its size in the United States.

He told the audience - which included Huntsville Mayor Tommy Battle, Madison County Chairman Dale Strong, state legislators, members of the Chamber of Commerce of Huntsville and Madison County, area business and military leaders, and UAH officials - that UAH consistently ranks among the top universities in the nation in NASA and Dept. of Defense sponsored research.

UAH creates incentives for companies to call Huntsville their home, which helps to create an environment for economic and job growth.

"The research conducted right here at UAH has contributed to making space and missile defense possible," Sen. Shelby said. "The university is a key partner in the effort to propel humans to Mars."

Sen. Shelby traced UAH's lineage from the vision of Dr. Wernher von Braun for a research university "where highly trained graduates could be found and where the existing workforce could earn graduate degrees in close proximity" and where NASA could find a ready source of innovation.

Today, that vision has become a reality," Sen. Shelby said. "UAH graduates more than 1,500 students annually and approximately two-thirds of its students earn a degree in business, engineering or science. These students develop their great talent by working with top researchers and professors, and also through pursuing internships and co-ops in field where they conduct world-class research."

The benefits to the North Alabama area are many, he said.

"UAH creates incentives for companies to call Huntsville their home, which helps to create an environment for economic and job growth," Sen. Shelby said. "The foremost of those incentives is the university's top-notch graduates that help comprise the high-level and innovative workforce that this community needs."