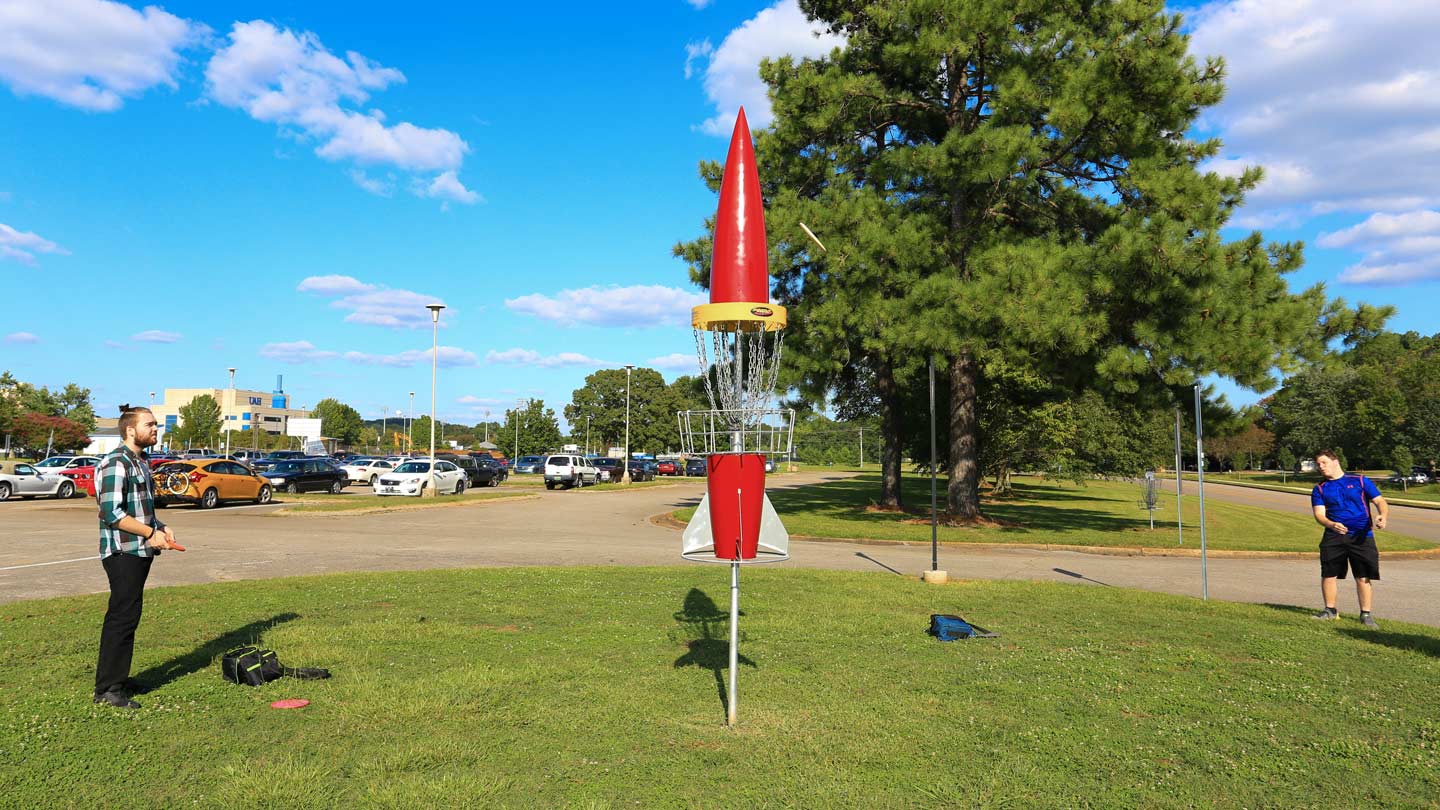 Break out your polyester leisure suit and eight-track disco tapes and get ready to party on your orange shag carpet, because the disc golf course at The University of Alabama in Huntsville (UAH) has turned 40 years old.

It’s one of the oldest disc golf courses in the world, but don’t be thinking UAH’s course has gone the way of the fashions and fads of the ’70s, because it’s still a huge attraction known to disc golfers across the globe.

Back in 1976, when the layout and planning of the first version of the course by avid disc golfers Tom Monroe and Lavone Wolfe was getting underway, the song "Shake Your Booty" by KC and the Sunshine Band was rocketing up the charts and blasting from those continuous loop eight-track tape players in cars everywhere.

And a ruggedized version of the eight-track tape player was being developed in Huntsville to record data on the Voyager 1 and Voyager 2 spacecraft, which were launched in 1977 and have by now traveled so far they are in interstellar space, eight-tracks still recording.

In ’76, young disc golfers Monroe and Wolfe had just matriculated and landed in Huntsville.

"Tom Monroe from Huntsville is generally recognized as the first disc golfer in the Southeast," says Wolfe. "We were both in school together at UNA in Florence, and in the 1970s we took up Frisbee golf, or disc golf as it is called nowadays."

Monroe today lives in Hoover and is a pro with over 90 career wins in the Professional Disc Golf Association (PDGA). Wolfe is also a pro disc golfer with 66 PDGA career wins under his belt.

"Our first course at UAH was set up by making our targets out of what we had or could find," Wolfe says. "We started out by taking 25-gallon oil drums and cutting a U-shape out of the front of them. Then we put a carpet in the back and the disc would hit the carpet and fall into the oil drum."

That course was set up around the College of Nursing building.

"Several years later we switched out from oil drums to concrete culverts about three feet in diameter, with a cedar post that stuck up out of the middle of it," Wolfe says. "The disc would hit the post and fall into the culvert. We kept that in the ground from 1980 to 1988."

Wolfe held a fundraiser in 1988 to install the chain targets on campus that are still used today.

In 2005, the course was moved to its present location on the south side of campus, and Wolfe says UAH has included the course in its master plan so it will remain on campus in the future.

"They see the value of having it here, and they know it attracts people to UAH," he says.  Today, UAH mows the course but Wolfe still trims it and positions and maintains the targets.

"I do it because I love the sport. If we have to change or replace a target, it comes out of my pocket." In fact, eight targets belong to him personally.

The course hosted the PDGA World Championship in 1983 and again in 1993, as well as being the site for many other major disc golf events. Events hosted at the course have booked as many as 5,000 hotel room nights per event, he says.

"That’s significant revenue for the city," says Wolfe, who travels globally to play professionally. "The UAH course is known throughout the world."

The rocket target located near the Von Braun Research Center is especially famous.  Wolfe constructed it by using two nose cones left from Redstone Arsenal’s U.S. Army MGR-3 Little John missile development program during the mid-1950s. Golfers aiming for that target get the added bonus of a spectacular view of the Saturn 5 at the U.S. Space & Rocket Center in the background.

"That’s well known in the world of disc golf, that that is the only place in the world where you can get that view," Wolfe says. "People will schedule vacations just so they can play here in Huntsville, on the UAH course and on others around town."

Wolfe says he constantly is meeting new people while playing the UAH course and many of them are in Huntsville specifically to do that.

"I go up and visit with people while I’m out on the course, and I will meet people here on vacation to play," he says. "Or I will meet people who are here because they may want to come to UAH as a student, and the golf course is an important factor for them in making their decision to come to UAH. It really is an asset for the campus and the city."