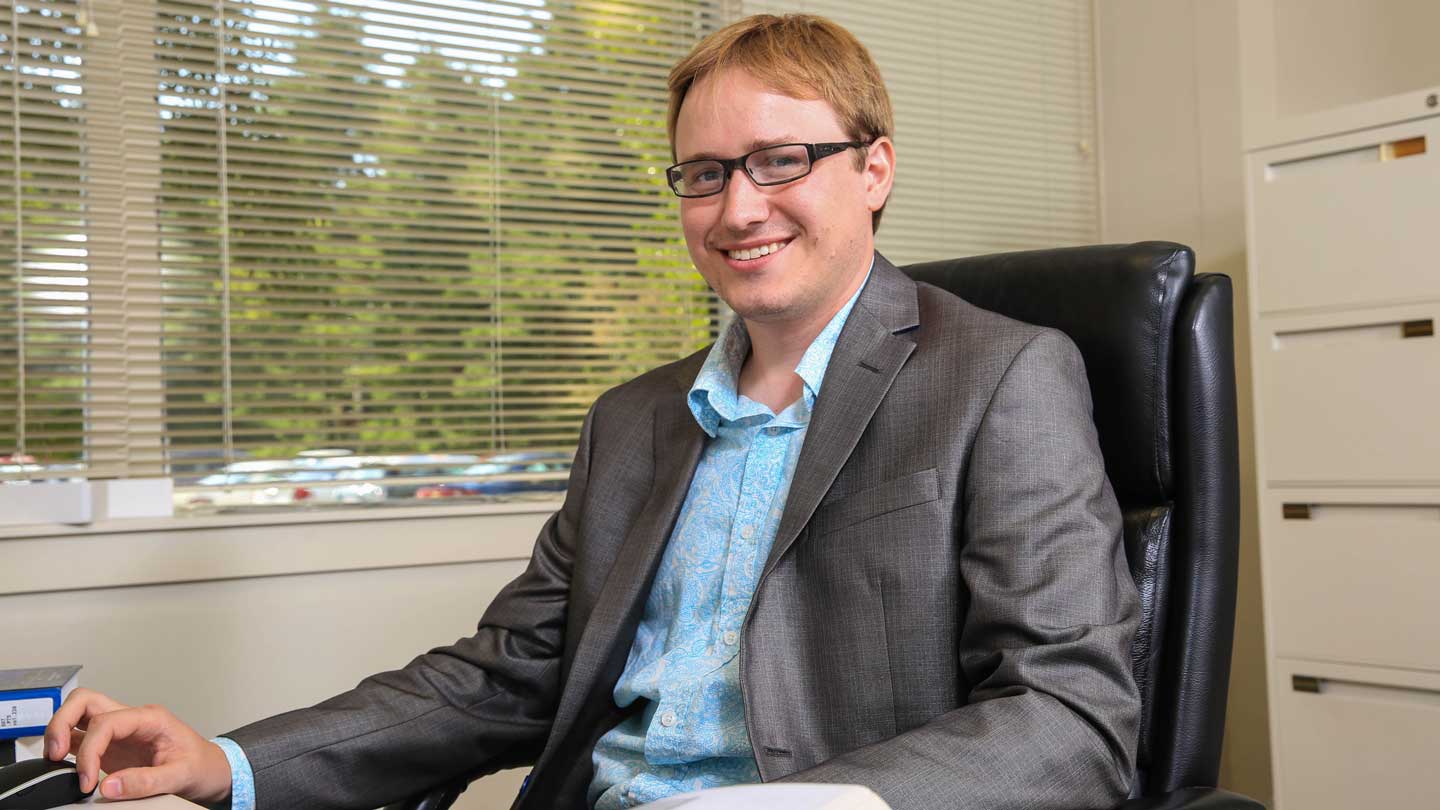 Dr. Bryan Mesmer recently joined the faculty of the College of Engineering and will begin teaching classes in the spring.

After completing his post-doc research on large-scale complex engineered systems at Iowa State University, Dr. Bryan Mesmer knew he wanted to find some place a little warmer where he could settle down and begin teaching. "Iowa last year was -40° in the winter, so that needed to change!" he says with a laugh.

But in the end, the weather wasn't the only thing that drew him to The University of Alabama in Huntsville (UAH), where he recently joined the College of Engineering as an assistant professor in the Department of Industrial and Systems Engineering and Engineering Management (ISEEM).

"UAH is in a city that has so many space and military companies, so the research opportunities related to that was a huge driving force that many cities didn't offer," says Dr. Mesmer. "Another is the people. Everyone here is so friendly and willing to help - not just in the community but also in the department. They genuinely want me to succeed."

While his teaching duties - which include a course on engineering economic analysis - won't begin until the spring semester, Dr. Mesmer is already hard at work building upon the research he began as a doctoral student at the State University of New York at Buffalo.

"For my dissertation, I modeled evacuations of people from an airplane or a building using utility and game theories. I then explored how those end-user models could be used to better design planes and buildings," he says. "Now I'll be moving along with that end-user modeling and looking at what customers actually want when they use a product."

Concurrent with that, Dr. Mesmer will also be researching ways to measure the exergy of the Space Launch System as part of a grant, under the lead of Dr. Phillip Farrington, that the ISEEM department received from NASA. "The work we are performing will provide a unique way of characterizing the system," he says. "This will allow the capacity of the Space Launch System to be explored and expanded in the most effective ways in the future."

If these seem like two very different fields, it's because they are. "I didn't want my focus to be only on one subtopic," he says of his research interests. "I wanted to look at broader systems." As a result, he laughs, "I'm a mechanical engineer who worked as a post-doc in aerospace engineering who now works in an industrial engineering department."

Not surprisingly, Dr. Mesmer's interests outside of the research lab are also engineering-centric. Near the top of the list is gamification, in which games are used in non-game situations to solve problems. "I love video games, so to be able to create cool games and use them to teach people and in my research is the neatest thing to me," he says, adding that he is proficient in C++, MATLAB, Visual Basic, and OpenGL.

But his most favorite thing of all, besides his wife Tara, is his '66 Mustang, which he rebuilt from scratch. "It's my only child right now," he says. It's also a strong connection to his past, as cars were what drew him to engineering in the first place. "My father was a mechanic and so I got a hands-on experience," he says. "I just always really enjoyed it."

Fortunately for his future students, he's also always enjoyed teaching. And now that he's here at UAH, Dr. Mesmer says he can't wait to get started. "I'm excited about getting involved in student activities, learning who my students are, building a strong relationship with them, and getting them set on their research topics," he says. "I will be able to show the students cool things they probably wouldn't get a taste of otherwise."

That he can do it without battling subzero winters? Well, that's just icing on the cake.