HUNTSVILLE, Ala. (April 10, 2103) - A chemical reaction-powered car (ChemCar) developed and produced by students at The University of Alabama in Huntsville (UAH) placed seventh overall among 15 universities present at the Southern AIChE Regional Conference hosted by the University of Kentucky on April 6 in Lexington, Ky. The car won second place in the ChemCar poster competition.

Each year, the UAH student chapter of the American Institute for Chemical Engineers (AIChE) builds a small chemical car for competition. "The goal of this competition is to built and design a ChemCar that can run a distance between zero and 100 feet in under two minutes," said Jose Garcia, who is part of the design and testing portion of the team. "Additionally, the ChemCar needs to be able to pull a weight of water between zero grams to 500 grams. The ChemCar design must be so that the car can fit into a shoebox."

The UAH team calls its car the Chempacitor. The Chempacitor features a proton exchange membrane (PEM) fuel cell that uses the electrical potential created from the reaction between hydrogen and oxygen from the air. A platinum catalyst that is distributed in 10 individual cell plates causes a reaction between these gases.

"The overall effect is to split hydrogen gas into H+ ions and electrons," Garcia said. "The H+ ions are able to move through the membrane, while the electrons left behind create a voltage potential used to create a current in an electrical circuit containing a voltage amplifier and two capacitors."

The power created by the PEM is used to drive an ultra-efficient 24-volt motor that makes the car run. The fuel cell produces between 0.4-0.96 volts per cell, and the only by-product of the reaction is water vapor. 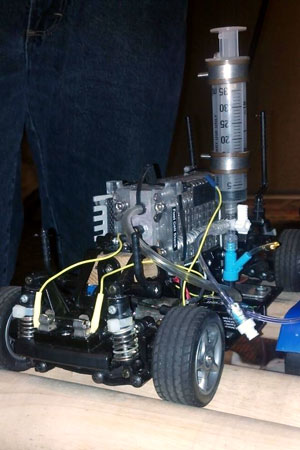 The UAH Chempacitor car, which gets its energy from a proton exchange membrane (PEM) fuel cell. 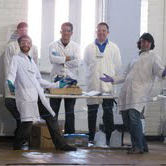 AIChE is the world's largest professional organization representing chemical engineers, with 40,000 members in 93 countries around the globe. The AIChE UAH student chapter is an organization whose goal is to promote scholarship, professionalism and philanthropy, as well as to aid in the dialog between industry and all students in chemical engineering. The main activities the UAH chapter include designing a ChemCar, attending conferences with other AIChE chapters, organizing community service and promoting chemical engineering to prospective UAH students.