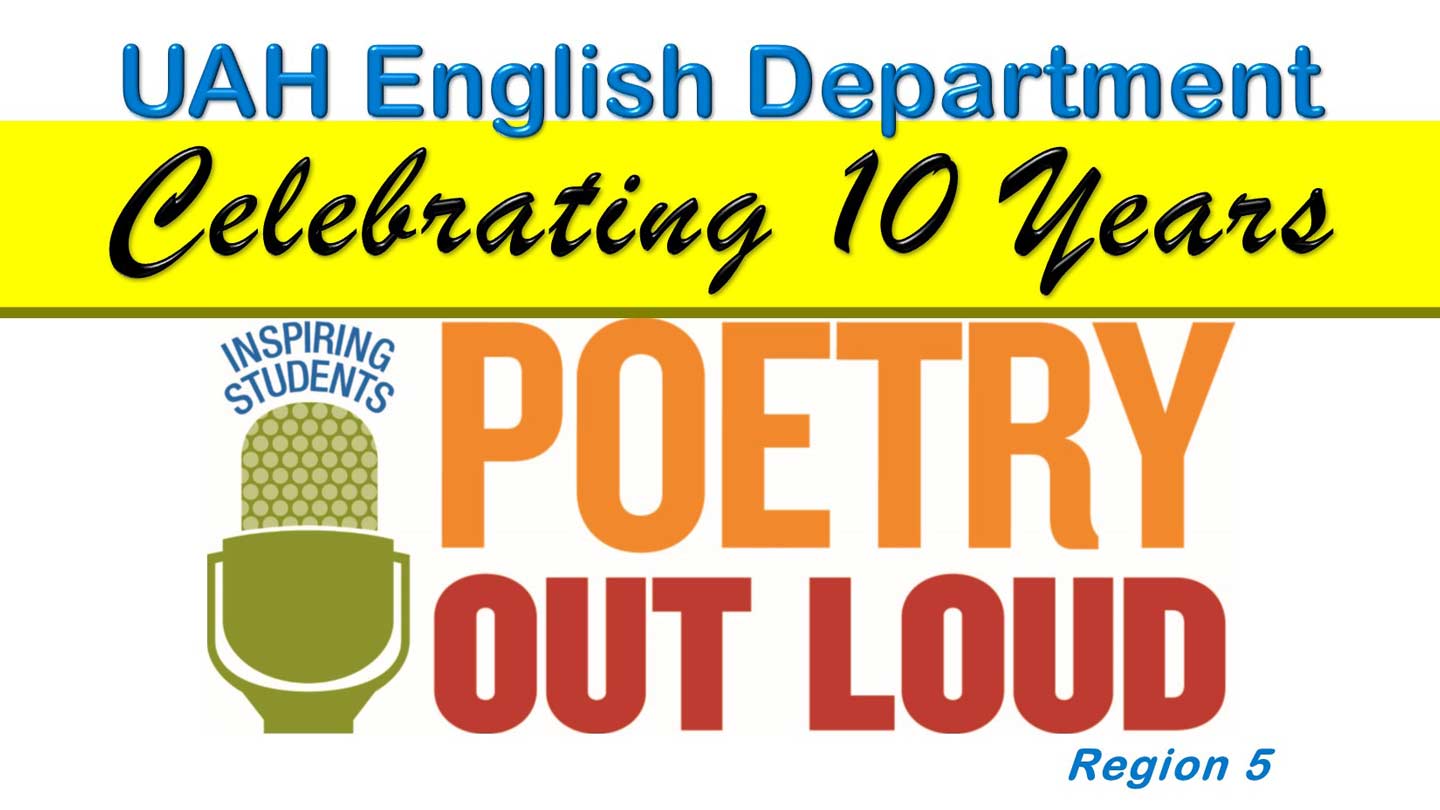 The University of Alabama in Huntsville (UAH) and the Department of English is celebrating 10 years of hosting the Poetry Out Loud competition. Sponsored by the National Endowment for the Arts and the Poetry Foundation and locally by the Huntsville Literary Association, the contest is the nation’s largest youth poetry recitation competition.

"The students who compete year after year blow us away with their creativity and performance talents," said Anna Weber, UAH English lecturer and coordinator for the 13 counties in Alabama’s Region V.

Weber said high school students compete in Poetry Out Loud (POL) contests in their classrooms and schools. Winners proceed to the free workshop "Finding Your Voice," on Friday, Oct. 19, in Wilson Hall room 160 (Art Gallery #14 on campus map). At 1 p.m., the POL anniversary will be celebrated with cake and refreshments. On Friday, Nov. 16, the Region V Competition Semifinals will be held in the Chan Auditorium (#16a on campus map). The UAH Department of English, and the College of Arts Humanities and Social Sciences host all events.

"We are so happy that we can host a competition that allows young people to connect with poetry, which is often thought of as a dying or solely academic art, in a fun, meaningful way," Weber added.

Rose Norman, Professor Emerita of English started the Poetry Out Loud (POL) competition on the UAH campus a decade ago. "I had never heard of POL when a colleague came to my office to see if the UAH English Department might take on Region V," Norman said.

"The combination of poetry and outreach to area high school students was too tempting to resist, though I could tell it was going to be plenty of work. I made sure that the English staff assistants were interested and willing to work on it before I agreed to be regional coordinator. It was largely due to logistical work by Lyndsey Torok and Cynthia Brasher that it has been so successful, let alone lasted ten years," added Norman.

Students who participate in the competition recite works by contemporary poet Jimmy Santiago Baca, that tell of painful life events, Elizabeth Alexander, who composed and read a poem at President Barack Obama’s Presidential Inauguration, and Robert Frost, born in 1874, and considered the greatest American poet of the 20th century.

"We love hosting POL at UAH for many reasons, but especially because UAH is often thought of as a university that is solely focused on Science Technology Engineering and Mathematics (STEM), and that simply isn't true," Weber said. "UAH has many wonderful events that are based in the Liberal Arts and Humanities, and POL certainly is one. New Century High School student, Raina Versa won second place in the national original poetry competition, which is a really big deal," added Weber.

"POL has helped my students discover that small voice that they didn't know was hiding within them, and it has given them the courage to speak it…out loud," said Savage-Owens.