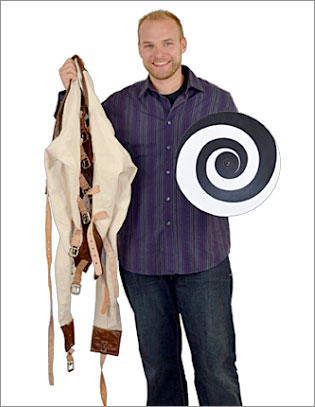 HUNTSVILLE, Ala. (March 24, 2014) — The dangers of irresponsible social media use and the destructive repercussions will be examined during a presentation by Rob Hackenson, Jr., on Monday, April 7, at The University of Alabama in Huntsville (UAH).

Hackenson's edutaining lecture is at 7 p.m., in the Charger Union Theater. The event is free and open to the public. His visit to the UAH campus is sponsored by the Office of Fraternity and Sorority Life.

He specializes in educational entertainment that engages and educates. Hackenson's use of skits, hypnosis, mind magic, illusions, videos, and true stories will have the audience on the edge of their seats, laughing hysterically, or sitting in silence thinking about the important lessons of responsible posting.

At UAH, Hackenson will focus on:

Hackenson practiced the art of magic throughout his youth and received his certification as a hypnotist through the National Guild of Hypnotists. He received his undergraduate degree from Western New England University, and earned his MBA and certificate in advanced organizational leadership from Nichols College. After gaining corporate experience, Hackenson worked as a sales manager for IdeaLaunch and digital marketing manager at Winbrook. A few years ago, he decided to follow his passion to engage, inspire, and educated audiences.

His presentational skills have been featured in The Boston Herald, FOX News, PBS, and Rogers TV Canada. Visit Hackenson at: http://dynamicinfluence.com/