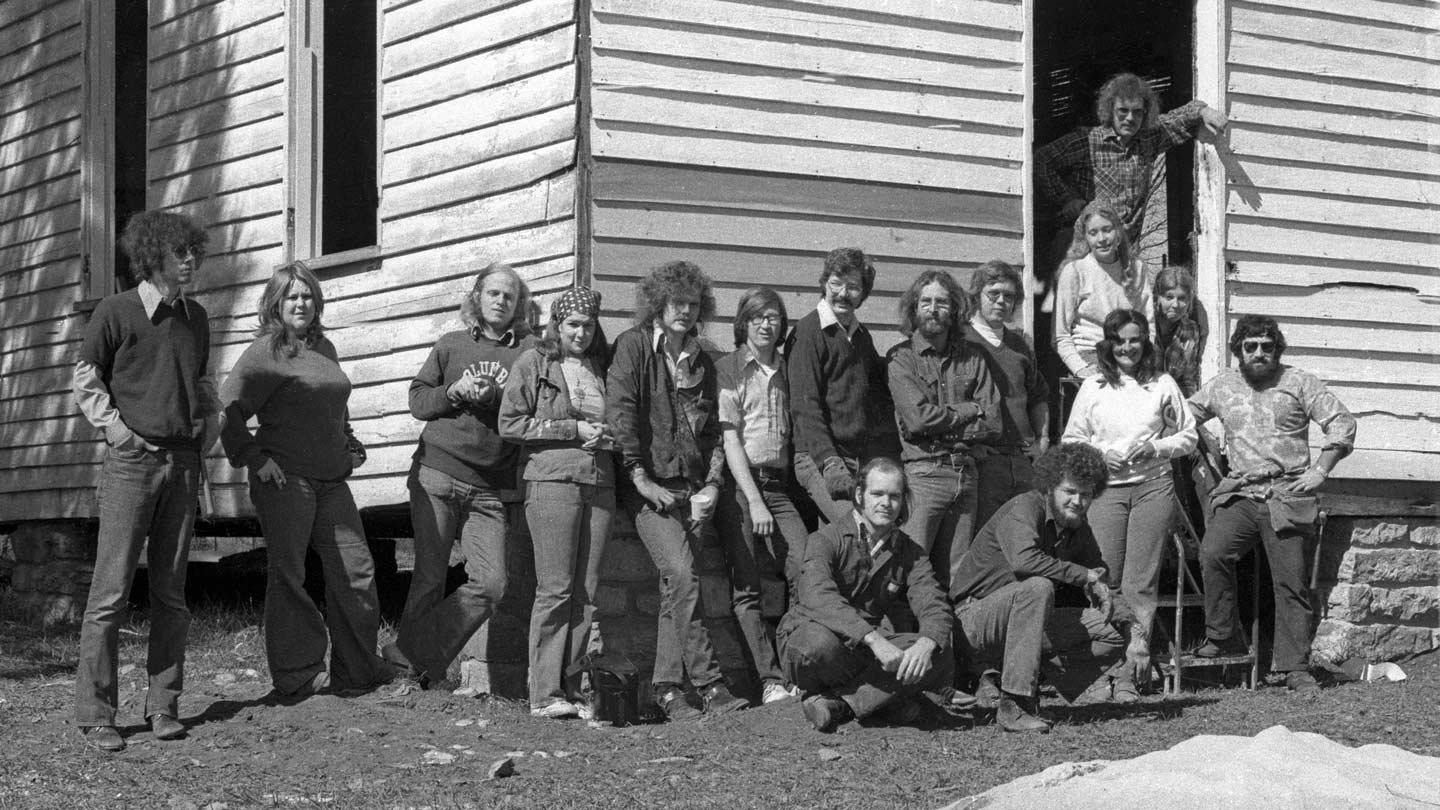 UAH's first class of art students gathered in front of the Union Grove Gallery & Meeting Hall before the building was restored.

Before social movements were created and spread globally by the Internet, art was the catalyst that rocked the world.

Between 1966 and 1976 the nation—indeed the world experienced major social movements including Civil Rights, Anti-War (Vietnam), and Women’s Liberation were all captured by paintings, drawings, photography and sculpture. Recognizing the powerful imagery of art during these two historical decades, The University of Alabama in Huntsville (UAH) will host an art exhibit and reunion honoring the university’s first class of art students.

"This reunion honoring our art students from 1966 to 1976 has been two years in the making," said José A. Betancourt, Exhibit Curator and UAH Associate Professor of Art and Art History. In 2016, Betancourt decided to "do a thorough cleaning" of the Union Grove Art Gallery and Meeting Hall, and found photos and several pieces of art from the 60s and 1970s.

According to Betancourt, the idea was formed then to honor the early art students and professors. "It’s hard to believe, but I have found over 30 students from those years — all still producing art and many in Huntsville."

The new exhibit "UAH Art: The First 10 Years—1966—1976," will be on display for public viewing from Tuesday, Aug. 21 to Friday, Sept. 21, at the Union Grove Art Gallery (uah.edu/map). Pieces displayed in the exhibit include paintings, drawings, sculpture, photography and New Media works.

The Opening Reception for the exhibit is Saturday, Aug. 25, from 5 p.m. to 8 p.m., at the Union Grove Art Gallery. The event is free and open to the public. Some of the art on display will be available for purchase.

“The show highlights the recent work of 33 former UAH art students from the first years of the art department,” said Betancourt. “All students were part of the first Humanities program and are still practicing artists.” Betancourt noted too, that the creation of the Humanities program at UAH, was based on a recommendation by Dr. Werner von Braun, the father of rocket science in the United States.

"Education must prevent people from becoming robots, and young people must acquire the moral and spiritual values adequate to decide wisely the uses which should be made of new knowledge with their minds not fashioned to function as computers, but with heart and soul," said Von Braun during a 1961 speech.

In addition to the exhibit, Betancourt said the reunion would also serve as a tribute to the founders of the UAH Art Program, professors Jack Dempsey, Jeffrey Bayer and Richard Pope.

The UAH art department was started in 1965 and formed a strong foundation with studies in painting, sculpture, graphic design, and art history.

“The first art professor to come along was Jack Dempsey," said Betancourt. “Dempsey was hired to build the department from the ground up. He later hired his friend from Louisville, KY, Dick Pope, who established the graphics discipline. At the time, Humanities was gathering its first professors, who would set the tone for years to come. The program brought a cultural component to the university, but also extended to the local community. It was around this time, when the Huntsville Museum of Art was formed."

Betancourt said after Richard Pope joined the Art department, Mike Price briefly taught sculpture while serving in the Army and stationed in Huntsville. The first full-time sculpture professor and the man who helped bring the Union Grove Gallery to UAH was Jeffrey Bayer.

"These first professors gave the students the opportunity to experience art like never before," said Betancourt. "Dempsey was a classically trained painter with a great knowledge of contemporary art practices. Tearing down conventional ways of thinking was one of his talents as well. Dempsey’s open teaching style brought many local students to UAH. Some were enrolled in classes, while others attended community-drawing classes. These students all formed strong bonds by being the firsts in their field," he added.

Betancourt said although the first students began attending the UAH Art Program more than 50 years ago, they came from diverse backgrounds. “The students were an interesting variety of local, international and military families, most living on the Redstone Arsenal. Bernd Billmayer ('71, BA,) and Marlies Holl (’75-’78), German immigrants are alumni of UAH."

The Union Grove Gallery was gifted to the university in 1974. Sculptor and professor Jeff Bayer and local architect/historical preservationist, Harvie P. Jones, convinced the UAH administration to bring to campus an old church building to be used as an art gallery.

"The structure was restored with the help of many of the first art students. Bayer and his students started the first Union Grove Gallery makeover in the 70s. The building was a gift from the Bendall family of the Hazel Green area," Betancourt added.

The small Greek Revival-style wooden structure was originally built as a chapel sometime between 1820 and 1850. Betancourt said the building was partly dismantled when moved from Hazel Green to the UAH campus. A subsequent renovation of the building took place in 1998.

"Many of these UAH students went off to become successful artists and returned to their Huntsville roots," Betancourt said. "They continue to enrich our art culture by being active artists in the North Alabama community…sharing what they learned from the outstanding early professors of UAH."