HUNTSVILLE, Ala. (April 16, 2013) - The University of Alabama in Huntsville (UAH) and the Army's Unmanned Aircraft Systems Project Management Office (PM UAS) will explore opportunities for collaboration to promote the development of the next generation of unmanned aircraft systems.

The agreement is intended to further the education of future American engineers, scientists and other professionals. PM UAS and UAH will work together to explore opportunities to support the development of courses at the graduate and undergraduate level as well as research in the field of unmanned aircraft.

"Education and research into unmanned aerial systems is quickly emerging as a critical discipline for this university and the U.S. Army agencies at Redstone Arsenal," said UAH President Robert Altenkirch. "Our diligence in this field is just one of the many ways our faculty and students are able to support our partners in the greater Huntsville area. While the military benefits are obvious, we are also seeing an increasing interest among the nation's law enforcement forces and first responders as well." 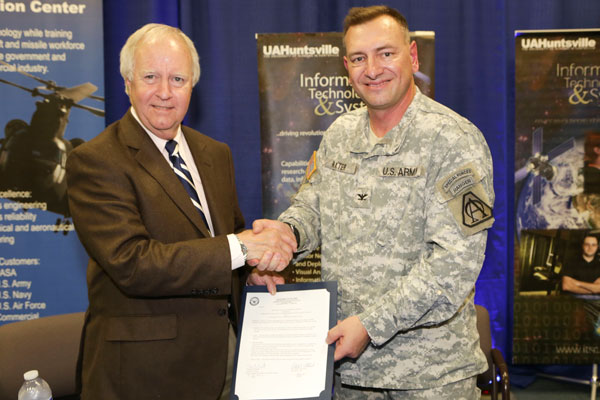 "Universities see unmanned aircraft technologies as the way of the future and we are seeing more and more schools stand up programs for the research and development of unmanned systems," said Col. Baxter, PM UAS project manager. "This effort will allow the Army to further promote independent research and development at the university level and develop student interest in the Army's UAS program. Ultimately, UAH, the Army and the students themselves will benefit from the student work."

Under Acting Director Sue O'Brien, RSESC has a unique skill set for a university research center in that its expertise applies to the engineering design, analysis, fabrication, integration, and flight testing of a wide variety of vehicles, including aircraft, rotorcraft, satellites, and spacecraft. RSESC has a multi-disciplined engineering staff, currently employing over 35 engineering students to support research and test efforts.

RSESC just recently completed the development and flight certification of a UAS trainer for the AH-64 Apache. RSESC personnel have decades of experience in the engineering processes required to achieve airworthiness and/or flight worthiness certification. RSESC is currently working with the Army to improve the procedures used to handle crash damaged aircraft, including the UAS Gray Eagle. RSESC is also leading a team of commercial companies and universities to compete nationally for one of the Federal Aviation Administration's UAS Test Sites.

SMAP is researching employment of micro-Unmanned Aerial Vehicles for low-cost surveillance by using remotely controlled helicopters with funding from the U.S. Army's Aviation and Missile Research and Development Center (AMRDEC). Directed by Dr. Gary Maddux, SMAP is the largest of the university's 15 research centers and institutions.