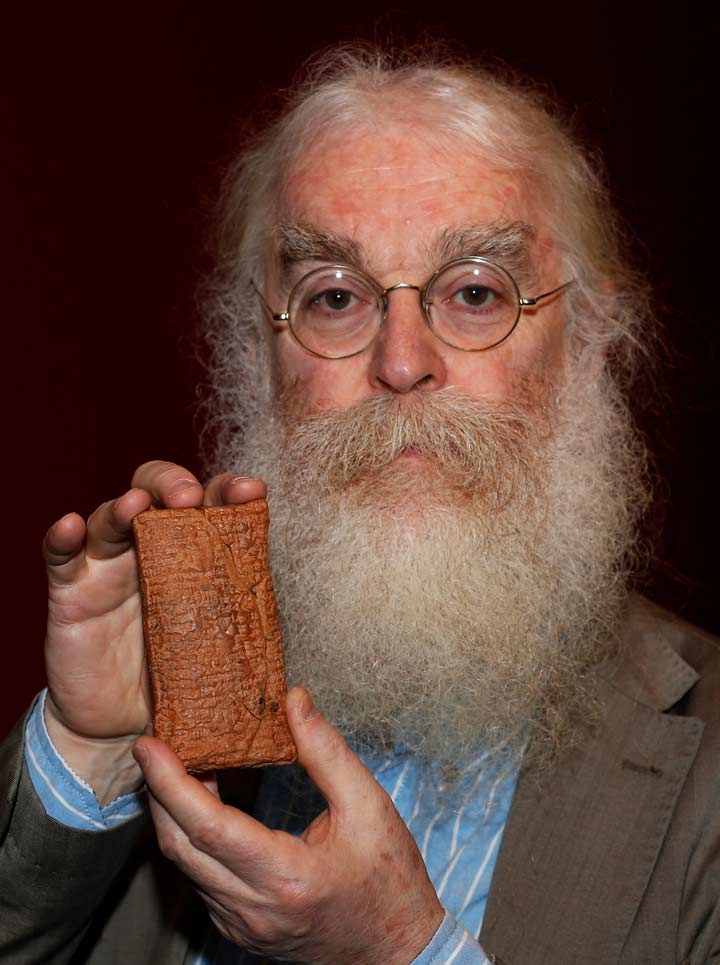 British Museum expert Dr. Irving Finkel holds the 4,000-year-old Babylonian cuneiform tablet that serves as the subject of his lecture on March 23.

The University of Alabama in Huntsville (UAH) and the North Alabama Society of the Archaeological Institute of America are pleased to host Dr. Irving Finkel, assistant keeper of the Department of the Middle East at the British Museum, for a series of public talks on the UAH campus.

The principal presentation, entitled "The Ark before Noah," will take place at 7:30 p.m. on Thursday, March 23, in the Chan Auditorium of the Business Administration Building. It will center on a 4,000-year-old Babylonian cuneiform tablet that was brought in to the British Museum by a member of the public in 2008. Dr. Finkel will describe how, upon discovering that the tablet was actually a copy of the Babylonian Story of the Flood, he was able to decode it in ways that offered unanticipated revelations. He will also detail how a replica of the boat, following the ancient instructions, was built in India – a feat that now serves as the subject of the documentary film The Real Noah’s Ark.

Bookending the "The Ark before Noah" will be two additional presentations on the UAH campus. The first, "Gaming BC: Reconstructing Ancient Games," will take place earlier in the day, at 12:45 p.m. on Thursday, March 23, in Wilson Hall, room 168. The second, "Surrounded by Wonders: Stories of a British Museum Curator," will take place the following morning, at 9 a.m. on Friday, March 24, in Wilson Theatre.

All three presentations are free and open to the public.

A cuneiform tablet curator since 1979, Dr. Finkel holds degrees from the University of Birmingham and is especially interested in ancient magic and medicine, all aspects of ancient cuneiform literature, and the history of the world’s board games. His most recent book, The Ark before Noah: Decoding the Story of the Flood, was published in 2014.