Upper winds Saturday, March 30, carried the payloads from BalloonSats launched from 10-11 a.m. by The University of Alabama in Huntsville's EE494 Senior Projects Class 122 miles away into Georgia near the town of Calhoun.

Payload chasers tracked the courses of the 57th, 58th and 59th BalloonSats launched by UAHuntsville senior design classes. One of the payloads landed on the ground near a new home under construction and was sighted by some of the workers on the site. Another was found in a tall tree behind a residential area, and the third rested in a very tall tree near a road and power lines.

The first and second payloads were recovered but the third is still in the top of the 70-foot pine. An initial attempt to retrieve it was not successful. Another attempt is planned. 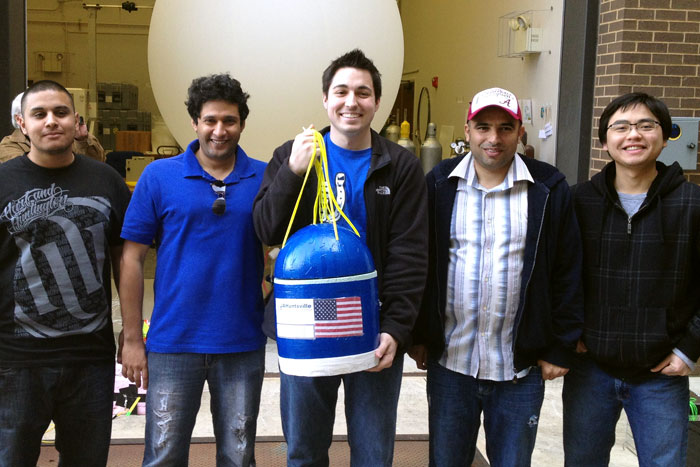 Members of the FiveStar team with their balloon and payload prelaunch.

Volunteers who provided assistance with balloon tracking and payload recovery were Jason Winningham, who built new tracking packages; Bill Brown, who lent a couple of back-up trackers and his balloon launch services; Don Robinson, who found the first two payloads; Gary Dion, who co-piloted a chase vehicle; Shane Wilson, who ascended a tree and retrieved a payload; and Wes Cantrell, who inflated the balloons.