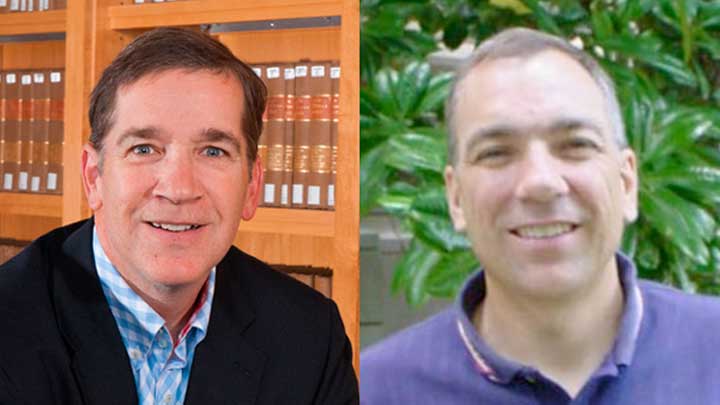 Dr. Brian Bornstein and Dr. Scott Gronlund, experts in the fields of psychology and law.

Dr. Brian Bornstein and Dr. Scott Gronlund, experts in the fields of psychology and law will give a public seminar on eyewitness identification myths, on Thursday, Nov. 6, at The University of Alabama in Huntsville (UAH).

The seminar "Eyewitness Memory Myths and The Costs and Benefits of Identification Reform," will begin at 7 p.m., in Wilson Hall (room 163). The event is sponsored by the UAH Department of Psychology, and is free and open to the public.

Dr. Brian Bornstein is professor of Psychology and professor of Law at The University of Nebraska-Lincoln (UNL). His UAH talk is entitled "Eyewitness Memory Myths." Borstein's address will cover popular beliefs about eyewitnesses, drawing largely from several surveys that have been done on different populations, such as laypeople, memory experts, and legal professionals. Connections will be made to how eyewitnesses are portrayed in the popular media, as well as the implications for trials featuring eyewitness testimony.

Bornstein's research efforts focus primarily on how juries, especially in civil cases, make decisions, and the reliability of eyewitness memory. He also directs the Jury, Justice and Eyewitness Research Group at UNL. His latest books are The Handbook of Trial Consulting and Trauma, Stress and Wellbeing in the Legal System. He is co-editor of the journal Psychology, Crime & Law, the NYU Press Psychology & Crime book series, and the Springer Advances in Psychology & Law book series.

Dr. Scott Gronlund is the Roger and Sherry Teigen Presidential Professor and Professor of Psychology at the University of Oklahoma. His UAH lecture is entitled "Costs and Benefits of Eyewitness ID Reforms." Gronlund's talk will consider the current focus in the American criminal justice system on protecting the innocent, which has obvious benefits but has led us to reforms that have ignored or downplayed the costs of reduced correct identifications. Public policy needs to consider both the costs and benefits of proposed reforms, and specific examples of reforms will be presented to illustrate this approach.

Gronlund's article in collaboration with Dr. Jeffrey S. Neuschatz, professor and chair of the UAH Department of Psychology, Showups versus Lineups: An Evaluation Using ROC Analysis recently appeared in The Journal of Applied Research in Memory and Cognition. Gronlund also published Reform of Eyewitness Identification Procedures in APA Publications.

Gronlund received his undergraduate degree at The University of California Irvine, and earned a PhD from Indiana University.

For more information about the eyewitness identification seminar at UAH, please Email: jeffrey.neuschatz@uah.edu.