Sodexo shares key ingredients in its recipe for success at UAH 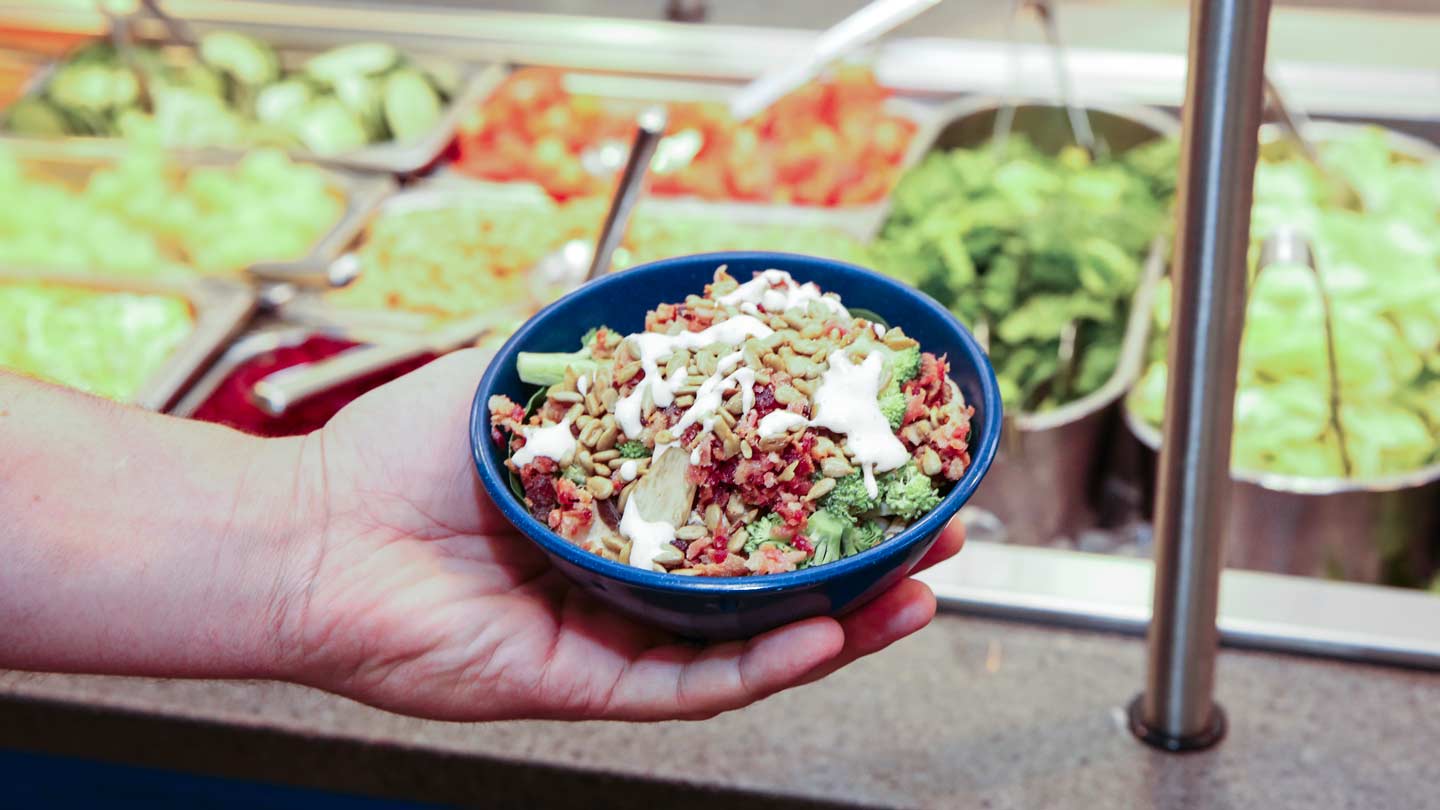 With 14 dining options to choose from at The University of Alabama in Huntsville (UAH), it can be tough for students to settle on a favorite. One thing that they can agree on, however, is that the quality of the food and the customer service that Sodexo provides is top notch. In fact, the company recently received a 94 percent customer satisfaction rating from UAH's student body - a score that puts them among the top 3 percent of the 952 university campuses they serve across the nation.

"Each semester we distribute a survey to the students and ask them to tell us things like where they dined the most often, what some of their favorite dishes were, and whether they feel like they got the best value for their money," says Meagan Owens, Sodexo's marketing manager and a UAH alumna. "We usually score very high in terms of meeting their expectations. Last year were at an 89 percent customer satisfaction rating, so this year's was an increase over that!"

Things have come a long way since she first arrived at UAH as a freshman in the fall of 2009. "When I started, we only had Charger Café and Charger Brew, and students weren't required to be on a meal plan," says Owens, who joined Sodexo in the summer of 2014. "So it's been exciting as an alumna and an employee to see it grow so quickly to 14 locations without sacrificing customer satisfaction." Indeed, at Charger Café alone, Sodexo now serves 150 students for breakfast, 600 students for lunch, and 500 students for dinner on a daily basis.

But just what accounts for Sodexo's stellar reputation? Like any recipe for success, there are a few key ingredients:

An assortment of options…

UAH's eateries include a mix of signature campus locations, like the Charger Café, Blue's Tech Hall, and the Garden View Café, and retail favorites like Papa John's, Chik-fil-A, Starbucks, Dunkin' Donuts, Sandella's, and World of Wings. "We've also just added the Fitness Café at the University Fitness Center, which offers coffee, smoothies, and all of our Simple To-Go products," says Owens. "And in the fall of 2018, we hope to add either a Mexican or a Chinese dining option on campus." 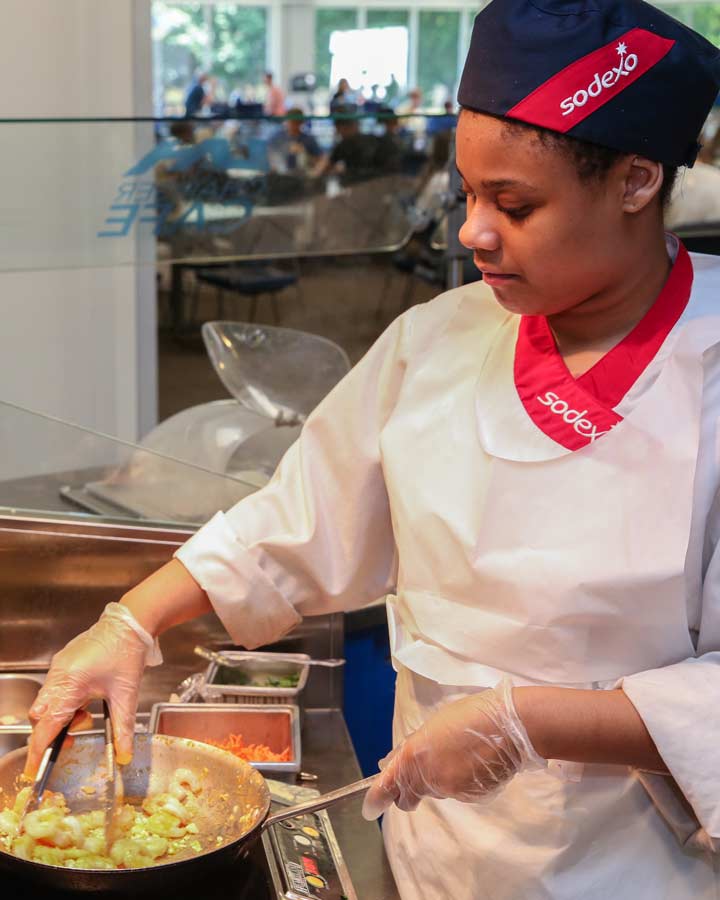 The Charger Café’s omelet station is a popular mealtime destination.

"Freshness," says Owens, "is something Sodexo takes great pride in. The quality of the food is the most important thing." To that end, many ingredients are locally sourced and all dishes are prepared from scratch on a daily basis. The company also makes sure to take dietary needs into account, offering vegan, vegetarian and gluten-free options and a range of low-calorie meals as part of their Mindful Offerings menu. "We've worked with Sodexo's executive chefs to come up with these recipes, which use healthier ingredients but don't sacrifice the flavor," she says. "And our nutrition database is connected to the MyFitnessPal app, so that diners can scan the item's bar code and find out the nutritional value."

A serving of fan favorites…

Fried Chicken Wednesday. Catfish "Fryday." Sushi Night. These traditional UAH meals are what keep students coming back for more. "Fried Chicken Wednesday started by student request and then turned into a weekly tradition due to its popularity," says Owens, who credits "Miss Connie's original recipe" for the dish's success. "We have been doing it for about seven years now, and it even has its own hashtag - #FCW!"

Just as popular are the event meals that Sodexo hosts each semester, such as Late-Night Breakfast, a full breakfast buffet held before the start of exam week and served by the university's president and staff. And last year, they introduced "We Love Our Chargers," a student-appreciation dinner to coincide with Valentine's. "We had steak and shrimp and a chocolate fountain," she says. "Now we plan to do it once a semester to let our students know that we appreciate them all the time."

Once a month, Sodexo managers meet with student representatives from UAH's Student Government Association, registered student organizations, and housing. "These students bring us any complaints, compliments, or suggestions that they hear from the student body," says Owens. "If a student says they love Miss Kay's sushi, we share that with her. If a student says there's a delay in service time, we get with our team to break down the problem and then follow up with the outcome at our next meeting. It's an outlet for their voices to be heard."

Students can also share their feedback via Sodexo's comment boxes, which are placed at various locations across campus and checked daily. "Whether it's a rant or a rave, this ensures we're always on top of any situation," she says. "We want to make sure we're addressing students' concerns, and if they leave their email, we can follow up with them personally to resolve it."

And service with a smile…

Owens describes the Sodexo team as a family - and part of that family, she says, is the students. That means everyone from the company's managers to the those on the front line are invested in making sure they have an experience that reflects the one they grew up with. "Many workers take the initiative to show that it's about more than just food on a plate," she says. "They greet the students with a smile and make sure they're eating the right meals."

Some, like Miss Shirley, have even become famous by campus standards. "We have so many compliment cards that say 'Miss Shirley helped me get through this week,' because she's considered their second mom," she says. "And having a person like that, who knows their name and makes sure they're having a great meal and a great day, is like a home away from home."


But while most companies would take comfort in having the right ingredients for success, Sodexo isn't like most companies. And at UAH, they don't plan on resting until they've perfected the recipe. "I think it's affirming to know that what we're doing is reaching the students and that they're happy with the results," says Owens. "But we want to do the best we can do!"