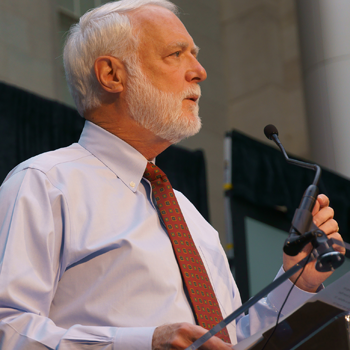 HUNTSVILLE, Ala. (December 3, 2012) — Wayne Clough, the 12th Secretary of the Smithsonian Institution will address the 2012 graduates of The University of Alabama in Huntsville (UAHuntsville) on Saturday, December 15, at 10 a.m., in Propst Arena, Von Braun Center.

Clough is working to expand the Smithsonian’s global relevance and help the nation shape its future through research, education, and scientific discovery. To ensure the Smithsonian’s vast collection is accessible and available, he is leading the effort to digitize much of it’s 137 million objects in the collection and use the World Wide Web and Smithsonian experts and scholars to reach out to new audiences in the United States and around the world.

He was elected to the American Academy of Arts and Sciences in 2010 and serves on its Commission on the Humanities and Social Science. In 2009, Clough was inducted into the Technology Hall of Fame of Georgia and received the Joseph M. Pettit Alumni Distinguished Service Award that recognizes a lifetime of leadership, achievement, and service to Georgia Tech (GIT).