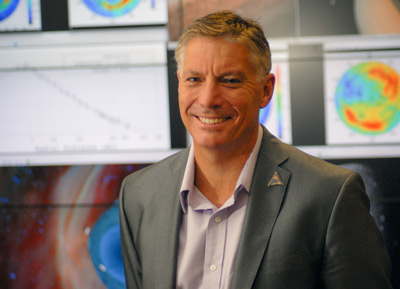 HUNTSVILLE, Ala. (Oct. 16, 2013) - Doctoral candidates should be graduating from the newly formed Department of Space Science at The University of Alabama in Huntsville (UAH) in fall 2014, said its chairman, Dr. Gary Zank.

Those doctoral graduates will have been "grandfathered" into the new department because their faculty advisors have moved into the department themselves. Formed within the College of Science, the Department of Space Science drew its initial faculty from a faculty cluster in space physics formerly housed in the Department of Physics. This group of scientists also conducts research through the Center for Space Plasma and Aeronomic Research (CSPAR).

CSPAR and the Space Science faculty of the new department have a world-class reputation in theoretical and computational space physics, including space weather modeling, interplanetary and heliospheric physics, and have received approximately $18 million since July 2008 in grants to support these specific activities.

Initially, the Department of Space Science will focus on graduate-level studies only. The department is developing a graduate program in Space Science in collaboration with NASA's Marshall Space Flight Center (MSFC) and CSPAR personnel. "All of the primary groundwork is in place for the department, and we are now building the graduate program" for a 2014 launch, Dr. Zank said.

Created at the request of UAH President Dr. Robert Altenkirch by the University of Alabama Board of Trustees, the new department joins together strengths in space science that UAH shares with MSFC employees who are already working in Cramer Hall on the university's campus.

"There is a close collaboration between UAH faculty and researchers and the MSFC solar physics group," Altenkirch said. "We envision an even greater role for our Department of Space Science as we continue to expand and enhance the university's academic and research capabilities in these areas."

The new Department of Space Science will have a strong working relationship with the UAH's CSPAR and its creation will birth a joint UAH-MSFC graduate space program.

"That will give us quite a unique program in the nation," Dr. Zank said. "You will have eight Department of Space Science faculty who are working closely together with CSPAR and Marshall Space Flight Center, so you're looking at a student having the possibility of being able to choose to work with perhaps 80 to 100 PhD-level scientists in their studies."

There is a close collaboration between UAH faculty and researchers and the MSFC solar physics group. We envision an even greater role for our Department of Space Science as we continue to expand and enhance the university’s academic and research capabilities in these areas.

That makes for "a very exciting and dynamic atmosphere for the students," Dr. Zank said, with the opportunity to work with top heliophysics researchers employed by UAH and MSFC. "As a result of this, the opportunities for students become almost unmatched in a relatively benign and inexpensive environment," he said.

"I think that the first goal is to become nationally ranked in the top 20 departments of this type," Dr. Zank said. "We can probably achieve that goal in a three- to five-year period."

During analysis of the proposed department, Dr. Zank said comparisons were drawn between UAH and New Mexico State, a university that is in many respects ranked similarly nationally to UAH. New Mexico State's astronomy department is ranked 19th nationally by the National Research Council.

"The step we next would take, to go from the top 20 to the top 10, would probably be a 10-year goal," he said. "In order to do that, one thing we'd have to do is increase our faculty numbers by probably half again or more."

The primary goal for the immediate future is to fully integrate the MSFC scientists into the educational process so that they become mentors and have greater interaction and supervision of the students, Dr. Zank said.

"We want to make it more than an adjunct position," Dr. Zank said. "We want to take advantage of the close ties the university has built up with Marshall Space Flight Center."

The developments will unlock new potential at Cramer Hall. From the upper Earth atmosphere and the environment surrounding our home planet, scientific discovery at UAH will extend to the sun and its atmosphere, and beyond to the heliosphere and into interstellar space including the most distant observable objects, he said.

"This whole building becomes a center of discovery," Dr. Zank said. "And it's all in this one building, and that's a great place for the student."