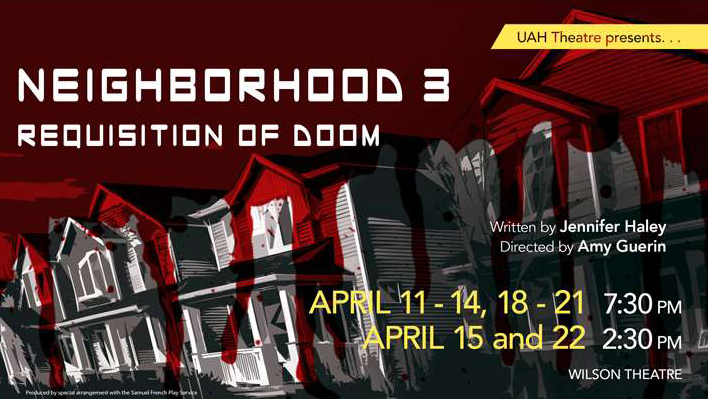 UAH Theatre concludes its 2017-2018 season with "Neighborhood 3: Requisition of Doom" by Jennifer Haley.

Debuting at the 2008 Humana Festival for New American Plays, "Neighborhood 3" is about a neighborhood very much like your own where a group of teenagers very much like you are obsessed with the latest zombie video game. Kept safe and secure by their parents who give them everything they need, the teenagers use the game as a form of escape from their mundane lives. What no one knows is that the video game is crossing over into real life and there’s no way to stop it. In this game, fear has a life of its own.

The winner of the 2012 Susan Smith Blackburn Prize, awarded annually to an outstanding female playwright, for her play about virtual reality, "The Nether," Haley specializes in how technology intersects and interacts with our daily reality – usually with negative results.

"Neighborhood 3" is directed by Assistant Professor Amy Guerin. According to Guerin, "This play is an awesome challenge. We have an ensemble of 17 actors, a collaboration with the Animation Department to build sections of the game, and original sound design scoring the show. ‘Neighborhood 3’ is edge of your seat scary, darkly funny and incredibly relatable to young people coming out from under the thumb of their parents, and to parents who just want the best for their children."