Music a complement to any field of study 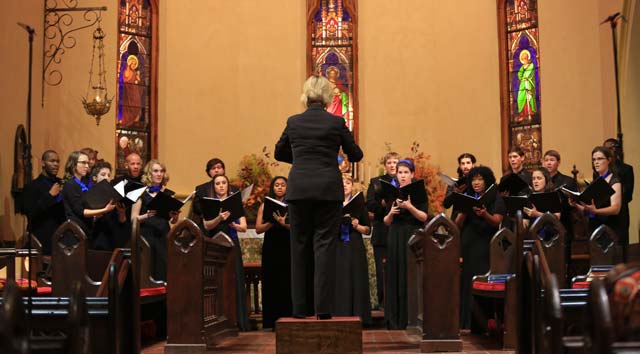 As one of less than 100 public universities classified by Carnegie Foundation as a very high research institution, The University of Alabama in Huntsville (UAH) has its fair share of students pursuing a degree in the STEM fields. But a surprising number of them are supplementing their education with a more creative pursuit: music.

Why music? Well, for one thing, it has a way of lifting the spirits that many other areas of study just can't compete with. Just ask UAH Choir member and accounting major Iya Newsome. "Without music I don't know what I would do because it relates to my everyday life and make me feel better as a person," she says. "It helps me clear my mind and gives me a boost when I'm feeling down."

"Music is a joy," adds fellow choir member Dean Gillmore, who recently earned a bachelor's degree in mechanical engineering and who is now working on a master's degree in the same field. "There is a feeling when you can get past just singing the right notes and get to the expression that comes not just from the composer but from the people around you."

Without music I don't know what I would do because it relates to my everyday life and makes me feel better as a person.

It can also provide an escape from the daily grind. That was certainly the case for UAH alumnus and computer engineering major Jiake Liu. "Playing in the ensembles every afternoon was always the highlight of the day," he says. "For that little time we had I could forget all the worries in the world and just concentrate on the sheet music in front of me and listening to the music we create together."

But whatever their personal motivation, there's no doubt that these students are benefiting greatly from the experience. In study after study, research has shown that there is a strong correlation between music participation and academic success, including higher attendance and graduation rates to increased grade point averages.

"Music utilizes both sides of the brain, so it's no secret that it is attractive to scientists and engineers both as a listener and a participant in musical events," says Dr. Erin Colwitz, assistant professor of music and UAH's Director of Choirs. "With that in mind, we can use music to bring us all together as human beings. It becomes our common language."

And that's not all. Music also offers a new way of seeing the world, points out choir member and accounting major Adam Neely. "By being in choir, members learn something unique that expands their mind in a less conventional way than most academic subjects by requiring them to use both sides of their brain," he says. "This encourages success in all other classes as well."

In Liu's case, music participation even laid the groundwork for his current success as co-founder and CEO of a high-tech business. "There's no doubt that the stage performances helped me a lot in preparing for pitching investors, speaking in front of my team, and presenting at events, which are essential parts of building a startup," he says.

That said, it seems reasonable to conclude that if some music participation is good, more is better. But that's not necessarily the case. "It becomes so much more difficult to enjoy something when you start to think of it as a chore," says Gillmore. "Every time I sit down to mess about with a piano or attend a rehearsal or a concert I want it to be because I want to be there, because I love being there."

As a result, he and his peers can all say without hesitation that music will continue to be a part of their lives long after they've gone on to a career in the STEM fields. "Joining a local band and playing my saxophone regularly is definitely on the agenda," says Liu. "It's a lifelong hobby that transcends languages and cultures."