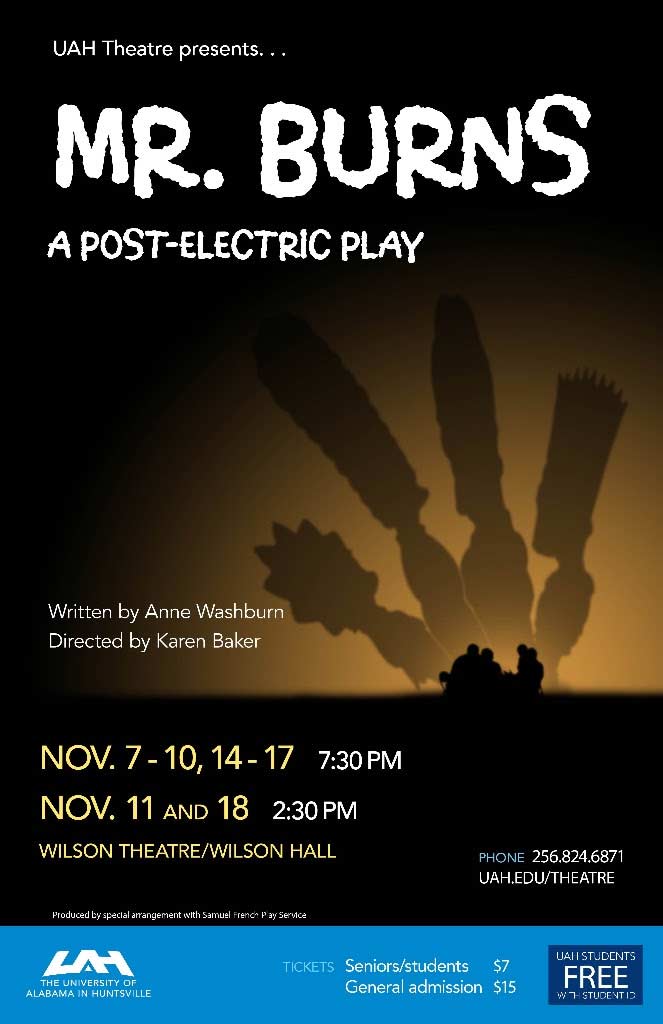 UAH Theatre continues its 2018-2019 season with "Mr. Burns, a post-electric play," a contemporary mash-up of "The Simpsons," the apocalypse and early 21st century popular culture.

Written by Guggenheim Creative Arts fellow Anne Washburn, "Mr. Burns" takes place in the near future after an apocalyptic-level nuclear event. Survivors gather for safety and companionship, and around their campfire start sharing their favorite stories, including the classic "The Simpsons" episode "Cape Feare," itself a parody of the original movie thriller. As time goes on, we see how this one story becomes a touchstone and creation myth for future generations as they seek to understand and contextualize their past.

Featuring a cast of 18, including a full band on playing on recycled materials instruments (as befits a post-apocalyptic band, of course), over three acts of increasingly mashed up storytelling, "Mr. Burns, a post-electric play" will challenge and surprise audiences with its creativity and innovation. Directed by Karen Baker, the script instantly drew her in.

"I wanted to explore people's need to tell stories. Every civilization has a tradition of storytelling, whether to teach or entertain," Baker says. "I think the audience will enjoy the connection to ‘The Simpsons’ because of all the pop culture and historical references. ‘The Simpsons’ has been on television for 30 seasons. Even if you didn't watch the show, the characters are recognizable."