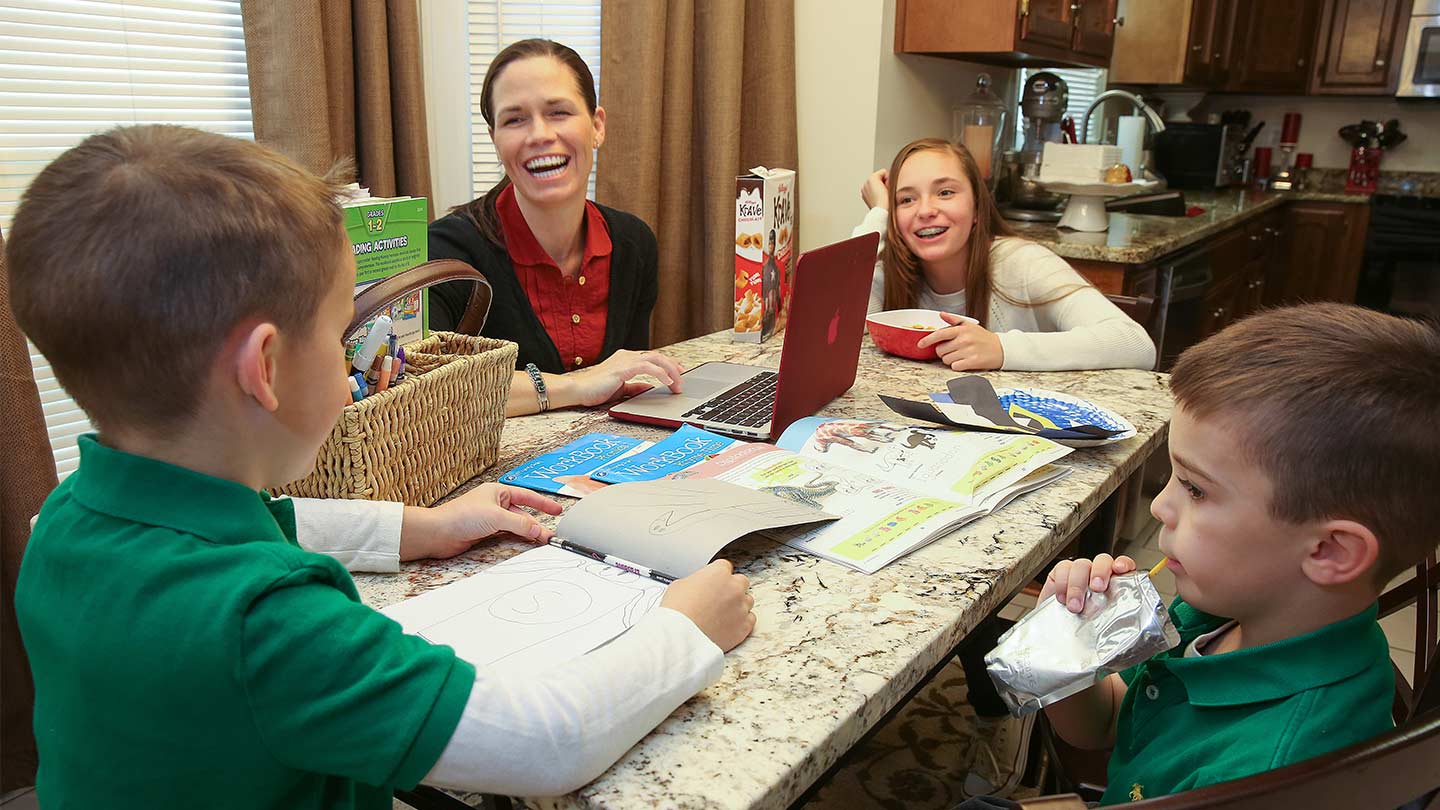 Gibson spends some time around the table with her children, Drew (4), Shaffer (6), and Kennedy (11) after they got home from school. Gibson will be receiving her Masters in English from UAH this December.

In the last 13 years, Theresa, "Trace" Gibson, has lived in 10 different houses—from Arizona, to Virginia, to Hawaii. The UAH student will graduate on Sunday, Dec. 13, from the College of Education with a master's degree. A military wife and the mother of three young children, Trace Gibson gives new meaning to the phrase "multi-tasking."

The Gibson family moved to Madison County nearly three years ago. "I had to postpone completing my master’s degree until recently because of all our military moves," Gibson explains. While her story is unique, this circumstance of returning to school later in life has become commonplace across the nation. Gibson's husband, Adam, is currently serving a tour of duty in the Middle East, near Saudi Arabia, and for now, she is a single parent to Kennedy 11, Schaffer 6, and Drew 4.

Gibson, a SOTA (student over the traditional age), chose UAH because the school was "close by and had a great reputation." She enrolled in the university's fifth-year graduate program as an English major with secondary education certification. To expedite her coursework, Gibson asked permission to take classes at an accelerated rate from the dean, and she took 15 graduate credit hours (five classes) during fall and spring semesters, and 12 (four classes) during summer semesters.

I am consistently impressed with the faculty and staff at UAH, and the university atmosphere in general.

“Adam encouraged me to go back to school…I have been able to apply and immerse myself in my graduate classes at UAH, and I have even managed to maintain a 4.0 GPA. I am grateful for my family's sacrifices and support, and really see them as the true heroes in my story," says Gibson. "Certainly the most difficult part has been the past eight months.” Adam was called up for a 12-month tour, and he left in March of this year.

"My kids have made the biggest sacrifice: less time with their mom, as has my husband, who took over many of my parental duties before he deployed so I could spend time studying and in classes," Gibson explains. "This experience has been a great opportunity to be an example to my children, demonstrating the dedication needed to complete college courses. I feel confident that they have a deeper understanding of the time and devotion required of college students, and I am grateful for the lessons they have learned alongside me."

A native of Bainbridge, GA, Gibson was voted "most talented" when she graduated from Bainbridge High School at the top of her class in 1995. She completed her Bachelor of Arts degree in English at Brigham Young University (BYU) in 2002. She met Adam while attending BYU. "Marrying him was the best decision of my life. He has been active duty military for nearly sixteen years, and is an Army officer. He has completed several advanced degrees since we’ve been married, so he is a stellar example to me of dedication and hard work, with both his career, and in school.”

Always a teacher at heart, Gibson has worked as a preschool instructor, and served as a missionary for Church of Jesus Christ of Latter-day Saints in Utica, New York. When she returned, Gibson was asked to teach missionaries who were preparing for their own missions in the Missionary Training Center in Provo, Utah.

"My UAH student teaching assignments have been so informative, really fun, and truly inspiring," says Gibson. "I was assigned to Bob Jones High School assisting Mrs. Emily Polak for the first half of my internship. I now work with Mrs. Tonya Breeding at Discovery Middle School for the second half of my teaching assignment. Although the two teaching appointments are extremely different, both have been incredibly valuable and great learning experiences."

"Trace Gibson works as hard as any student in the College of Education (COE)," says Dr. Jason L. O'Brien, Associate Professor of Education. "She spent hours at a time sitting in front of her computer in one of the vacant classrooms reading and writing papers. She has had to do much of this while taking care of her family because her husband has been deployed in the Middle East. Trace is a caring and compassionate educator who puts her students first. She is one of the best students I have ever taught in my 16 years of being a university professor," O'Brien added.

"I am consistently impressed with the faculty and staff at UAH, and the university atmosphere in general," says Gibson. "I have come to love so many of the wonderful professors in the College of Education, and my English professors as well. Chantaye Robinson-Jones (Certification Officer/Academic Advisor, COE) stands out as someone who has been indispensable; without her support and guidance I don't know how I would have navigated the program," Gibson says. "So many others have guided and encouraged me as well—Dr. Jason O’Brien, Dr. Beth Quick (Dean COE), and many others have made this journey not only possible, but also really fantastic and fun; I will miss being among them. I have found some truly great friends while completing this program, among my peers as well as the faculty."

Gibson said she hears a lot about the problems of public schools, but she believe there is more that is right with the system than wrong. "I am often asked about my preference for teaching middle or high school students. "Actually, I would be happy just to teach any age…I really just love kids in general. But I must admit there is something very special about students who are in high school; they are preparing essentially for the rest of their lives, and so many of their decisions determine their future. Being with them, given the chance to inspire and encourage them…really showing them their individual worth and potential…this really is a dream job for me."

As graduation nears, it is hard for Gibson to contain the excitement she feels, because not only will she complete her goal of earning her master’s degree in English, her husband is taking mid-tour Rest and Recuperation Leave. "Adam will be home for a few weeks for my graduation and Christmas, and we are all over the moon excited to see him and be a complete family during the holidays."