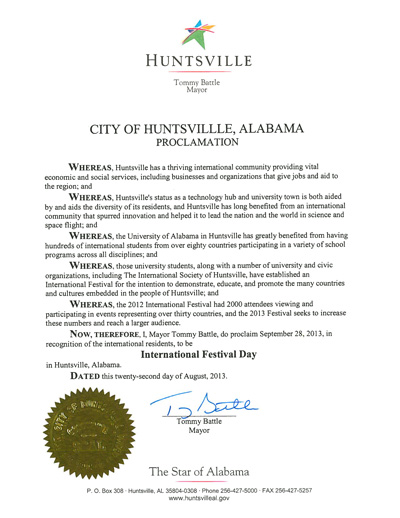 "The proclamation focuses on the impact that the international community in and around Huntsville has had on making this area a leader in the academic, economic, and technological fields," says Dr. Belinda Ong, Director of Reference & Information Services at UAH's M. Louis Salmon Library and President of the ISH. "It also acknowledges the way the international community of UAH has come together with the staff and faculty and the community at large to celebrate the diversity of the area and to promote understanding and appreciation of all it has to offer."

In just the four years since its inception, the Festival has already grown from a small one-room gathering to a truly citywide effort, responsible for fostering cultural exchange and encouraging tolerance among area residents. And Dr. Ong says that, ultimately, she hopes to see it grow to become a regional international festival rivaling those of Birmingham and Mobile - a goal that the recent proclamation will help further.

As for UAH and the ISH, Dr. Ong says co-hosting the International Festival is win-win. "The festival not only fulfills the ISH's mission to promote the international community in Northern Alabama, but it's also a great way to expand UAH's international profile and our institution's efforts to promote international education."

Per the proclamation, this year's family-friendly event will be held on Saturday, September 28, from 10 a.m. to 5 p.m. in Spragins Hall on the UAH campus. International cuisines from dozens of countries will be featured, and more than 3000 attendees are expected. Step Afrika!, one of the top ten African American dance companies in the nation, will also perform and can be seen in the video below.