HUNTSVILLE, Ala. (May 6, 2013) - Three staff members of The University of Alabama in Huntsville (UAH) are launching a bold initiative to increase student retention: the Leadership Education & Advising Program, or LEAP.

"We all have different jobs besides just this, but we truly believe in LEAP and what it's going to offer our students," said Jessica Head, Resident Director of UAH's Charger Village Residence Hall. "It's hard to start a program like this from the ground up, but we are purposely making the time for it."

LEAP is a peer-mentoring program in which first-year freshman who live on the leadership floor of Central Campus Residence Hall (CCRH) are matched with an upperclassman who will help them transition to campus life and become active members of the UAH community.

Head is joined in the endeavor by CCRH Resident Director Frank March and Assistant Director for Student Life Kacey Schaum. Their goal, said Schaum, is multifaceted.

"First and foremost it's a retention effort for the university," she said. "If incoming freshman make a connection with their mentor or get invested in the university, they're going to stay. But it's also a recruitment effort - we hope that the parents will buy into it too." 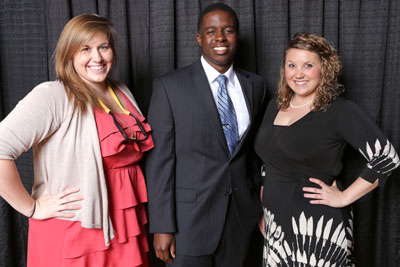 It's not a unique approach, but it is one that's been proven to work. "We've seen modeling of these programs at other institutions," said March. "And these institutions retain students at higher rates."

I vow to see a potential student leader in every student even if they don’t see it in themselves!

As it stands now, most four-year public universities have an average retention rate of 72%. So programs that focus on keeping students are undeniably critical. But they're even more critical among those who would transfer or leave school all together; their graduation rate within four years lowers to just over 30%.

This isn't the first time UAH has attempted to incorporate a leadership program into its residence halls. For the past few years, Frank Franz Residence Hall (FFRH) has had its own leadership theme community.

But, said Schaum, "when I got here in August of 2011, there was nothing really happening with leadership. So I looked at things that were working and things that weren't, and then Jessica and Frank came on board."

First, they moved the leadership community from FFRH to CCRH. Then they narrowed its scope: whereas participation was previously predicated on a general interest in leadership, now incoming freshman will go through leadership training and development programs with assistance from carefully vetted peer-mentors.

"The ratio will be one-to-one, so every student in the program will have a upperclass peer-mentor dedicated to them," said Head. "Our mentors and mentees will move in three days before the rest of campus and we'll do activities with them so they'll know each other. Then, when it comes to matching, we can match them up with who they want."

That matching is important, added March. "We've seen in previous mentoring programs that the relationships are done based on obligation, and we want it to be more natural," he said. After all, LEAP isn't just convincing incoming freshman to engage in campus life; it's convincing the peer-mentors to do so as well.

"LEAP is the mentors' connection, too, and that connection allows them to be able to retain themselves," said March. "We're not just asking our mentors to give, we want to give back to them too."

They'll also benefit from the program's specially selected Resident Assistants (RAs). "We have RAs picked for the leadership hall who can give the students so much more by living with them," said Head. "They can do programming specifically to help them, and the students can go to them for help and support." 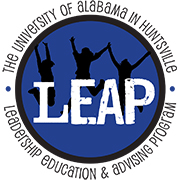 Head, Schaum, and March, meanwhile, will be gathering data. "As professionals, that's our job. Each student and mentor will have to meet with us periodically throughout the semester," said Schaum. "And we will keep track of who stayed, who left, and why they left."

Despite the fact that LEAP has yet to officially take flight, all three said support for the program has been overwhelmingly positive. "Interest has been great and we've gotten so much support from the students," said March. "Peer-mentoring is not a paid position, but the upperclassmen want to volunteer - that's their service back to the university. So the students are really on board."

That, of course, will depend on whether or not they can prove LEAP has positively impacted retention rates. Of that, the three are unanimously optimistic.

"We really think that after the first year, we'll have the statistics to show that our students are staying and doing well academically so we can get funding," said Head, who explained that the budget for LEAP is currently being split between University Housing and Student Affairs.

In the meantime, they will be doing all they can to ensure the program's success. And if that means extra hours at work, so be it. The three are willing to do what it takes.

"I vow to see a potential student leader in every student even if they don't see it in themselves!" said Schaum. "Working in housing, Frank and Jessica live with the students. And my job isn't 9 to 5 because students don't function 9 to 5. But I love it, and we all genuinely care about these students."

That's a commitment to leadership to inspire any LEAP participant.