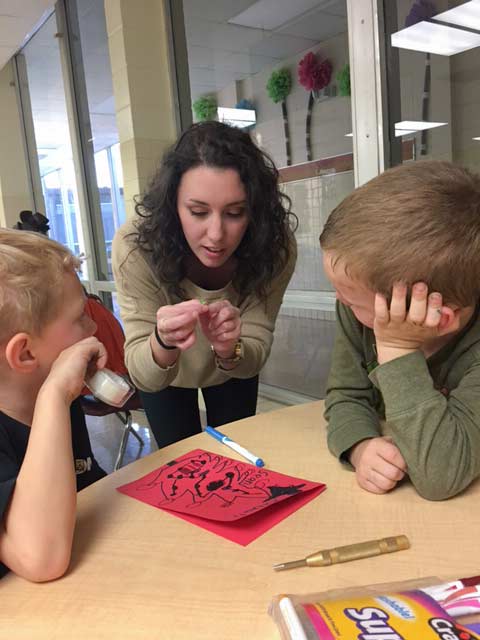 Grade school students enrolled in Scottsboro’s Club Wildcat are getting a fun introduction to science, technology, engineering and math (STEM) subjects with on-site activities conducted by The University of Alabama in Huntsville (UAH) Systems Management and Production (SMAP) Center.

Club members ride afternoon buses to Collins from the district’s kindergarten through fourth grade schools for the 3:30 p.m. to 5:30 p.m. program.

"Club Wildcat is an improvement upon the traditional after-school program that we've seen in years past," Bradford says.

The club offers an opportunity to explore a higher educational experience that's not typical during the regular school day, she says.

"While the students are with us, we try to make it an enrichment opportunity for them," Bradford says. "An after-school program is an opportunity to think outside the box of learning, where you are not being governed by a curriculum you have to meet every day. We try to have a balance of bringing in soft skills as well as bringing in the technical needs, as well as adding programs they otherwise would not have the opportunity to do in the afternoon."

Scottsboro City Schools’ mission is to "maximize the learning of all students," Bradford says.

"This program and community partnership with UAH is just one example of student learning that we offer at Club Wildcat," she says.

Dr. Gary Maddux, the SMAP Center director, says the UAH center got involved in Scottsboro as an extension of its larger STEM outreach activities, which have included routine visits to high schools and junior colleges to promote education and the technologies in which SMAP research staff is involved.

"While the primary function of the SMAP Center is research, we never want to lose perspective that we are first and foremost an educational institution. Outreach to K-12 students keeps us focused on education and the future," Dr. Maddux says. "There is nothing more important than involving young students in education. Learning is absolutely critical, but it should also be fun and exciting."

By removing the fear factor from STEM subjects, younger students should be less intimidated and more likely to become fascinated, he says.

"I have learned many lessons from my wife, who was a high school teacher, one of which is that you can’t wait until high school to get kids motivated to learn," Dr. Maddux says. "We must build a strong foundation, and that begins with our youngest students." 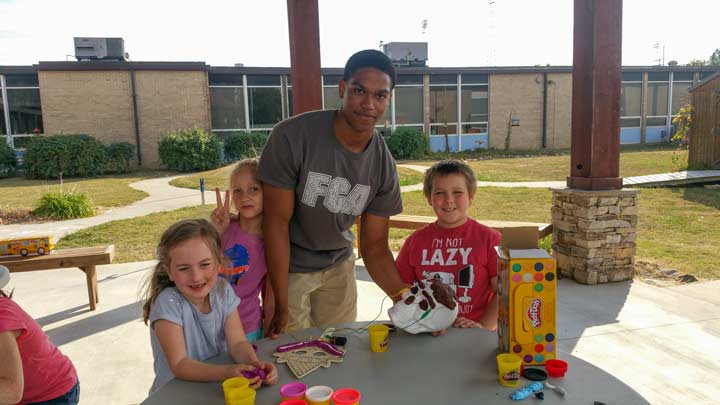 "Both Katherine and Kelsey are from Scottsboro, and both have a great rapport with young students," Dr. Maddux says. "Katherine is working on a master’s in education, while Kelsey is an undergraduate in engineering. More importantly, they have good hearts and ready smiles. They are the perfect role models for these students, and I think they enjoy it as much as the kids do."

At this grade level, Klepper says it’s more important to instill a solid foundation of the basics so students have that knowledge as they move forward in school.

"We visit Club Wildcat once a month," she says. "We started off by teaching basic electrical circuitry through a project called Squishy Circuits. The project uses play dough as one of the components to make a circuit."

"The look of amazement on the kids’ faces when they saw how we made LEDs light up using play dough was priceless," says Stevens. During the next visit, Klepper and Stevens showed the students how to make Christmas cards that light up using LEDs.

"We did this to build on the first lesson about circuits," Klepper says. "We’re basically taking things they enjoy and turning them into STEM lessons so that they feel like they are playing or making art, but it’s actually a science lesson."

"We set up various hands-on experiments to help explain a complex subject like electricity," he says. "Once we present in front of the groups, depending on the size, we allow the kids to take turns doing the experiments themselves in order to get a better understanding."

"With many kids, subjects such as math and science are associated with negative connotations," Klepper says. "If young students are taught the STEM subjects through the use of play and projects, they develop an understanding of the basic concepts through positive experiences."

During their last visit, Klepper says a girl in first grade asked when they’d be back again. "She gave me a hug and told me she loved it when we came to ‘play’ with them."

For the pair of young educators, a big part of what they are doing involves giving back to their community.

"When I was little there were many programs in place for reading, sports, music and other arts but there weren't many that promoted STEM fields," Stevens says. "Now that I am on the path to becoming an electrical engineer, I would like to share some of the things I do with a younger generation to show them why I love what I do and to hopefully steer some of their interest this way."

For Klepper, it’s about making a difference.

"If something is needed in the community and you have the information or skills it takes to meet that need," she says, "you should help out where and when you can."

The Club Wildcat effort is just the start for SMAP, says Dr. Maddux.

"We hope to continue these types of activities in other schools, especially in outlying areas. We would most like to reach rural areas that are often overlooked or have been somewhat left behind," he says. "There is much economic disparity in our state and nation – we cannot afford to waste talents. Huntsville has a wealth of opportunity, and we want every child to be able to share in these opportunities."

Dr. Maddux says he considers Club Wildcat  and other similar programs to be extremely important to the long-range economic development of Alabama and the region.

"If we are to attract new industry and continue to be a high tech leader, then our next generation of students must be excited by STEM," he says. "Our economic longevity is directly tied to the kids in this program."