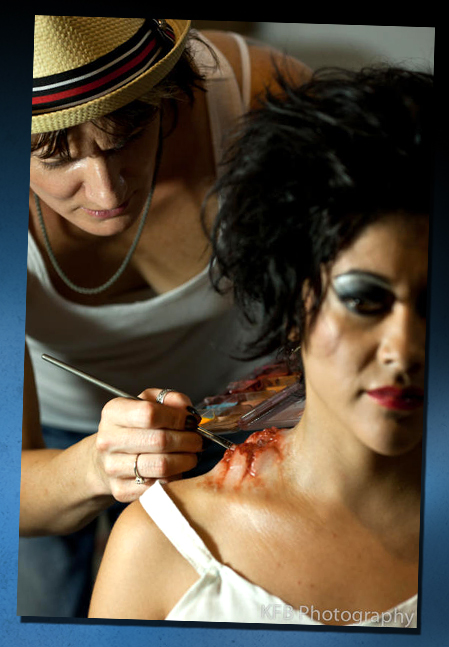 HUNTSVILLE, Ala. (October 28, 2013) - The University of Alabama in Huntsville (UAH) College of Nursing's first disaster simulation started nearly 10 years ago, with a Prom Promise "mock" car accident with first responders providing treatment - the Grim Reaper even made an appearance.

Today, the UAH College of Nursing's highly acclaimed disaster simulation event is sought out locally and nationally, serving as a mentor partner to other colleges of nursing looking to develop similar disaster nursing simulation programs.

This year's event on Thursday, Nov. 7, will feature the talent of internationally recognized special effects makeup and prop artist, Michele Mulkey, of FX Studio. Additionally, the UAH Theatre Program, under the direction of David Harwell, associate professor of Communication Arts will participate in the simulation, as will nursing students from Oakwood University, UAH campus police, and several community first responders.

"We are so excited about the success and the direction of the UAH College of Nursing disaster simulation program," said Dr. Marlena Primeau, coordinator of the simulation event and clinical assistant professor of nursing at UAH.

"This gives our senior nursing students the opportunity to experience nursing care during a mass-casualty event while reviewing core nursing concepts across the lifespan," Primeaux explained. "The program was the brainchild of Marta Browning, a clinical associate professor of nursing. Marta coordinated the yearly event until her recent retirement. We have invited her back to see the new training features for the nursing students, and to critique our first effort without her direction."

Preparations for the UAH College of Nursing disaster simulation at Charger Hospital in Wilson Hall start at 6 a.m on Nov. 7. During this time, Mulkey will also prepare moulage (makeup), casting and molding for the numerous mock injuries as a result of the natural disaster. The simulation begins at 9 a.m., with event debriefing at 11:30 a.m.

"Mulkey will conduct a Moulage Workshop on Wednesday, Nov. 6, for members of the UAH Theatre Program and College of Nursing. She will assist trainees with moulage and prosthetics at the workshop and during the disaster simulation itself," said Primeau.

Now based in New York, Muley works in television, film and theatre. Her skill as a make up artist and prop maker have been used to create numerous looks for many celebrities, including Denzel Washington, Pat Morita, Vin Diesel, Christine Lahti, Ben Stein and Jason Patric. Her work in television and feature films include The Chronicles of Riddick, The Passion of The Christ, The Haunted Mansion, The Bold and the Beautiful, C.S.I. Miami, Without A Trace, andLaw and Order: Criminal Intent. She also spent a year working with the Army doing moulage for field triage and first aid training.

Primeau said new features of the disaster simulation this year include: