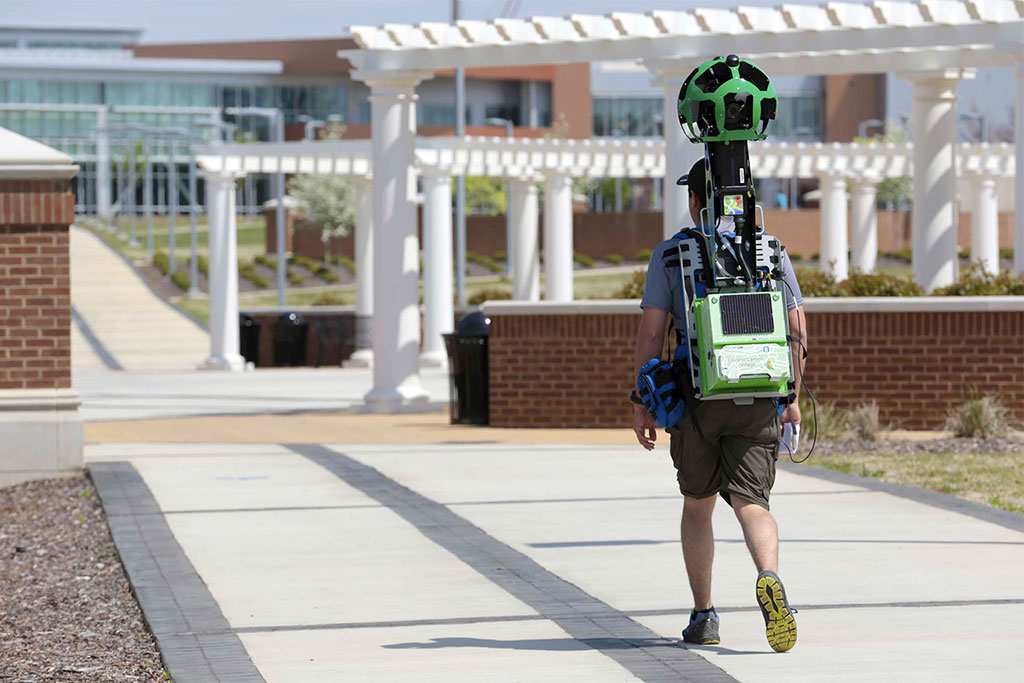 HUNTSVILLE, Ala. (May 2, 2014) – Soon you'll be able to visit The University of Alabama in Huntsville (UAH) without ever leaving your home.

Google Maps has mapped the UAH campus by creating 360-degree panoramas, or a "street view," of the pedestrian-friendly (and UAH Police Department approved) pathways that make up its interior.

The imagery collection began last week when Google Maps sent a Street View Trekker to UAH. The Trekker, Google's newest Street View camera platform, is a wearable backpack with a camera system on top. There are 15 lenses at the top of the mast, each pointed in a different direction, that enable the creation of a 360-degree panoramic view.

Now that the photos have been gathered, they will be "stitched" together using computer processing to create 360-degree horizontal and 290-degree vertical panoramic street level images. Cutting-edge face-blurring technology will also be applied to ensure the privacy of all passers-by inadvertently captured by the Trekker.

One passer-by that won't be blurred? UAH's very own Charger Blue, who was happy to have his spirited presence caught on film. Once the university's street view is enabled, which Google Maps estimates will take 2 to 3 months, he'll be visible to any keen observers of the feature.

In the meantime, those interested in visiting UAH from afar will have to settle for seeing its exterior on Google Maps thanks to the images previously captured by the Google Street View Car. Or, of course, the old fashioned way – in person!

For more information, contact:
The Office of Marketing and Communications
omc@uah.edu