This thing has all the right moves. Three University of Alabama in Huntsville master's students in software engineering decided to pump up the volume with an Android app that cranks a robot into the popular "Gangnam Style" dance.

Roslyn Brown of Huntsville, Heather Helton of Hazel Green and A.C. Williams of St. Thomas in the Virgin Islands helped create the application in their class. The robot provides electronic feedback through its cameras, and movements are controlled through the phone tilt screen.

It was a hit with the UA Board of Trustees when the students demonstrated it at a recent meeting, performing the dance steps flawlessly. The "Gangnam Style" dance video from Korean artist Psy has been viewed more than 1.5 billion times on You Tube.

Appropriately, after the robot’s performance, UAH released its own video. 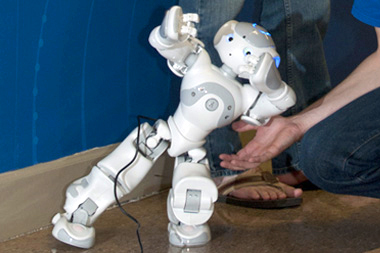