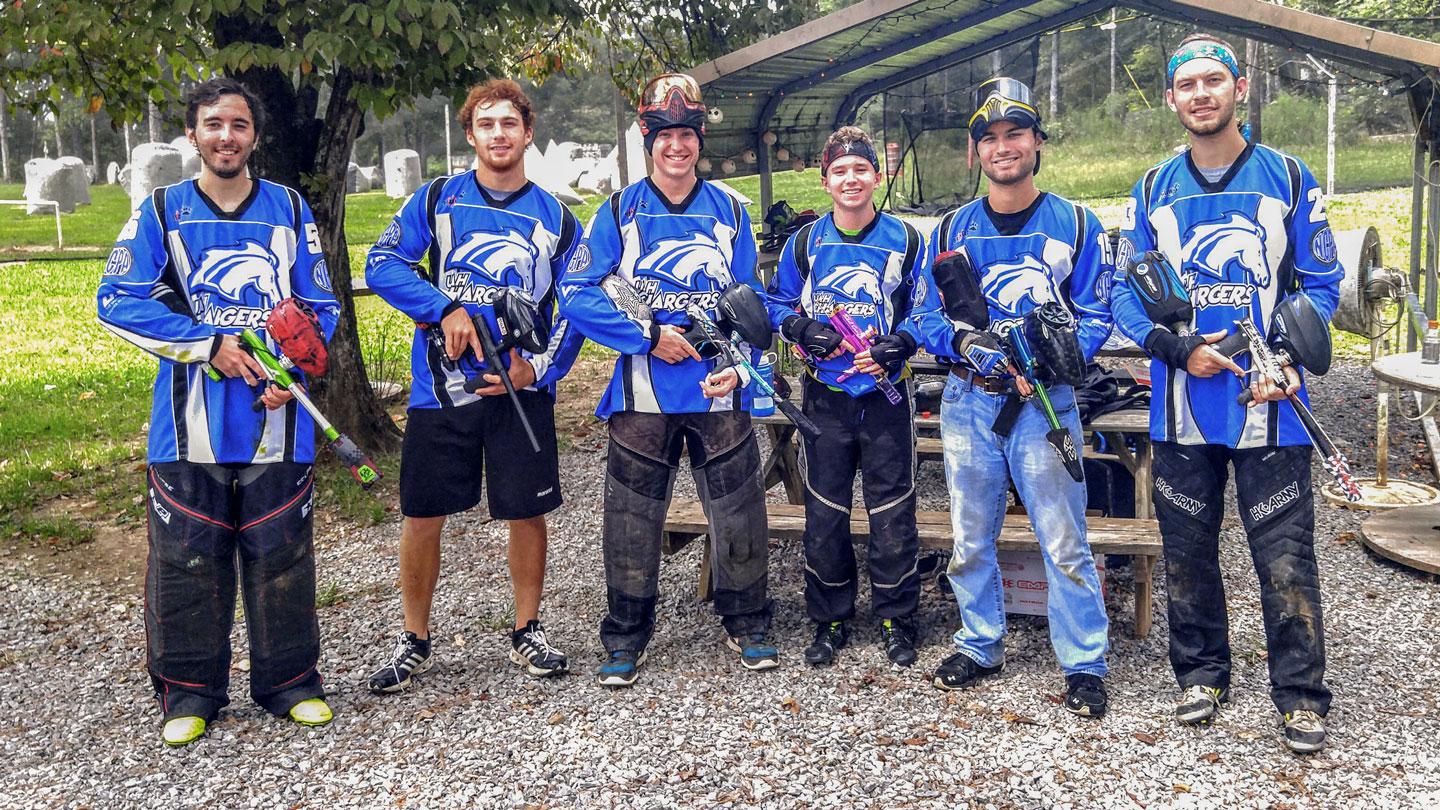 Aaron Shepperd, far right, is founder and president of Charger Paintball, a student-run organization at UAH that gives "people who like to play paintball…a way to connect."

Most hobbies are fairly commonplace; things like reading, writing, or crafting take up the spare time of most college students. Aaron Shepperd's hobby, however, takes a messier, more competitive form: paintball. "I played paintball at a 12th birthday party that I went to when I was younger and just fell in love with it," says Shepperd, an aerospace engineering senior at The University of Alabama in Huntsville (UAH). "Especially when I realized that there was a competitive aspect to it."

He spent the next nine years playing off and on in his hometown of Bonnieville, Ky. But it was his passion for aerospace engineering that eventually brought him to Huntsville. "UAH offered me in-state tuition and a really good scholarship," he says. "Plus, there's the Redstone Arsenal and NASA's Marshall Space Flight Center here. You can't really be into aerospace engineering and not want to go to the Rocket City!"

Once on campus, Shepperd soon turned his attention to what the recreational side of UAH had to offer. One look, however, told him that despite the wide variety of extracurricular activities available, there was nothing that compared to paintball. Luckily, UAH offers students the opportunity to start their own clubs, with the condition that there are already at least four people committed to joining. "I convinced my three roommates to start it with me," laughs Shepperd. "One of them had never even played before, but I needed four people so he agreed!"

What I love most about paintball is that it’s really different. I love the teamwork involved, and the fact that you can play no matter your skill or experience level.

Dubbed Charger Paintball, the club was officially up and running in 2013 with then-sophomore Shepperd serving as its president. "I just wanted to create a network of people who like to play paintball as a way to connect," he says, adding that there are no membership dues and publicity is mostly word of mouth. His fellow executive committee members include vice president Kyle Schikore, secretary Kyle Worley, and treasurer Luke Sacco.

The club itself comprises two divisions: a tournament one and a recreational one. "I'm more into the competitive aspect of it, so I deal with the tournament side," says Shepperd. Club member Austin Martin, meanwhile, is in charge of the recreational side. "I don't have time to run them both, so Austin helps make sure no one who is new to paintball kills themselves!"

The tournament team attends roughly four tournaments a year, which Shepperd says are stricter in nature than recreational games and require members to have their own gear. "We always encourage new members to try out recreational play before committing to the tournament team, because the equipment can be very expensive and we don't want anyone spending hundreds of dollars on a paintball gun if they end up not liking it," he says.

So far, there's been no shortage of interest; the club's mailing list is just shy of 250 people. Whenever Shepperd schedules a practice, which he tries to do about once a month, he simply sends a message via email and GroupMe and anyone who is interested can attend. 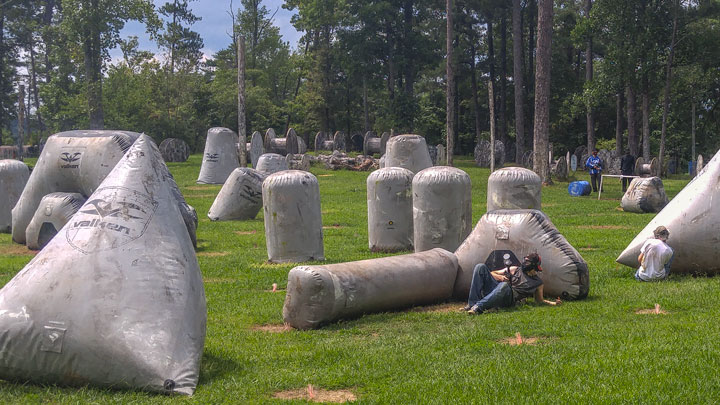 During practices, tournament team members stay with Shepperd, while Martin introduces new members to the game, which in itself is not overly complicated: get shot once, and you're out. "It's a last-person-standing kind of thing," says Shepperd. "If you get shot, you have to stand with your hands on your head and walk off the field. That way you won't keep getting shot with paint!" The paint is usually a bright orange color, but is washable and even edible. However, says Shepperd, "I always tell people not to wear their Sunday best!"

As for the game's objective, there's more to it than just shooting opponents. "There's a flag in the middle of the field, and the last person left in play has to pick it up and take it to the other team's starting position," says Shepperd. "Technically, a team could win if they managed to get the flag there with all of their opponents still in the game, but it's extremely hard to do without getting shot." Once the flag is retrieved, the winning team then earns a point and the game restarts.

"Our motto is 'Shoot, Move, Talk' - you have to keep moving and keep communicating, because the layout of the field changes with every game to keep people from getting too good," says Shepperd. Teams also have to avoid being given penalties by the referees. In professional games, there is usually a referee assigned to each player to make cheating more difficult; at the tournament level, three referees are usually assigned to watch both sides. "Doing things like mouthing off to them or continuing to play after you get shot can earn you a penalty," he says.

Currently, the club holds most of their games and practices at either Bear Claw Paintball in Fayetteville, Tenn., or Mt. Doom Paintball Field in Hanceville, Ala. "I'd love to put in a paintball field at UAH," he laughs, "but seeing as how the low-end estimate is around $30,000, it's not really doable at the moment!" Shepperd's main concern, however, is not where they play the game, but the game itself. "What I love most about paintball is that it's really different," he enthuses. "I love the teamwork involved, and the fact that you can play no matter your skill or experience level."