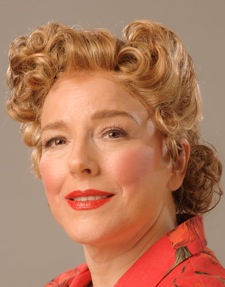 The performance will begin at 6:30 p.m., in the university’s Louis Salmon Library Art Gallery. The presentation is sponsored by the UAH Women’s Studies Program and the library, and is free and open to the public.

Huntsville writer/actress Dorothy Weems portrays her mother, Ruth Wolfe Weems, in a stage adaptation of Ruth Wolfe Weems’ stories and memories as an American Legation employee in The International Zone of Tangier during World War II. For Ruth, who had a front seat to one of the greatest eras of history, 1940’s Tangier was the quintessential “Casablanca” experience, with political intrigue, mortal dangers, genteel romance, acts of heroism, and the keeping of most important secrets. Dorothy Weems weaves her mother’s wartime stories (written and oral) into a tapestry of that fascinating era, and plays the role of the older Ruth reliving her youthful experience in Miss Wolfe’s Tangier Stories™.”

Miss Wolfe’s Tangier Stories™ made its world debut at the American Legation in Tangier in Summer 2012 as part of an international performance conference, which meant a built-in audience of theatre experts from Morocco, Europe, and North America, many of whom were particularly impressed with the performance. The standing room only crowd commented they felt they could "see" the Tangier of the Forties in the performance.

This will be the final program of the spring semester Coffeehouse Writers series, co-sponsored by UAH Women’s Studies and the UAH Salmon Library. For further information, contact Marylyn Coffey, 256-824-6114, coffeymt@uah.edu.