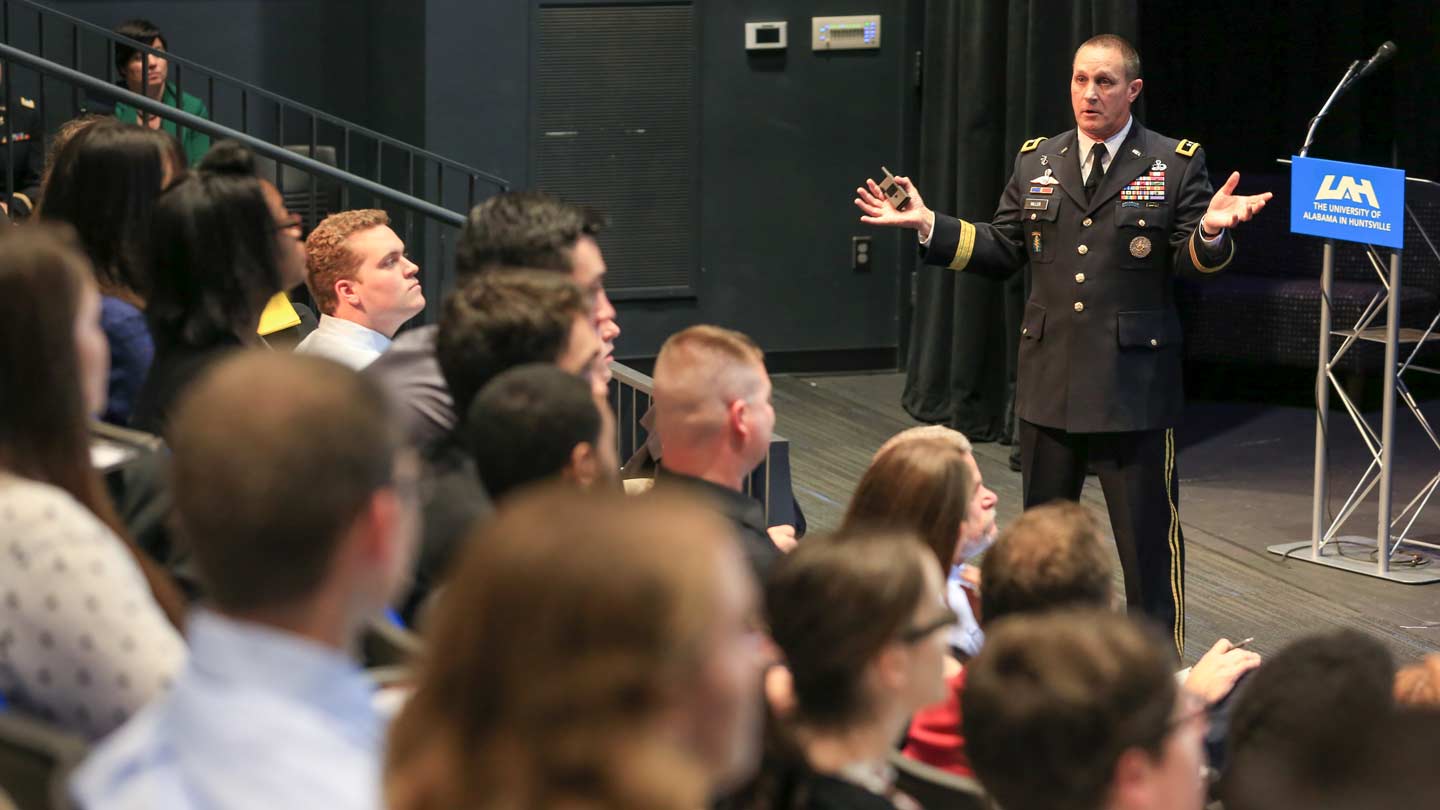 U.S. Army National Guard Maj. Gen. Harry Miller brought a team from the Defense Intelligence Agency (DIA) to speak with students at The University of Alabama in Huntsville (UAH) on Friday, Nov. 3 about careers at the DIA.

"It is a team and it is a family," said Miller, who is the mobilization assistant to the DIA’s director and who has a 37-year military career, as he spoke at the event coordinated by the UAH Office of Career Services. "If you want to become part of something that’s bigger than yourself, then we’re what you’re looking for."

"We’re heavily engaged on a global level," said Miller, who is the principal advisor to the DIA director regarding the effective integration and employment of Reserve forces supporting the DIA from across the services. He also serves as the director of the Reserve Integration Office and as a special assistant to the DIA director.

DIA has seven internship programs and also entry-level employment opportunities to which Miller and the DIA team introduced UAH students during the session at the Charger Union Theater and a career fair held immediately afterward in the Charger Union.

DIA operates across domains including space, air, cyberspace, surface and subsurface, Miller told the students. The agency’s scope of operations includes the strategic, operational and tactical domains of U.S. defense, he said.

"What’s really cool about it is that you have the opportunity to interact and impact at all these levels," Miller said.

The team accompanying Miller from DIA included the DIA lead recruiter; career development officers; the chief of technology operations for the director of operations, science and technology; and an employee of the Missile and Space Intelligence Center.

"UAH students will benefit by networking with Maj. Gen. Miller and his team and gaining insight into the DIA’s candidate selection process," said Candace Phillips, Career Services senior coordinator. "UAH is one of very few schools in the region they are visiting and we are honored to host them."

The Office of Career Services strives to connect students to opportunities that will lead them to lives as successful alumni, Phillips said.

"It’s no secret that experiential learning is a catapult to your career," Phillips said. "Students that participate in internships and co-ops have a very high placement rate at graduation. In turn, the DIA has an over 90 percent conversion rate of interns to full-time hires. That percentage is a testament to the work the students are engaged in and something we are excited our students can take part in."