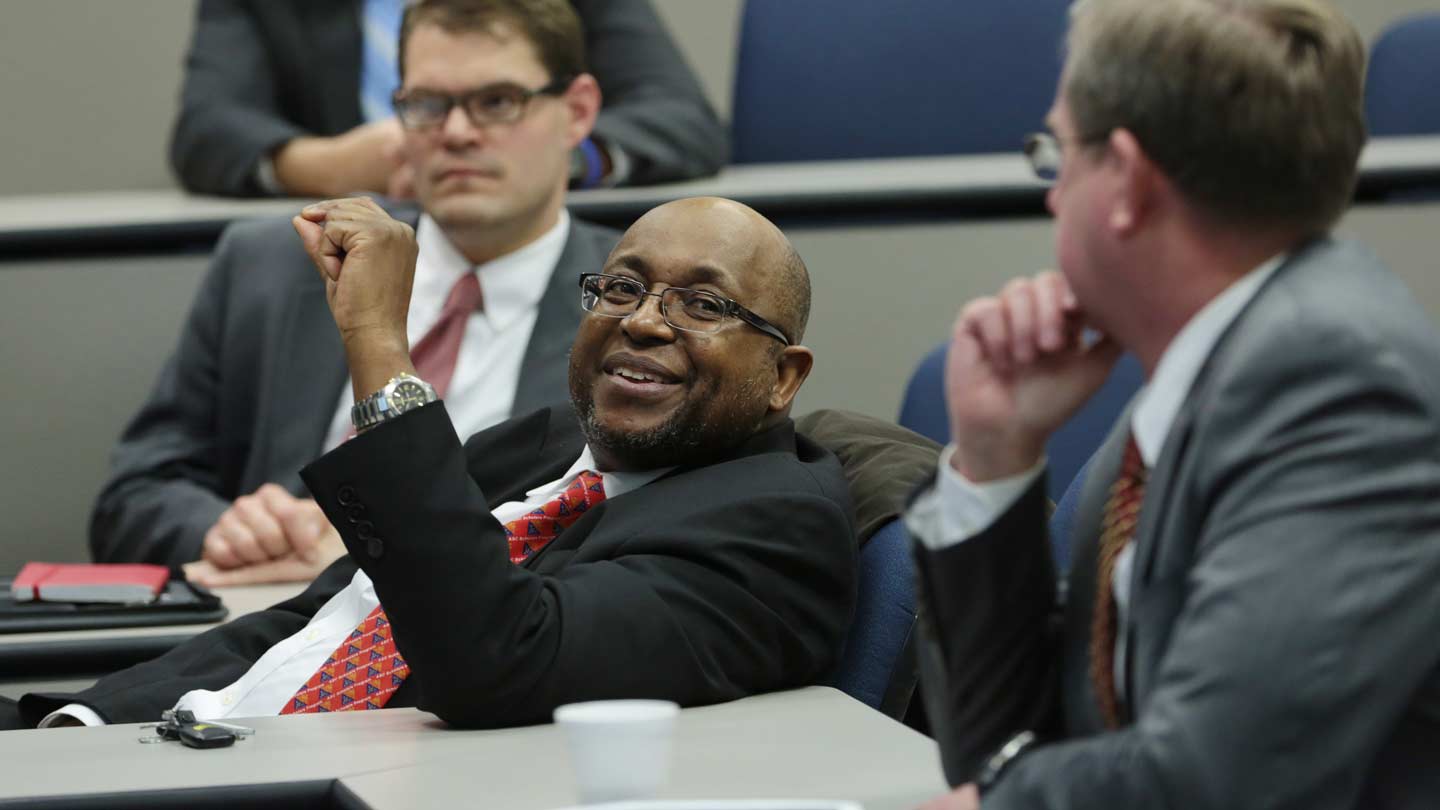 Dr. Willie May, center, acting director of the National Institute of Standards and Technology (NIST) reacts during a meeting at UAH. At left is Harrison Diamond, City of Huntsville business relations officer. At right is Bob Lott of the Tennessee Valley BRAC Committee.

The military cybersecurity leadership role of Huntsville and Redstone Arsenal, the area's cyber potential and its economic and population growth were hot topics Thursday, Dec. 11, in a meeting between city cyber, military and business leaders and Dr. Willie May, acting director of the National Institute of Standards and Technology (NIST).

The informational meeting, requested by Dr. May, happened during a workshop on the NIST Framework for Improving Critical Infrastructure Cybersecurity. The invitation-only Southeast Regional Interactive Workshop was sponsored by Cyber Huntsville, hosted and cosponsored by The University of Alabama in Huntsville (UAH) and cosponsored by Deloitte, Mission Multiplier Consulting and All Points LLC.

During the conference, held in UAH's Business Administration Building, Dr. May also heard from leaders about the city's skilled engineering workforce and educated population.

Cybersecurity efforts underway at Redstone Arsenal were outlined and Dr. May heard an update on Cyber Huntsville activities, accomplishments and the organization's vision for the future.

"Innovation is crucial to us," said Mike Ward, senior vice president of
government and public affairs at the Chamber of Commerce of Huntsville-Madison County, noting that Huntsville ranks 10th in the nation in Small Business Innovation Research (SBIR) awards and that the city has the highest concentration of engineers in the United States. That educational advantage makes Huntsville a powerhouse, he said.

"We have a highly educated workforce that is interested in educating their children highly, as well," Ward said.

Redstone Arsenal represents 9 percent of the gross domestic product of the State of Alabama, May learned. For the past five years, Redstone has made coordinated efforts to assess and remedy cyber vulnerabilities in the nation's defense system capabilities.

"The story is that Redstone Arsenal is the center of gravity for the security of our country," said Bob Lott, a member of the Tennessee Valley BRAC Committee.

Over 200 area cyber and cybersecurity technical professionals came to UAH for the daylong conference. NIST is a non-regulatory federal agency under the Dept. of Commerce headquartered in Gaithersburg, Md. A NIST certification is important because it supports and develops measurement standards for a particular service or product.

The event was part of a series of such meetings being held by NIST pursuant to U.S. President Barack Obama's Executive Order 13636, "Improving Critical Infrastructure Cybersecurity." The order directs NIST to work with stakeholders to develop a voluntary framework for reducing cyber risks to critical infrastructure.

Version 1.0 of the Cybersecurity Framework, released on February 12, 2014, was developed in an open manner with input from stakeholders in industry, academia, and government, including a public review and comment process, workshops and other means of engagement.

"In the time since the framework's publication, NIST's primary goal has been to raise awareness of the framework and encourage its use as a tool to help industry sectors and organizations manage cybersecurity risks," said Dr. Ray Vaughn, UAH vice president for research and economic development. "The purpose of this workshop is to gather input to help NIST understand stakeholder awareness of, and initial experiences with, the framework and related activities to support its use."

Cyber Huntsville offered to host one of the workshops NIST is conducting around the country because the Alabama and the Huntsville community have a vested interest in critical infrastructure protection. Cyber Huntsville, a 501(c)(6) non-profit organization, is made up of industry, government and academic institutions that are dedicated to making Huntsville and the Tennessee Valley region a nationally and internationally recognized cyber leader.

"UAH, as a member of Cyber Huntsville, offered to host the workshop on campus and to support it," Dr. Vaughn said. "Critical infrastructure protection is a research area at UAH, so this workshop is consistent with our research interests."