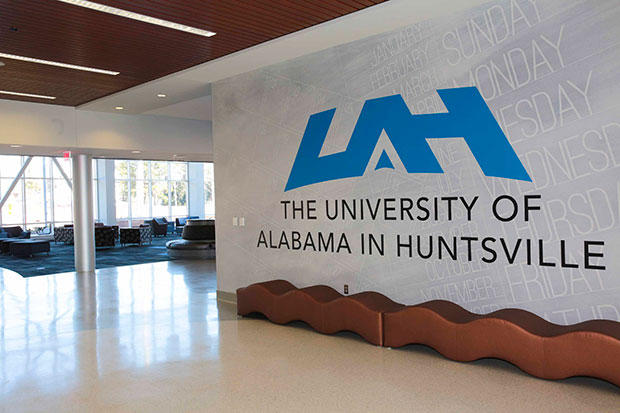 HUNTSVILLE, Ala. (Jan. 23, 2014) - It turns out The University of Alabama in Huntsville (UAH) is a lot more than just "the rocket school." At least that's what Merrilee Hertlein, Senior Associate at Mackey Mitchell Architects, found out when she was tasked with branding the campus' new $25 million Charger Union.

"We thought we'd be doing a lot of rockets and solar systems - those kinds of things," says Hertlein. "But from the students we heard, 'Yes, that's our history. But that's not what defines us.' So we had two days of focus group meetings where we spoke with different groups about what makes UAH special."

The answer? Lots of things! In fact, she says, all you have to do is look around the Charger Union and you'll see plenty of design elements that reflect the traditions and values that the university and its students hold dear.

"For instance, right when you walk into the building, there's a welcome desk that is formed out of the letters U, A, and H," she says. Up on the second floor, hoof prints grace the ceiling of the walkway, while outside, LEDs shine blue light onto the building at night.

But there is also a subtler, more powerful theme woven throughout the Charger Union, and that is a sense of community and connection. Hertlein says the groundwork for that was laid from the very beginning; the building's design is aptly named 'The Bridge.'

"The concept came about because of the greenway - the goal was to be a bridge connecting the campus to the community," she says. "So the Charger Union is both conceptually a bridge and a literal bridge over the university's greenway."

The Charger Union really provides an opportunity to transform the culture of the UAH campus.

And there are plenty more examples inside the building. Take, for instance, the suspended herd of horses charging across the north lounge. "The idea for that was really about how, when you're a new student you come to campus on your own, but then you have this opportunity to join a community - a herd," says Hertlein.

Or the large, digital, international map that hangs in the Charger Union. Originally, she says, the idea was to hang a clock from every student's country of origin. "But that was going to be a clock from every country showing every hour of the day!" she laughs.

But perhaps the most effective, and visually impressive, design element is not inside the Charger Union. Rather, it's the building's exterior, which does an impressive job of tying together the eclectic campus landscape.

"One thing we noticed when we first came to UAH is that, as the campus has evolved over time, there wasn't necessarily an architectural style," she says. "So we used materials from all the other buildings to construct the Charger Union and connect the dots."

Taken all together, Hertlein believes these design elements add up to a lot more than just branding. "The Charger Union really provides an opportunity to transform the culture of the UAH campus," she says. And to her, that's what it comes down to - and why she enjoys working on student unions as opposed to, say, water treatment plants.

"I've had experience doing that," she says with a laugh. "But being able to work with students and create the space that supports their learning environment is very fulfilling." Especially, she adds, at UAH.

"As part of a firm that works with university clients, I was extremely impressed with the UAH team and their focus on making sure that no matter what, they created a building that was what the students wanted," she says.

And in this case, that was something far beyond just rockets!