Chamber of Commerce, UAH team up in area’s economic development 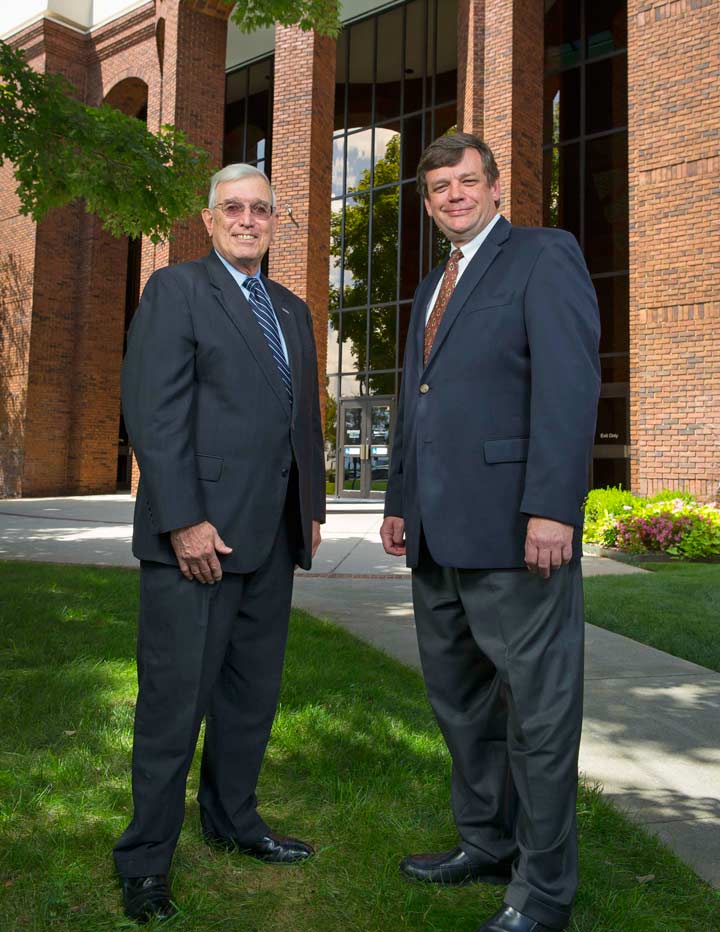 UAH's Dr. Ray Vaughn, left, and Chip Cherry of the Chamber of Commerce of Huntsville/Madison County.

When a strong team has a good record and an excellent playing field, world-caliber performance can take place.

The nationally recognized research done at The University of Alabama in Huntsville is closely interwoven with industry and government, and that is a powerful economic development tool, says Chip Cherry, Chamber president and CEO.

"We have enjoyed an unprecedented level of private sector success, and that's because companies can see that they can succeed here," Cherry says. "That's because there's a rich heritage here, with UAH being essential to our ability to provide the type of cohesion that is attractive to prospects. That's essential because unity among local officials and institutions is something you can't fake when a company is looking to locate in the area. Now we're in the mode where we have great opportunities."

"Most universities assign the mission of economic development to their vice president of research, because of the direct relationship between research and the proliferation of research products into commercial uses and business startups," Dr. Vaughn says. "We partner with the Chamber of Commerce, and we're supporters of their initiatives. We're part of the Huntsville team that recruits to this area. People are amazed at what this community can offer, and they are just as amazed that they didn't know anything about it before."

"When we try to attract businesses to Huntsville, one of the advantages we offer is a nationally recognized university with research centers and laboratories in place to aid those companies," he says. "But UAH is not responsible for economic development in the area. That job belongs to the Chamber of Commerce and other entities. Our job is to add value to and multiply that effort."

Dr. Vaughn cites the team effort by the Chamber, Madison County and UAH at the Paris Air Show in June.

"We went together over there and talked as a single entity with organizations that might want a presence here locally," Dr. Vaughn says. As an example, the director of the Mexican Space Alliance visited in July and representatives of the Belgian aerospace alliance visited in October. Some 40 Belgian companies are involved in aerospace work.

"At the end of the tour, UAH representatives were asking who they should look to hire in order to best position themselves if something happened. This was only the feasibility study, and UAH was already looking ahead to what would be needed if a company came," he says. "Deloitte told us this type of attitude is quite unusual to find elsewhere in the country. When you start going through the process of looking for somebody to locate here, you realize just how much this is different from other places."

The research being done at UAH is especially attractive to prospective businesses, Cherry says.

"I realize there is theoretical research that's being done at UAH, but a lot of the research done there is more oriented toward a product coming out of that pipeline," he says. "UAH is looking at the whole area of intellectual property and asking the question, 'How do we leverage that to grow the economic vitality in the area?' I think this also has bearing on UAH's efforts to establish an incubator on campus."

He's referring to the Invention to Innovation Center (I2C) project, a business incubator that UAH is planning to build and manage.

"When companies start up, they typically have from one to four employees and not a lot of money," says Dr. Vaughn. "Part of our economic development role is to foster the startups and new companies that are commercializing some of the new technologies that are coming from Redstone Arsenal and NASA."

There's an advantage to a nationally recognized research university being the anchor tenant in the nation's second-largest research park, and that's UAH.

The center will provide reduced rents to startups and young companies that will share basic business services and common areas there.

"As the company grows, it hopefully will graduate to spaces that are available in Cummings Research Park," Dr. Vaughn says.

Attracting existing companies to the area is another important facet of economic development. UAH was part of pre-decision visits made by Polaris Industries and Remington Arms Co., both of which ultimately located in Huntsville. The university's product- and production-oriented research means that newly locating companies can find ready resources at UAH for R&D efforts, Cherry says.

"We are going to be a center of excellence for Polaris' Ranger," he says, "and that represents a major part of that company's business."

It was space pioneer Dr. Wernher von Braun's vision that UAH would work closely with local companies. "Von Braun was a very charismatic guy," Cherry says, "and he was able to get to the right people at the right time."

"My view is that UAH grew up differently than any other university," he says. "This university grew primarily to support NASA and Redstone Arsenal, and we are still executing that mission."

UAH's next-door neighbor, Redstone Arsenal, has grown from a center for rocketry into a base that now supports 72 functions with 125 Senior Executive Service officers on base. "The sphere of influence there is amazing," Cherry says. "UAH's history, as it has evolved to be tied to Redstone Arsenal, NASA and the Chamber, is unique. We are joined at the hip."

The university's geographic proximity to industry, the Arsenal and NASA make for a major regional plus, Dr. Vaughn says.

"There's an advantage to a nationally recognized research university being the anchor tenant in the nation's second-largest research park, and that's UAH," Dr. Vaughn says.

"As an original anchor tenant in Cummings Research Park, UAH has been an excellent resource and partner working with and meeting the needs of the agencies on Redstone Arsenal, NASA and our business community," says Erin Koshut, director of Cummings Research Park. "I am certain that UAH's continued growth and advancements will continue to go above and beyond to meet the needs of our companies and prospective industries that call or are interested in calling Huntsville home."

UAH faculty have contributed to recruitment efforts by producing economic impact studies and business planning and filling the frontline roles Cherry says are played by UAH's colleges to provide research, student interns and the educated workforce necessary to economic diversification.

The university's strength regionally and nationally lies in the technical and high-level specialty degrees it provides. "Most of our graduates stay close to home, because that's where there's the greatest need for them," says Dr. Vaughn.

"Our community could not have grown and evolved in the way that it has if not for UAH and its capabilities," says Cherry. "Our ability to demonstrate that we can support and provide advanced degrees to folks who then go out and become an engaged and productive workforce is crucial. The integration of academics with the business community here is much different than how it is in other communities. We are bound together by common goals. The key to our success, I think, is our mentality."

"We have our traditional lines of business, in aerospace and defense, but then also we are on the cutting edge of software development and cybersecurity," Cherry says. "UAH has demonstrated its ability to get in front of that whole emerging field."