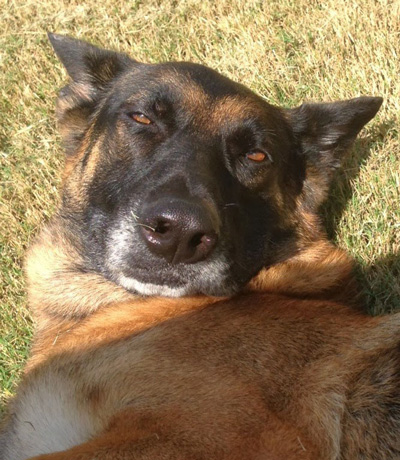 HUNTSVILLE, Ala. (Nov. 12, 2013) - Cathy Palmer of the Huntsville Obedience Training Club (HOTC), will give the talk "The Art and Science of Dog Training," on Thursday, Nov. 14, on the campus of The University of Alabama in Huntsville (UAH).

Palmer's talk will begin at 11:10 a.m., in the University Center Exhibit Hall. Her visit is sponsored by the UAH Honors Lecture Series. Palmer's talk is free and open to the public, and will center on systematic methods of communication with dogs, how to read dogs for purposes of training and the art of applying those methods to an individual dog.

She first became interested in obedience training in 1995 when she adopted a Border Collie mix named Shadow who was very shy and dog aggressive (lacking social manners). Palmer said she thought she knew a lot about dog training from the family farm but soon learned that training Border Collies to herd does not make you an expert trainer.

"Feeling defeated, I took a class with Shadow and my life has not been the same since," Palmer said. "I fell in love with obedience and general manners training. I learned how to deal with Shadow's problems and those of subsequent foster dogs. I became specifically interested in problem solving and I teach a class called Beyond Manners which is about general manners and problem solving."

Palmer's association with HOTC began when she enrolled in a class. She later joined HOTC and has been taking and teaching classes ever since. Later she became involved with rescue, and fostering dogs with special problems.

When it comes to training dogs, Palmer said, both animal and owner have lessons to learn.

"It is not difficult to train a dog. It just takes patience, consistency and clear communication," she noted. "The clear communication is the part to be learned because you need to understand how the dog thinks and that the communication is similar, but not exactly the same as with humans. There are several rules of thumb, but I'd have to say that my favorite is: If the dog is doing something wrong, clearly tell him what to do. This falls under the heading of communication, which is my primary focus.

"Obedience training is teaching specific commands. General manners involves using those commands but is broader to include general behavior training, such as not jumping on people, and not stealing food. A dog can know lots of commands and still not be well mannered," she said.

Palmer noted, too, that dogs are making huge strides medically and socially. For example, "some dogs can sniff out cancer, and others serve as calming dogs for people with social or mental issues. There are also hearing assistance dogs, much like the well known 'seeing eye dogs.'

"More along the every day nature, dogs can reduce your blood pressure and promote a feeling of well being and purpose. They are very good at knowing your moods and providing comfort when you are upset. I have experienced this many times. Dogs are generally good judges of character. I've known of many cases when an otherwise friendly dog didn't like a certain person and the owner later found out why," she said.

For several years, Palmer was in charge of the AKC's Canine Good Citizen program at HOTC. She also volunteers at their annual Dog Fair. She has been a board member of the Spay Neuter Action Project (SNAP) in Huntsville, and served as treasurer for several years.

For eight years, Palmer was on the Animal Care Committee of the Greater Huntsville Humane Society. When not training dogs (including her own) she works as a software engineer at Siemens, PLM in Huntsville.